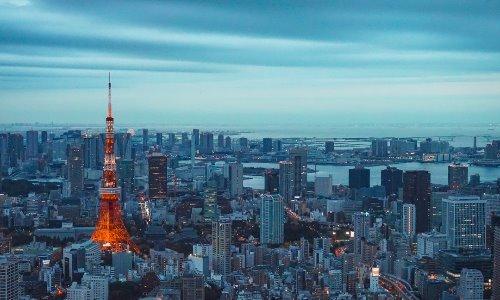 One of the 47 prefectures of Japan, Tokyo otherwise known as Tokyo Metropolis is the capital of Japan. Home to the Emperor of Japan and the de facto seat of the Japanese government Tokyo as one of three large cities and is located on the southeastern side of the main island Honashu on the Kanto plain and includes the Ogasawara and Izu Islands. The other two cities Kawasaki and Yokohama are situated along the northwestern shore of the Tokyo Bay.

Tokyo’s central region formerly known as Edo which when translated in English means “estuary” was only recognized as the capital of Japan in 1868 when Emperor Meiji’s seat was moved from the old capital of Koyoto to the city. In 1943 after the unification of the former Tokyo Prefecture and the city of Tokyo, Tokyo Metropolis was formed and today with a population of over thirty-seven million is acknowledged as the most populous metropolitan area in the world and the largest urban agglomeration economy in the world.

▪  Tokyo is home to 51 of the world’s Global 500 Companies and boasts the highest number in any city. The region which hosts a variety of television networks such as Tokyo Broadcasting System and Fuji TV was recognized in 2014 by the Globalization and World Cities Research Network as a world center and was also ranked first place by TripAdvisor as providing visitors with the “Best overall experience.”

▪  The average size of a one bedroom apartment in Tokyo is usually around 170 square feet. Japan’s unique “Capsule hotels”, contain tiny capsules or boxes which are roughly about 10 square meters and include a bathroom unit just the size of an airplane lavatory.

▪  Tokyo’s subway is by far one of the most busiest in the world used by millions of passengers daily.

▪  Japan’s Harajuku Fashion Walk is held every two months where hundreds of people gather in Harajuku to walk through the streets highlighting their taste in fashion.

▪  Tokyo Metropolis enjoys a low crime rate and although the city is not without incidence, the streets are generally safe throughout the day and even late at night. Moreover you will find police stationed at several street corners throughout Tokyo in booths called koban where they spend most of their time providing information to persons looking for directions which is a much needed service given the lack of a systematic street address system in Tokyo.

▪  One of the primary concerns with public safety in Tokyo is the anticipation of the next major earthquake which many analysts have predicted is long overdue considering that Tokyo has traditionally has a major earthquake every seventy years. As such Tokyo considerably maintains several open areas throughout the city as parks to be used as a form of shelter for homeless persons following the event of a major earthquake.

▪  The first emissions cap system to reduce the amount of greenhouse gas emissions was put in place by Governor Shintaro Ishihara with the expectation of lowering emissions by the year 2020 by as much as 25%.

▪  Tokyo Metropolis is the leading industrial center of Japan and boasts a highly diversified manufacturing base with a concentration of its heavy industries in Yokohama, Chiba and Kawasaki while Tokyo conversely focuses mainly on light industry and include the manufacture of electronic equipment as well as the printing and production of books. In addition Tokyo is home to many of Japan’s leading financial institutions such as the Tokyo Stock Exchange and several large corporations such as the communications giant NTT.

▪  Tokyo was significantly affected during the 1980s by Japan’s economic boom which transformed the city into a global financial hub rivaling the United States and parts of Europe. This economic surge caused many analysts to speculate on Japan’s real estate, given the fact that the rise in land prices had provided an upswing in the value of the yen. And although the economy leveled out during the early 1990s, Tokyo’s real estate has remained as Japan’s most expensive investment and even ranks by close comparison on a global scale. Towards the end of the 1990s Tokyo’s economy was again affected however not as an economic upswing but rather came as the beginning of a tentative recovery from Japan’s most severe recession period since the end of the second World War.

▪  Entry into Japan is based on a number of complicated policies of Japan’s Ministry of Justice and the Immigration Bureau. Visitors who are citizens of the United States and scheduled to stay for a period not exceeding ninety days are required to have a valid passport and a short-term visa. However persons from the United States planning for a longer visit are generally required to obtain a student visa.

▪  As an island nation Japan’s most efficient means of access is by way of air. For the most part many of the incoming flights to Japan arrive by way of New Tokyo International Airport at Narita.

This webcam is made possible by way of a joint venture between EarthCam and TokyoSky.com to allow viewers a unique view of the canal around Chuo City close to the center of Tokyo.

This live webcam installed on the center of Kobe Chinatown (Nankinmachi) on the island of Honshu in Hyogo offers viewers a live video of this area filled with statues of mythical animalistic flags, statues of dragons and Chinese lamps used as a form of decoration.

This webcam is located in Japan and gives a live view of Mount Fuji, the highest mountain in Japan with a peak at an altitude of 12,389 feet.

This webcam gives a live view of Hiroshima, Japan. This is the city where the first atomic bomb was dropped by the USA. On this camera you can see the Hiroshima Genbaku Dome various buildings and more on a PTZ remote control camera. Image updates every second.

Live webcam located in Susukino, Japan. Watch traffic and party goers in Japan having a blast and whatever.

Here you can see the famous Sasayama Castle located in Japan. This is a PTZ remote control webcam so you can move it around and do some sightseeing.

This webcam is located inside a flower shop in Daikon, Japan. This is a PTZ webcam that you can remotely control and move around. See beautiful flowers and watch people buying and selling flowers.

This webcam is located inside a laundromat in Japan. Watch people doing laundry or sitting around on the Coca Cola tables waiting for their clothes to dry.

Watch from inside a dentist office in Hachinohe City, Japan. See dentists cleaning and fixing their patients teeth and such. Two different views to choose from. Streaming video.

Watch inside a home located in Miyako, Japan. You can see a couch, TV and through their window. You may see a dog sleeping on the couch or people that live there watching TV.

Not sure if this webcam is in the recent earthquake and tsunami disaster area, but adding this one. This appears to be in Uwajima or Ehime, Japan.

Here is another webcam located in an unknown city of Japan. It may be possible to use to monitor disaster recovery in the area.

This site has four different webcam views from Tokyo, Japan.

This webcam is located in Tokyo, Japan and gives a live view of the city, skyline and famous Times Tower.

Awesome view of Mount Fuji in Japan as seen from Lake Saiko.