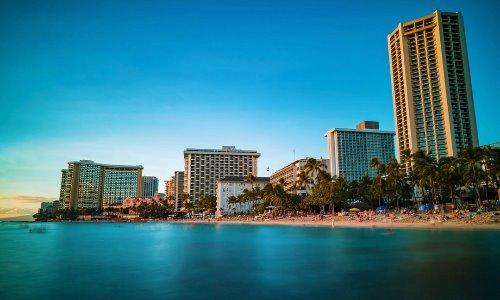 Located on the south shore of Honolulu Waikiki, Waikiki Beach is featured in the link below. Known as Waikiki for short, the Oahu islanded beach was used as a retreat for royalty in the 1800. They would escape to the beach and used what is now known as the first longboard to surf.

The video is being filmed in the first person perception as the camera person strolls throughout the beach and along the Shoreline. Due to issues with erosion the beach has undergone beach replenishment projects to reconnect the beach to its shoreline.

Throughout the footage an array of tourist attractions can be seen such as statues, umbrella seating, storefronts, an outdoor volleyball court and hotels.

The Waikiki Aquarium Web Cam
The featured video is of the Waikiki Aquarium located in Hawaii. The man made habitat consists of what appears to be beam bags placed to section off the location. There is a gate leading up to the exhibit which houses a Hawaiian Monk Seal.

The Monk Seal has used the Waikiki Aquarium as found shelter since December 15, 2011 after being abandoned by its mother on the Hawaiian island of Kauai. Considered as having the world finest gathering of fishes by an international renowned biologist David Starr Jordan. 2004 marked the 100th year anniversary of the aquarium and caused this aquarium to become the third longest running aquarium in the United States.  The Waikiki Aquarium first opened on March 4, 1904.

The webcam pops in and out of different locations around the island of the Waikiki beach located at the Sheraton resort styled hotel. Located in the downtown area of Honolulu the Waikiki beach area is known as a popular tourist area. Attractions include shopping areas, nightlife entertainment, and ideal waves to surf on. There is also an art walk on the ground floors of the Hotel.

The walk is called Arting-in-Place and consists of collaboration of art pieces from an arrangement of young talented artist and another group artist whom were native to Hawaii. This project took place in September of 2009.

The statue of Duke Kahanamoku welcomes visitors of the Kuhio Beach in Hawaii.  Duke is considered as a hero having won multiply Olympian competitions. He was awarded the gold in 1942 after completing the 100-meter freestyle relays.

Camera number 72 which is featured in the link below shows live footage of the H1 ramp traveling west bound throughout Oahu, Hawaii. Originally numbered Hawaii 72 the highway is demonstrating an upward traffic trend which has made H-1 well-known for its heavy traffic. The highway runs through Honolulu International Airport, Waikiki Beach and Koko Head.

Even with the upgrades completed by way of construction and new routing procedures to the Los Angeles like freeway, additional plans are still required to decrease the highway congestion. The webcam link features several different lanes heading in different directions on the busy highway.