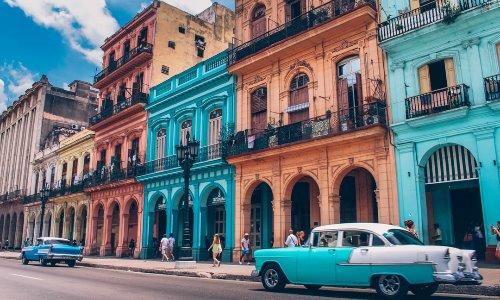 Cuba is the largest of all the Caribbean islands, almost as big as all the others put together and is located at the entrance to the Gulf of Mexico with its western end only 145 km or 90 miles from Florida’s Key West.

Cuba extends more than 1,300 km or just over 800 miles in its length. At its widest point the island measures an estimated 124 miles, and about 22 miles at its narrowest. The island comprises of an archipelago of over 1,600 isles and cays, with the largest being the Isla de Ia Juventud or Island of Youth located south of Batabanó Bay. Cuba is sheltered by several coral reefs, to the northeast the coastal beaches face the Bahamas and Atlantic Ocean, and to the south, Jamaica and the Caribbean Sea.

Cuba’s offshore isles, islets, keys, and rocky sandbars which number more than 4,000, and are grouped in five archipelagos. The largest cay, the Island of Youth, has been inhabited since prehistoric times, the other cays worth a visit have been partly transformed into modern-day beach resorts each boasting superb white sands and excellent facilities for deep-sea rushing, swimming, and sailing.

The Pinar del Rio region is of course most famous for producing the tobacco that goes into the best Havana cigars. Yet tobacco accounts only for a small fraction of the region’s farmland. Fields of sugar cane blanket the eastern plains and are met by rice paddies which fill the marshlands south of Los Palacios. Cattle herds can be seen grazing the foothills of Guaniguanico while grapefruit, and oranges are grown in the western area around Sandino.

Three mountainous regions account for more than a third of the island’s total land mass. In the south eastern oriental region, The Sierra Maestra, which includes Cuba’s highest mountain peak, Pico Turquino stretches from Cabo Cruz to Guantanamo and is abundant in flora and fauna.

▪  Dense sub-tropical forest covers Cuba’s humid lower mountain slopes, providing valuable timber products. Woods which can be found on the higher, drier slopes consist of mainly pine and eucalyptus. The island boasts an amazing assortment of palm trees, the best known being the royal palm which is indigenous to Cuba.

▪  Sugar and its derivatives are the island’s principal source of revenue, closely followed by tobacco, the Cuban cigar however is still the most sought after in the world and the favorite contraband within the United States. Cuba’s other sources of revenue include agricultural produce such as beans, coffee, fruit, maize and rice, fisheries and cattle.

▪  Cuba’s population is just over 11,000,000 with more than 20% living in Havana, the largest city in the Caribbean. Other major cities include Santiago de Cuba, Camagiiey and Holguin.

▪  According to official census figures, 70 per cent of Cubans are white, 12 per cent black, most of them in Oriental provinces, and 17 per cent mixed (mestizo and mulatto). It is generally agreed, however, that the percentage of “mixed blood” is much higher, as much as half the population. (The island’s Caribbean Indians were almost totally wiped out under Spanish colonization.).

▪  The island’s climate is agreeably sub-tropical, most often around 25°C (77°F), rising to an average 28°C (82°F) in July and August and “dipping” to 22°C (71°F) in the coolest month, February. The east, especially the mountains, gets more rain than the west. The hurricane season is from June to November, most likely in September and October and more often in the west around Havana and Pinar del Rio than in the east. Storm winds can reach 250 kph (156 mph). Swimmers take note: Caribbean waters are slightly warmer than the Atlantic.

▪  Cuba is much safer than other Latin American countries—and many places in North America. Pickpockets, however, work the tourist areas of Havana and the resort towns. A much sought- after item is your passport, so keep it well-protected. Street-corner hustlers (jineteros) are an inevitable offshoot of tourism and economic difficulties, but beggars and anyone else that hassles you can be shooed off with a calm “Por favor, no moleste “— “Please, don’t bother me.”

▪  The island has a well-developed network of roads, with a main highway linking Pinar del Rio to Guantánamo, more than 1,120 km (700 miles) away, and several good coastal highways between the resorts. Driving is on the right. The rules follow Western European and North American norms and speed limits—50 kph (30 mph) in town, 90 kph (56 mph) on paved country highways, 100 kph (62 mph) on the Autopista Nacional. To rent a car, you must be 21 or over, have a valid driver’s license and preferably an internationally accepted credit card (not drawing on a US bank).

▪  Besides a passport, still valid for at least six months after you enter Cuba, you should obtain a tourist card (tarjeta de turista), usually provided by your travel agency or tour operator. Keep it safe during your stay as you will need to hand it in when leaving. (US citizens are discouraged only by their own government, not at all by Cuban authorities, who give them a warm welcome if they come equipped with an appropriate tarjeta de turista and will not put a potentially embarrassing stamp in their passports.)

▪  Upon entry, DVDs, DVD players and computers with incorporated player will be confiscated at customs. When you leave Cuba, customs officers are always on the look out for cigars, so if you buy them, keep your official receipts. The free export limit without a receipt is 23 cigars per person. US customs will confiscate Cuban cigars.

▪  Christopher Columbus disembarked on October 28, 1492, somewhere between Gibara and Guardalavaca. Following threats of mutiny and an overnight rain- storm, he wrote with undisguised relief in his journal: “Everything I saw was so lovely that my eyes could not weary beholding such beauty.”

This webcam which is located on Havana street in the capital of Cuba allows online viewers a view overlooking the street.

The Centro Habana: CubaCam Webcam is the first webcam is Havana. The webcam which is currently assigned to Ercolla was originally added in 2007 and one of the few active webcams which can be found in Cuba.