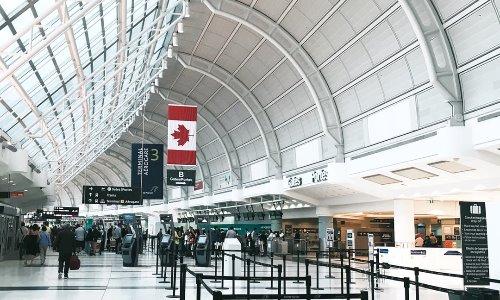 The city is also the capital of Ontario. The airport is specifically situated 22.5 kilometers or 14 miles northwest of downtown. The two main terminals belonging to the airport are actually situated in the city Mississauga.

The airport is named after Lester Bowles “Mike” Pearson who won the Nobel Peace Prize in 1957 for his work organizing the United Nations Emergency Force. He was a soldier, diplomat, statesmen, and scholar. From April 22nd, 1963-April 20th, 1968 Pearson was the 14th Prime Minister of Canada.

Toronto Airport is a hub for Air Canada, WestJet, and FedEx Express. It is an operating base for Sunwing Airlines and Air Transat. Greater Toronto Airport Authority, or GTAA, is responsible for operating the airport. GTAA works as part of Transport Canada’s National Airport System. In total there are 8 Canadian airports with facilities for United States border clearance, and the Toronto Airport is among them.

The history of the Toronto Airport began in February of 1935. this was the time it was announced that Canada’s Government would build an airport in the city. The specific location for the site was Malton. A couple of years later, in 1937, agents from the Toronto Harbour Commission sought out those who lived on the land.

Most of these individuals were farmers and the agents spoke to them and made agreements to acquire the land. In total 570.9 hectares were acquired, or 1,410.8 acres. Some of the farmers sold plots that were as large as 80 hectares or 200 acres. The very first airport terminal and office was the Chapman farm house.

Map of the Toronto Airport

The second terminal was little more than a wood frame building and it was erected in 1938. A year later the airport hosted its first scheduled passenger flight, which was a Trans-Canada Airlines DC-3. The No. 1 Elementary Service Flying School was operated at the Malton Airport during the second World War.

A third wood frame terminal was built in 1949. In the 60s the airport underwent some major construction and it was replaced by the Aeroquay One Building, which was opened by Prime Minister Lester B. Pearson.

The Aeroquay One Building has been demolished since that time. The airport took on the name of the Prime Minister in 1984. Would you like to see what the current airport looks like? Here is a link to the Toronto Airport map.

If you would care to take a peak inside the Toronto Airport check out this video.

The video shows you what it is like landing and taking off from the Toronto Airport. It gives a fairly thorough view of the inside of the airport and the travelers who pass through. You will be able to see specific areas of the airport as well as a few restaurants and shops inside.

If you should ever pay a visit to Toronto you will be a little more familiar with it and have a better idea of what to expect. To track airplanes that are coming and going from the airport go the the Toronto Airport flight tracker.

There are over 2 million people who live in the city of Toronto. It is the fourth most populous city in North America and it is also a prominent and popular area to go to for music, motion picture productions, television productions, and theatre. There are countless galleries, events, museums, national historic sites, festivals, and various things to do in the city.

Have you ever been to Toronto? Would you like to see what the area is actually like? One of the very best way to experience Toronto without actually going there is by looking at live, streaming webcams of the city. Not all webcams offer live feed but many of them do.

At the very least any good camera will provide you with a recent image of the area. Even if you have been to Toronto, live webcams give you a good idea of two important factors that are actually happening now—the weather and the traffic. If you aren’t in the city or even in a specific part of the city you may not know these factors.

To view the weather and traffic in Toronto check out this street view. The webcam should update every few minutes to show you a recent image.

Here is a view of the Canary District in Toronto. The webcam lets you look at multiple views, zoom in, navigate left, right, up, and down on the image.

This webcam gives you a look at the Toronto skyline as well as the CN Tower. This building is 1,815 feet, or 553 m high. It is an observation tower which was made out of concrete. Built in 1976 the CN Tower was the world’s tallest tower at that date. “CN” originally stood for “Canadian National.”
The structure is widely recognized and associated with Canada, and it is, in fact, Canada’s National Tower.

To view one of the Great Lakes in North America, Lake Ontario, this webcam is near Toronto and refreshes every few seconds. The word Ontario is actually of Wyandot (Huron) origin and it is translated “lake of shining waters.”

In French it is called Lac Ontario. It is the 14th largest lake in the world but the smallest (as far as surface area) of the Great Lakes. It actually has more volume than Lake Erie, however.