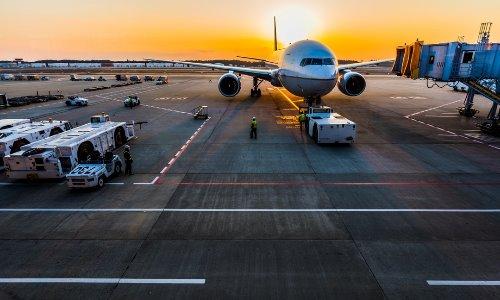 The airport is seen as a location which facilitates the landing, take off maintenance and storage of various aircraft including, helicopters, fixed-wing aircraft and blimps. A typical airport will generally consist of at least one surface runway for the aircraft to land and take-off, a helicopter landing pad as well as a number of buildings serving as terminals, hangars and control towers.

Airports which are considerably larger in structure will often consist of seaplane docks and ramps, a fixed base operator services, passenger facilities including restaurants, gift shops and lounges, air traffic control as well as a number of on-site emergency services. Within the United States an airport which is used for military purpose is commonly referred to as an air station or airbase, while an airport located in a body of water, generally a lake or river allowing amphibious aircraft and seaplanes to land and take-off is known as a seaplane base.

The expression airstrip, airfield and aerodrome is frequently used to refer to an airport, while the terms seaplane base, STOLport and heliport are reserved for locations known for facilitating, short take-off and landing aircraft such as seaplanes, and helicopters.

In everyday use, the words aerodrome and airport are regularly substituted. Nonetheless the use of the term airport may indicate or bestow a level of importance to the aviation facility not yet achieved by the aerodrome. In many territories however the term airport is seen as a legitimate jargon specifically reserved for a certified or licensed aerodrome or airport by the appropriate government statutory authority overseeing the approval and regulation of civil aviation. Having said that, not all aerodromes can be classified as airports, however all airports are legally recognized as an aerodrome.

▪  Airports which are considerably smaller or less developed representing a vast minority will often consist of a single and short runway just over 3,000 feet of grass, gravel or dirt. Larger airports however known for facilitating airline flights are known for including longer and paved runways made from concrete or asphalt normally over 6,000 feet.

▪  The Qamdo Bangda Airport in China is known for having the world’s longest public-use runway with a total length of 18,045 feet while the Ulyanovsk Vostochny Airport in Russia is recognized as having the widest paved runway in the world at a width of 344 feet.

▪  The Central Intelligence Agency in 2009 reported that there were over 44,000 recognizable airports in the world the majority of which were located within the United States of America numbering 15,095.

▪  Most of the airports within the United States are known for leasing part or all of their facilities to independent firms, who control functions such as parking, and retail management.

▪  All commercial airport runways within the United States are certified under the Federal Aviation Authority Code of Federal Regulations (CFR) sometimes referred to as the administrative law.

▪  Depending on the air traffic density and accessible funds, an airport can be towered or non-towered. However many international airports due to their high capacity and engaged airspace are known for including an air traffic control (ATC) system by which ground-based controllers will direct aircraft movements through radio communication to a tower-controller who controls the aircraft on the runway as well as in the controlled airspace surrounding the airport.

▪  Major airports in countries such as Japan and Russia are known for renting by the hour small-scale sleeping units inside the airport, the smallest of which can be seen in Japan’s popular capsule hotel.

▪  Although seen today as facilitating only general aviation traffic, the world’s oldest and continually operating airfield today is recognized as the College Park Airport in the state of Maryland, United States. Founded by Wilbur Wright in 1909 the airport was established by the United States Army Signal Corps to function as a training location used by Wright brothers, Wilbur Wright to instruct two officers in the United States military to fly the government’s first airplane.

Pennsylvania Erie International Airport recognized in 2004 as the third fastest developing airport in the United States offers a live broadcast from the airport via an onsite webcam.

Switzerland’s largest international airport the Zurich Airport, also known as the Zurich Kloten Airport features a number of live on location webcams offering viewers a first hand view of aircraft landings and hand-offs at the facility as well as to keep track of the activities and happenings at the stands, follow the next clearance at dock B or a peek at the maintenance depot, fire department and airport tower.

Founded in 1993 by the Washington Pilots Association in formal support of the air search, rescue and disaster relief the Aviation Division of the Washington State Department is primarily responsible for the management and conduct of all aerial search and rescue operations within the state of Washington.

The department via their online website features a number of online webcams overlooking the Boeing Field including the KBFI Northwest, and Southwest shown in the link below.

Here you can view live webcams from various airports and heliports around the world. Watch airplanes and helicopters take off and land. Some cameras are located inside the airports so you can do a little people watching while you’re at it.

This Heliport webcam is located at the Kahului Heliport in Hawaii and lets you watch helicopters take off and land from Blue Hawaiian Helicopter Tours in Maui. If you are planning to visit Hawaii and want to take a tour, be sure to keep this company in mind!

Live LAX webcam courtesy of ABC7. Reload the browser to get the latest image.

This is an excellent streaming video webcam of the Los Angeles International Airport. Watch traffic going in and out of the airport and see the lighted columns changing color at night. Two thumbs up.

The Helipad Klinikum Garmisch-Partenkirchen webcam gives a view of a what appears to be a helicopter pad possibly used for medivacs near a hospital.

This is a view of the Bornholms Lufthavn airport in Denmark. Webcam provides streaming video of the taxi area, part of the runway and control tower. You can also see the wind sock to see how windy it is. You can also take snapshots and view previous photos.

This airport cam is located at Crites Field in Waukesha, Wisconsin on runway 28. This is a cool camera that has pan, tilt and zoom with preset positions, too. Updates every second.

This airport webcam is located at the Air Service Center Helipad – Meteo Pilot in Italy.

Live view of the Amsterdam Airport from the Sheraton Hotel. Shows the runway and terminals 24 hours a day.

This airport cam is located at the Recreatief Vliegveld Grimbergen airport in Belgium. That is Grimbergen Airfield in English.

These cameras are located at the Port of Friday Airport on San Juan Island, Washington. Four different views to choose from – see the runway, current weather conditions, wind sock, traffic and more.

Here you can see current weather, wind and visibility conditions at Archuleta County Airport in Colorado.

The Island Airways airport webcam is located in Beaver Island, Michigan and has three different views to choose from.

Provides a live view of LAX Los Angeles International Airport with streaming video and gives a view of the famous Theme Building.

This webcam is located at Split Airport in Kastela Croatia. Gives a view of the runway and taxi area 24 hours a day. Camera updates every 30 seconds.

This airport cam is located at London Oxford Airport and is the main regional airport in Thames Valley. Check the OXF weather webcam for current conditions before flying in or out.

This is an awesome airport cam that gives a live view of Runway 25 at Los Angeles International Airport in California. Watch planes taxi on the runway and taking off. Cool!

Another live view of LAX airport in Los Angeles, California. See the terminals and airplanes on the runway. Image updates every few seconds.

Watch planes taking off and landing at Kampong Wing Loong airport in Singapore.