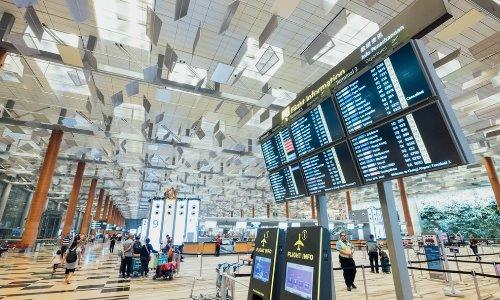 Most locals refer to the Denver International Airport as simply “DIA.” It is located about 25 miles northeast of downtown Denver, Colorado.

As far as land area is concerned DIA is the largest airport in the United States with 53 square miles or 34,000 acres.

DIA also has the longest public use airway in the country. Runway 16R/34L is 16,000 feet or 4,877 feet long. In 2014 DIA was ranked 5th busiest airport in the United States and 18th busiest in the world. The airport had 53 million passengers that year. In the country it is also known to have the third largest domestic connection network.

The airport provides nonstop flights to locations around North America, Latin America, Asia, and Europe. It is a main hub for Frontier Airlines as well as Great Lake Airlines. DIA is the fourth-largest and Central U.S. Hub for United Airlines and it is a major focus city for a Southwest Airlines.

Denver International Airport is operated by the City & County of Denver Department of Aviation. Readers in Business Traveler Magazine voted DIA as the best airport in North America for a few years in a row, from years 2005-2010. In 2002 Time Magazine also named the airport “America’s Best Run Airport.”

One of the most intriguing aspects of the DIA airport is its unique roof over the Jeppesen Terminal. Designed by Fentress Bradburn Architects, the peaked roof is made out of teflon-coated fiberglass. Colorado is well known for it’s Rocky Mountains and this is what the peaks symbolize—snow capped mountains. They also bare a resemblance to many years ago when Native American tepees used to be seen on the Great Plains.

DIA puts a large emphasis on art. The airport has used a reserved portion of its operation and construction budgets for artwork. One of the most noteworthy pieces of art on the airport grounds is “Mustang” by El Paso born artist Luis Jiménez.

This early piece of artwork depicts a blue mustang with burning red eyes standing up on his hind legs, it can be seen when going to and from the airport. The head of the sculpture fell on Jiménez when he was working on it, killing him. “Mustang” has garnered mixed reviews.

While some people are struck by wonder when they behold the 32 foot sculpture others are revolted. In fact, it has garnered some rather villainous names, including the “Devil Horse” “Satan’s Steed” and “Blucifer” due to its dark and lurid expression and pose.

If you are interesting in booking a flight at DIA or learning more go to their official website.

The Denver International Airport was erected to replace the Stapleton Airport which exists about 20 miles away from DIA. For three years during the 80s the Denver Regional Council of Governments looked for locations to build a new metro airport.

They looked at six different places from 1980-1983. construction of DIA began undergoing planning in 1989. Federico Fabian Peña, Denver Mayor at the time, was leader of the project. After a couple of years the project was handed over to Mayor Wellington Webb.

Initially the airport was scheduled to open October 29th, 1993, but it was bumped up another couple of years, finally serving as a replacement for the Stapleton Airport in 1995.

Map of the Denver International Airport

The Jeppesen Terminal is called the land side of the airport. People may enter the terminal
through road access or attached parking garages. Aside from the Jeppesen or main terminal there are 95 full-service gates on three different concourses. The pedestrian bridge connects the main terminal to Concourse A. As travelers pass over this mostly-glass bridge they can see airports taxiing beneath them.

The tour gives clips of the Main Terminal beneath the mountain-shaped roof as well as the different areas within the B Concourse which caters to United Airlines.

It gives a view of the Rocky Mountains, Downtown Denver, as well as the shops within the airport. This flight checker lets you view all of the flights coming from and going to the Denver International Airport. Using the flight tracker you can keep in touch with a specific flight or just look at the activity in that area.

If you happen to be traveling through Denver free webcams can be a great resource to utilize. Here are some webcams situated around the area to help you get a better feel for Denver and the area surrounding DIA. It can give you a more clear idea of the traffic and weather at the present time.

This webcam of the Stapleton Airport takes photos of the area on a daily basis. The airport is only a few miles from DIA.

Here is a camera which can be used to look at the traffic and weather in the Denver area.
If you will be skiing in the high country tap into this free webcam of Beaver Run in Breckenridge Colorado. Breckenridge is about an hour and a half from downtown Denver.

Denver is commonly coined as the “Mile-High City” because it is a mile, 5,280 ft, or 1,610 m above sea level. The city is the the state capitol of Colorado and it was established in 1876, exactly 100 years after the United States was founded in 1776.

One of the biggest reasons that people came to live in the area was because of the gold rush. Here is a webcam of downtown Denver. Although the camera does not offer a streaming feed it should refresh frequently.

This is a live webcam viewing the Aspen Mountain ski area. The Rocky Mountains are one of the biggest mountain ranges in the world. The range goes all the way from Canada, through the United States, and into Mexico.