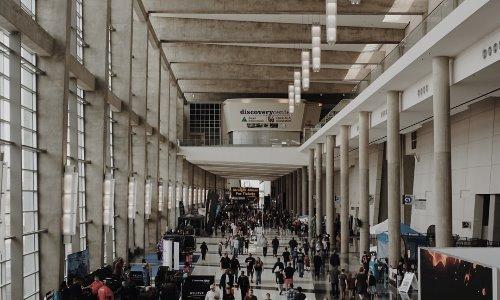 It is also frequently called Hartsfield or Hartsfield-Jackson. Since 1998 the Atlanta Airport has been dubbed the world’s busiest airport by passenger traffic. It has also been one of the busiest airports when it comes to the number of landings and takeoffs.

In 2012 it handled 95 million passengers. Much of Atlanta Airport’s traffic is domestic flights within the States, particularly the Southeastern United States.

The Atlanta Airport is the sixth international gateway to the United States. It has services which travel to various places around the world, including locations in Africa, Asia, Central America, Europe, South America, and, of course, North America. The airport houses Delta’s Technical Operations Center as well as Delta Air Lines corporate headquarters.

On April 26th, 1925, Mayor Walter Sims leased 287 acres on a rent-free lease that lasted five years. The leased land that the Atlanta Airport would eventually be built on was once inhabited by the Atlanta Speedway, an abandoned racetrack. Sims was the one who decided that the land would be an airport and he set the gears in motion for it to be built.

The agreement to create the airport also included that the name should be Candler Field. Asa Candler was the former owner of the land and also a former Atlanta mayor. The very first flight into the airport took place on the date September 15th, 1926.

From the very start Atlanta Airport was a very busy place. Several years after the airport was up and running it was already third for regular daily flights. The only airports that ranked higher in this regard were Chicago and New York City. By the time 1930 was almost over there were 16 flights arriving at and departing from Atlanta Airport on a daily basis.

During the second World War, in 1940, the airport was used for military purposes. Candler Field was operated alongside Atlanta Arm Airfield by the United States Army Airforces. During this time the airport doubled in size.

It even had a record-breaking 1,700 takeoffs and landings on one singular day. According to flight operation is became the nation’s busiest airport. After the war the Atlanta Army Airfield was naturally closed.

Map of the Atlanta Airport

Candler Field was renamed Atlanta Municipal Airport in 1946. On September 21st, 1980, the airport was opened after construction and came out with a new title—this time it was William B. Hartsfield International Airport. Hartsfield was a former Mayor of Atlanta and he did a lot to help promote the airport.

On October 20th, 2003, the Atlanta City Council decided that the airport should be named Hartsfield-Jackson Atlanta International Airport, which is what it is known as today. This change of names was for the purpose of honoring mayor Maynard Jackson. He had died that same year. There are a few specific terminal maps of the airport which can help you find your way around.

This virtual tour of the Atlanta Airport will give you some clips from concourses A-F as well as some other general facts about the airport itself:

This ten minute video allows future visitors of the airport to see just what each concourse is like. Atlanta Airport is the busiest airport in the world, as you will see from clicking on the link.
Aside from some general information about the Hartsfield-Jackson Atlanta International Airport the video also looks closely at a few planes flying through. The Atlanta International Airport allows you look at the status of arriving and departing flights.

Because the airport is such an important location for many travelers there are plenty of individuals who are curious about the airport itself as well as the city it is stationed in. If you are one of those people there are many ways to satisfy that curiosity.

One of the best ways to do so is to look at webcams of the surrounding area. This can give you an insider’s look at not only real places in Atlanta, but from cameras that are capturing live feed. This lets you see what the city is like at this very second. Not all webcams offer live feed and keep in mind that there might be a big time difference from where you live. Here are a few great webcams.

This airport actually features webcams that let you view parts of the airport. View two online cameras that stream live footage of the airport. The first video gives you a clear look at at runways 08/26 left and right, facing south. The second webcam views runways 09/27 left and right, and it is facing north.
Traffic can be hectic in Atlanta. There are a number of different webcams which will provide a look at different streets and highways across the city. This webcam lets you look at the city of Atlanta and the traffic going and out of the city. You can also see the capital building from this camera.

For a fantastic view of downtown Atlanta. This outlook is 400 feet above the city’s midtown studios. The large city offers many attractions including parks, museums, aquarium/zoo, theaters, and sights and landmarks. Not only is Atlanta the state capital of Georgia it is also its biggest city.

If you like baseball check out this webcam of the Atlanta’s Brave’s baseball park which is currently undergoing construction. The Braves have been known as one of the most successful franchises in baseball.