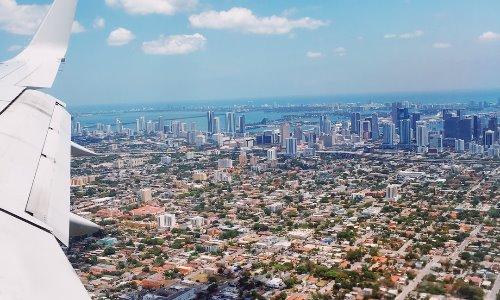 Eight miles northwest of downtown Miami is the Miami International Airport, or MIA. MIA is the primary airport which serves the city of Miami Florida.

The airport also has burrowing owls which live at home on the airport grounds, as they have for as long as anyone can remember. This special type of fowl was recently endangered but several years ago they were moved off the endangered list. The owls have learned to happily coexist with the airplanes passing to and fro on the runways.

To learn more about the Miami International Airport visit their website.  From here you can look at driving directions, parking options, passenger services, and more.

The MIA airport has its roots with Pam American Airways. In 1927 the executives decided to move their company’s base from Key West to Miami. That year they bought 116 acres from the Semicole Fruit and Land Company along NW 36th Street. From there they proceeded in building the airport. This first terminal initially consisted of one single hangar.

The city government of Miami established a Port Authority in 1945 and raised enough bond revenue to buy the airport which was, at the time, still operated by Pam American Airways. They purchased 223 acres. At this point the airport had been renamed 36th Street Airport.

In 1949 the airport merged with the nearby Army airfield and a couple of years later, in 1951, the railroad line had to be moved south so there was more room for the growing airport. By this year the airport had grown to 2,878 acres. From 1949-1959 the Air Force Reserve troop carrier, in addition to rescue squadrons, operated from the airport.

In 1959 the 36th Street Airport closed and the modern passenger airport took its place and opened. The Air Force unit was relocated to Homestead Air Force Base, now known as Homestead Air Reserve Base. In 1948 the airport was renamed Miami International Airport.

Map of the Miami International Airport

The South Terminal has concourses J and H with 28 gates. The primary terminal at the airport dates back to the year 1959, since then there have been multiple additions. This terminal is shaped like a semicircle and has one linear concourse. The terminal also had five pier-shaped concourses. Look at this map of the MIA airport to get a better idea of where each terminal and concourse is located.
Interested in the Miami International Airport? Take a minute out of your day to view this brief HD video.

The video link gives you a short look inside the walls of the MIA airport. Every airport is a little different and the clip will give you some familiarity with the Miami International Airport so that, when/if you ever travel through, you will know a little about what to expect.

This MIA flight tracker is brought to you by the airport itself. Simply submit information about a flight you want to look for and the website will track the flight.

Here is a view of Taxiways and Rwys 08/26 left and right. This camera is located right on the airport grounds.

To see a live webcam that monitors the activity of burrowing owls, such as the ones living at MIA, click here. (http://www.earthcam.com/usa/florida/browardcounty/?cam=burrowingowl)

This is a live view overlooking the Biscayne Bay. This webcam is a short distance east of the airport. The camera is situated looking southwest towards the city of Miami. From this vantage point you may be able to see planes coming and going towards and off of the Atlantic Ocean.

Miami is known for its beaches, if nothing else. Here is another camera linking to a live feed view of South Beach Miami.
Miami Beach

One of the most famous beaches in the United States is Miami Beach. The warm, clear waters of the Atlantic are perfect for swimming, jet-skiing, people-watching, tanning, and just enjoying the sun with good friends and family.

Here is a webcam giving you a live look Miami Beach. From this camera you can look at the crowds enjoying themselves on the white sands.

The name “Miami” originates from a group of Native American peoples who called themselves the Mayaimis. The tribe lived in the area until the 17th or 18th centuries. Miami is also the only place in the world where one can experience the everglades eco-system.

Apart from its history, alligators, and swampland, Miami is also the home of hundreds of thousands of people. The city itself is something of a melting pot, home to a variety of languages and ethnicities. Here is a webcam overlooking a park near downtown Miami.