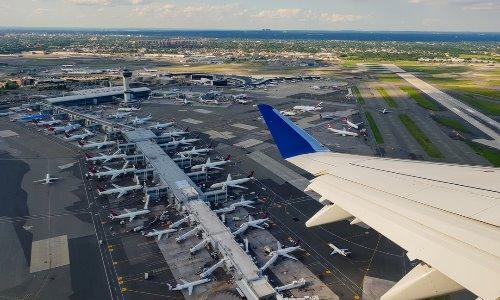 The JFK Airport is a major international airport, and JFK stands for John F. Kennedy, the 35th president of the United States who was assassinated in 1963.

The JFK International airport is located in Queens, New York City. It is known in the United States as the busiest international air passenger gateway. There are direct and/or non-stop flights to locations all over each of the six continents.

If you would like to find out additional information regarding the airport, or look at flights, visit JFK Airport.

The airport’s other name, “Idlewild,” is derived from the Idlewild Golf Course. Prior to the airport’s construction the land whereon it sits was the home of the golf course. About 1,000 acres of the land occupied by the golf course were allowed to be used for the aiport. Despite the somewhat small space a considerable amount of government funds were utilized in the creating of the airport—approximately 60 million, in fact. Construction of the New York International Airport started in 1943.
In 1948 the airport underwent another name change. It was decided by the New York City Council that it should be called the New York International Airport, Anderson Field. Most people still commonly referred to the airport as the Idlewild Airport, however, until 1963 when it was renamed JFK Airport in memory of the late president.

In 1947 the JFK airport and property was leased by the Port Authority, and they have leased it ever since. On July 1st, 1948, the very first airline flight from JFK took place. President Harry S. Truman attended the opening ceremony.

Map of the JFK International Airport

There are eight terminals in the airport and four runways, out of which more than 70 airlines operate. Currently the airport occupies 8.1 square miles, or 21 square kilometers.
It has more than 25 miles, or 40 kilometers, of taxiways. Visit to get a map of the JFK airport terminals.

This video clip will give you a 20 minute tour of the JFK Airport. It takes the viewer through different areas of the airport including check-ins, Airtrain stations, widebodies, and terminal 8.
It also provides a look at various airplanes flying in and out of the airport. If you are trying to track a specific JFK flight visit here.

New York City itself is one of the most famous cities in the United States. Its history goes back several hundred years, and construction of the city is considered to have begun in the early 17th century.
The city was named in 1664 “New York” after the Duke of York by the English. The city is the home of many famous events and attractions, including Broadway, Times Square, Little Italy, The Statue of Liberty, and the World Trade Center.

One of the best ways to stay connected to the airport or even just see more of the surrounding area is to look at online webcams. There are a variety of different cams that give you a unique glimpse into different parts of New York City. Some of the cameras show live feed while others take recent photographs or show you a time-lapse of the last year or six months.

These can help you to become better acquainted with the area, weather, environment, and even traffic in some cases. Here are a few useful webcams you should check out if you are flying through JFK International Airport, if you know someone who is, or if you are just curious.

Here is the New York Harbor webcam. through this camera you can get a live, streaming feed of the Manhattan waters and skyline. This view will let you watch a variety of different boats and cruise ships as they pass within range of the camera. You will also be able to find cruise information and traffic updates on this site.

This is a closer look at the New York City skyline. As downtown New York City is relatively close to the airport this camera gives you a nearby glimpse.
If you want a little glimpse into the very heart of New York City go here. This webcam provides a glimpse at the famous 5th avenue which is only one block from St. Patrick’s Cathedral.

One of New York City’s biggest attractions is its famous statue of liberty. If this is something that interests you go here to watch the live feed of the statue.  The colossal, copper, neoclassical sculpture was designed by Frédéric Auguste Bartholdi and built by Gustave Eiffel. The statue was a gift which the people of France gave to the United States on October 28th, 1886.

Here is a live glimpse of New York City’s Time Square. Times Square is another popular attraction and destination for those visiting New York City. Times Square comes together at the junction of Seventh Avenue and Broadway and it extends several blocks.

The area had become the very center of New York City’s carriage industry by 1872, and was initially named Longacre Square. It has also been called Thieves Lair and it is rich in history and culture.