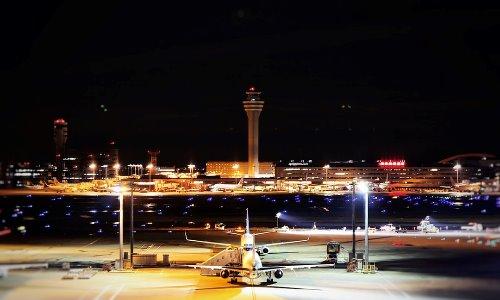 Otherwise known as the Tokyo International Airport, Haneda Airport is one of the most powerful and commonly used airports within the city of Tokyo and the Greater Tokyo Area. It’s located just 14km south of Tokyo Station and this makes travel nice and simple from airport to the city itself.

Haneda Airport is a location that stations the two major domestic airlines for Japan; Japan Airlines and All Nippon Airways. They also keep locations for the likes of Air Do, Solaseed Air and StarFlyer.
Until 2010, this was the major airport within the Tokyo region and it handled everything from domestic flights to charter flights. Narita International Airport handles all international flights.

Haneda Airport, though, handles all long haul flights during night hours thanks to a fourth runway being installed in 2010. This eventually became a day-time service, too, in 2014, with non-stop services to 25 cities in 17 different countries.

In 2014 alone, this airport handled more than 72m passengers making it the fourth busiest airport in the world in the year. Only the Hartsfield-Jackson Atlanta, Beijing Capital and Dubai International airport had a large amount of flowers. The airport, though, is capable of handling as many as 90m passengers in a year following the 2010 expansion.

Visit to learn more about booking flights through the Haneda Airport.

The airport itself has a rich history, having been a major location during the Empire era of Japan, as well as playing a major role during the Second World War as it was typically used for major flight training. It was occupied by US forces for 7 years during 1945-1952.

During this period many changes were made including extending runways to 1,650m and 2,100m respectively. This caused more than 3,000 people to have to leave their homes, however.

It served as a powerful military and civilian airport until it became Japanese territory again in 1952. From there, it became an international airport until 1978. In 1978, after many changes to the city including Narita Airport and the Tokyo Monorail opening, the airport was eventually downgraded to a Domestic era airport once again.

At the time of writing, Haneda Airport has gone through several expansions since the early 2000s and it looks to have more changes in the offing. New arrival corridors are expected to be included as well as more taxiways to help improve congestion and operational quality.

Haneda Airport makes use of three different terminals, with terminals 1 and 2 acting as its main sources of locations and are inter-connected using an underground walkway. Likewise, a free shuttle bus runs between both terminals and the small international terminals on a five-minute basis.

Terminal 2 opened in December 2004 and has an open-air rooftop restaurant as well as a six-story shopping area and a 387-room hotel, the Haneda Excel. Terminal 2 was paid for by using a service charge on tickets for a period of time, becoming the very first Passenger Service Facilities Charge in Japan.

It also has an international terminal, which opened in October 2010 alongside a cargo facility section which opened. This is adjacent the freight terminal, making it easy for both to co-exist with one another.

In the video above – taken November 2015 – you’ll get plenty of help in seeing what this wonderful location holds. You’ll find out key details about the airport and how to navigate it safely. It’s a great way to see the airport before you go and visit it.

If you intend on going there soon, this can be a great way to learn and appreciate the various factors going on around the airport. To view arrivals and departures, just click here.
You can also check out a flight tracker here for Haneda Airport here.

To help you get a better grip of the city and what’s going on in and around it, you can see what’s gong on by making the most of smart webcams based all around the city. When you use webcams, you’ll see places going on as if you were there, letting you see the landscape and if anything is going on in the city that day.

The Tokyo Monorail is one of the major attractions in the city and brings people from all across to come and see the city in a new light. This is a great place to go and use if you want to spend some time in Tokyo, allowing you to fully understand and enjoy the unique nature of the Tokyo monorail webcam and all of its glories.

Another hugely popular part of Tokyo, and a location not too far from the Haneda Airport itself, is the Tokyo Tower. This is a place which is well worth checking out as it gives you plenty of access to a fine view of the city. Not only does it give you a great panoramic view of a wonderful city but it gives you an opportunity to see how busy one of its most popular attractions might be today.

You can check out the Tokyo Tower webcam.