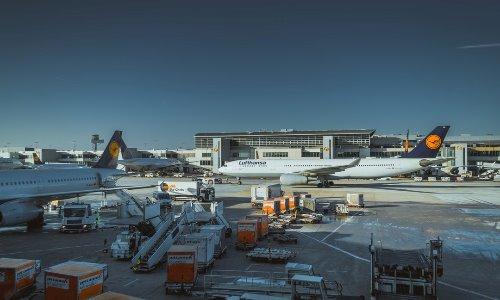 In German the airport is known as Flughafen Frankfurt am Main or Rhein-Main-Flughafen but in English most people refer to it as Frankfurt Airport. Frankfurt is the name of the city the airport is located in, and it also happens to be Germany’s fifth-largest city.

Frankfurt airport is a major international airport and one of the world’s top financial centers. The airport is operated by Fraport.

Fraport is also known as Fraport AG Frankfurt Airport Services Worldwide. It is a German transport company. Not only does it operate Frankfurt Airport in Frankfurt am Main, it is also involved in the operation of multiple other airports which are located at various locations around the globe. Stefan Schulte is the present chief executive officer.

Yearly Fraport makes approximately €2 billion and it gives jobs to around 20,000 individuals, the majority of them are located in Frankfurt. Fraport primarily operates ground handling services in a deregulated context .

In 2015 the airport ranked 17th busiest in the world. As time goes on the airport seems to be increasing in terms of passenger traffic. It is the busiest airport in Germany and in Europe it ranks as the third busiest, but by cargo traffic it ranks busier than any other airport in Europe.

The very first airline was founded in Frankfurt am Main, in 1909. It was called The Deutsche Luftschiffahrts-Aktiengesellschaft, or DELAG.

DELAG was also responsible for building the first airport in Frankfurt. It was called Airship Base at Rebstock and it opened in 1912 in Bockenheim.

This airport was not sufficient to handle all of the traffic passing through so eventually Germany got around to making a new airport.

Frankfurt Airport opened in 1936 as a commercial airport.  At this time it used its Southern end as a base for rigid airships and its Northern part for fixed-wing objects. The airships were dismantled and demolished as part of converting the airport for military use in 1940. After this was done Luftwaffe engineers made the airport more efficient for military aircrafts.

During World War II the US Army took control of the airport and began building a new runway which was meant to be temporary.

At last in 1951 Frankfurt Airport was allowed to grow once more after the restrictions on air travelers were lifted. The following year the airport saw 400,000 travelers, and the year after that, 1953, the number was up another 100,000. Every year Frankfurt Airport proceeded to grow. The year 1955 was important because the Federal Republic of Germany got its air sovereignty back from the Allies and Lufthansa was also able to resume its flights through the airport.

Frankfurt Airport serves as the primary hub for Lufthansa CityLine, Lufthansa Cargo, AeroLogic, and Condor. The airport sits on an area of about 4,942 acres, equal to 7.722 square miles. It is located 12 kilometers from the center of Frankfurt.

If you are interested in seeing a little bit more of the Frankfurt Airport feel free to watch this video.

The video link will take you to a brief Youtube video. The four-minute long clip of the Frankfurt Airport explores the shops, signs, terminals, and other areas within the airport so that you can better familiarize yourself with the experience of being at Frankfurt Airport. The video also includes some additional information.

This is the Franfurt Airport flight tracker, just in case you need to look for a specific flight going through the airport.

Webcams are a great way to get in touch with almost any location around the world. These clever cameras are positioned in strategically areas and stream feed to a link online—often times it is viewable live.

Here are a few webcams of the Frankfurt area—don’t forget about the time difference when viewing live webcams.

You can witness airport traffic from this link. The camera itself is located in a town called Morfelden-Walldorf in an industrial area. It is southeast of the Frankfurt Airport.

To see a breathtaking view of Frankfurt click here. This camera updates every few minutes—it will tell you when it was last updated. The image lets you see downtown as well as waterfront local buildings.
View weather and traffic from Frankfurt using this webcam. From here you can see the Frankfurt skyline as well as local traffic.

This live webcam provides a rotating view of the city of Frankfurt. You can watch traffic travel across the bridge and see the weather in the area. The camera is situated at the Intercontinental Hotel in Mainhattan.

Römerberg
This irregularly shaped square is located in the heart of Frankfurt’s Old Town. This singular square is not only one of the city’s busiest pedestrian zones and most beautiful areas, it is also the home of many other attractions. For a look at Römerberg go here.

This famous sky scraper goes by multiple names, including the Trade Fair Tower, the Main Tower, and, in German, MesseTurm. It is 63 stories high and the second tallest skyscraper in Frankfurt. What makes the building so striking is its particular design, specifically its pyramid-shaped top.

Germany is home to many unique cathedrals, all of which are saturated in history and beautiful architecture. To see the Cathedral of St. Peter click here.  This building, sometimes called the Bremen Cathedral (it is located in Bremen) was dedicated to St. Peter. The church was built around the year 789.