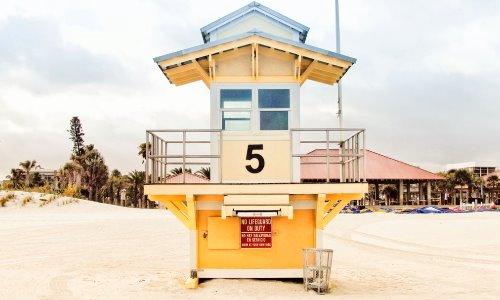 Clearwater Beach consists of 2.5 miles of sandy beaches located on a barrier island. Located near the Tampa, Florida downtown area water activities such as boat tours, jet skiing and para sailing are commonly available to visitors.

The video below was taken from within a vehicle that is traveling throughout the Clearwater Beach area during the busy Spring Break 2013 vacation. In the Gulf water of Florida it is not uncommon to spot dolphins. The area offers a variety of restaurants, local shopping and pirate ship cruises. Touch and go traffic can be viewed in the video as motorist and pedestrians travel throughout Mandalay Ave & Gulfview Blvd.

Clearwater Beach Sky Views Cam
The city of Clearwater is located in the Pinellas County of Florida. A 2010 census study estimated the city population had reached 107,685 residents.  To locals Clearwater is considered to be part of the Tampa Bay Area which is actually located east of the beach. The Gulf of Mexico can be seen to the west of the city of Clearwater.
The camera footage is an aerial view of the Clearwater Beach. The camera is facing North on Gulfview Blvd. Two outside parking garages, a row of building structures and a view of the water is being capture from the live web cam.

On the 400th block of Mandalay Avenue sits the three-diamond hotel, Hilton Clearwater Beach Resort in Clearwater, Florida. There is beachfront beverage and food services available which is the only of its type in the area. The hotel believes in the preservation of the beaches in the area.
The Hilton Clearwater Beach Resort is spreads over ten acres of beach. In an effort to be green the hotel places focus on clean air practices, energy consumption, reduction of waste, and water conservation. The video below features the beach surrounding the hotel. Rows of cabana seating can also be seen on the footage.

Interstate 1-275 which is located in the Clearwater area of Florida is 60.7 miles long.  Interstate 1-275 passes through the Tampa Bay Area, Palmetto Street, Petersburg as well as bridges the Sunshine Skyway and the Howard Frankland Bridge. In 1962, I-275 opened as an extension of 1-75.
In 1984 the Bay Area Outlet Mall was opened at the intersection of U.S Route and Roosevelt Boulevard. 2 years after its opening the Pinellas County officials required that changes be made to the road to accommodate the malls traffic. After the demolish of the mall in 2005 the property was then turned into a strip mall.

The video link below features Southeast views of the two lanes Interstate 275 at Roosevelt Blvd. A row of trees are lined up and down 1-275. The highway overpass can also be seen in the footage.

Pier 60 which is located in Clearwater Beach, Florida has been label as an excellent fishing pier due to its equipment, beaches, easy access to fishing equipment, fine dining, shopping and entertainment. Two hour before sunset several entertainers and vendors provide their services along the Pier, a tradition which began in 1995.

The video below features a sandy white beach with water views. A view finder can be seen at the bottom left of the video.  The pink hotel which is the Hyatt Aqualea Resort can be seen to the far upper right.  Across from the pier is a marina.