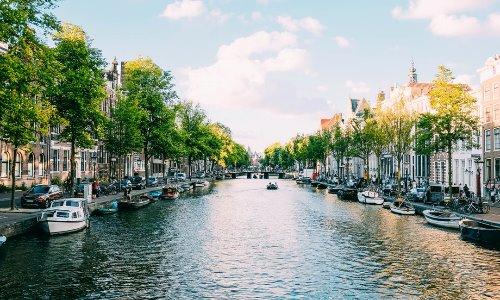 The most populous city in the Kingdom of the Netherlands and the Dutch capital, Amsterdam although not the seat of the Dutch government The Hague, is mandated by the Constitution of the Netherlands. Within its city limits Amsterdam has a total population of 813,562, 1,575,263 in the metropolitan area and 1,112,156 within its urban region. Amsterdam is located west of the country in the Netherlands province of North Holland situated on the North Sea and comprises of much of the northern territory of the Randstad, one of Europe’s larger conurbations consisting of four cities with a total population of over 7 million.

Originally a small fishing village during the 12th century the name Amsterdam was derived from Amsteiredamme suggestive of the origin of the city used as a dam of the River Amstel which runs through the city. Later during the 17th century often referred to as the Dutch Golden Age with the innovative developments in trade Amsterdam was transformed into one of the world’s most important ports. During the 19th and 20th century Amsterdam expanded with building of several neighborhoods and planned suburbs. In recognition the UNESCO World Heritage Site has listed the 17th-century canals of Amsterdam and the Defense Line of Amsterdam among the list of sites offering outstanding cultural or natural importance to the common heritage of humanity.

One of the major financial capitals throughout Europe and the commercial capital of the Netherlands Amsterdam is acknowledged by the Globalization and World Cities study group as an alpha world city. Several major Dutch corporations are headquartered in Amsterdam among seven of the world’s 500 largest companies including, the Dutch multinational banking and financial services corporation the ING Group and the Dutch diversified technology company Royal Phillips. The Economist Intelligence Unit in 2012 ranked Amsterdam as the second most suitable place to live. The famous diarist Anne Frank, and the renown artist Vincent Van Gogh are just some of the well known persons who have lived in Amsterdam.

Dam Square Amsterdam webcamLocated neat the NH Grand Hotel Krasnapolsky, this webcam offers a live video of the center of Dam Square dominated by the Dam Monument to the right.

The Amstel Canal Amsterdam webcam by way of EarthCam is located at the Hotel Nes in the heart of the city and displays an amazing view of the Amstel Canal.

Live webcam located on the street level of the main roads in Amsterdam – the Overtoom. Watch cars and people going by and more. There are three webcams to choose from and images update every few seconds.