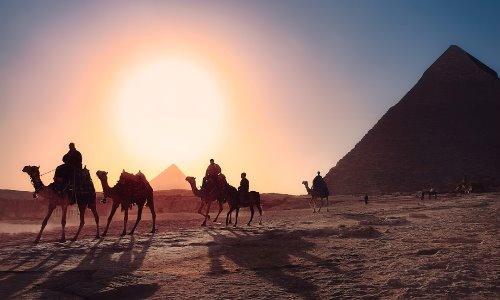 Officially recognized as the Arab Republic of Egypt, Egypt is a transcontinental country extending across the northeastern territory of Africa and the southwest area of Asia, by a wide land bridge connection created by the Sinai Peninsula. Most of Egypt’s territories consisting of over 390,000 square miles lies within North Africa’s Nile Valley, bordered by the the Mediterranean Sea to the north, israel and Gaza to the northeast, the Red Sea to the sour, Sudan and Libya to the west and the Gulf of Aqaba to the east.

▪  Egypt is the largest county within the Middle East and the Arab Nation, and with a population of over 85 million is recognized as the third-largest African country and 15th among the most populous country in the world.

▪  Most of Egypt’s population can be found along the banks of the Nile River within an area of 15,000 square miles comprising of the only known land capable of growing crops. The larger regions however which make up most of Egypt’s territory such as the Sahara Desert are seen as less inhabited.

▪  50% of Egypt’s known population live in urban areas with most residents spread out across the more densely populated regions of Alexandria, Cairo as well as the major cities located within the Nile Delta.

▪  Comparable to any other modern country, Egypt has one of the longest line of historical events, both from its native inhabitants as well as outside influence, beginning during the 10th millennium BCE as one of the first nation states worldwide.

▪  Ancient Egypt widely viewed as a historic cradle of civilization is acknowledged as the birthplace for some of the earliest developments in central government, organized religion, agriculture, writing and urbanization.

▪  Egypt’s iconic monuments including, the Great Sphinx, the Valley of the Kings located outside the Upper (southern) city of Luxor, the ruins of Memphis, the Karnak Temple Complex as well as the ancient city of Thebes are evidence of Egypt’s legacy and even to this day remain the centre of archeological focus and study by archeologists worldwide.

▪  Modern-day Egypt is vastly considered as a regional middle power, having a significant amount of military, cultural and political influence in the Muslim world, the Middle East and even North America and is noted for having one of the largest and most diversified economies within the Middle East accompanied by its tourism, industry, agriculture and services sectors at almost identical levels in production.

▪  One of the most important and significant sectors in Egypt’s economy is tourism. In 2008 Egypt played host to 13 million visitors bringing in a total revenue of over $10 billion. Today Egypt’s tourism sector employs more than 12 percent of Egypt’s total workforce generating more than $9 billion annually.

▪   Egypt is primarily a Sunni Muslim country recognizing the Abrahamic religion of Islam articulated by the Qur’an as its state religion. The number of followers of various religions within Egypt throughout history and even today remains a topic of controversy as an estimated 90 percent of residents are recognized as Muslims, 9 percent seen as native Christians of Egypt and the remaining 1 percent belonging to other Christian religious groups with Egypt’s non-denominational Muslims from about 12 percent of the population in Egypt.

Rooms With A View Egypt Webcam

The Rooms With A View website located at www.roomwithaview.com features a stunning collection of live hotel webcam views taken from some of the finest hotel rooms worldwide. Visitors to their online website can book hotel rooms as well as explore a vast number of live webcam feeds from spectacular locations such as the Great Pyramids of Giza, Paris iconic Eiffel Tower, the legendary Via Veneto in Rome, the impressive Empire State Building in New York among many more.

Some of the more popularly viewed live webcams offered by Rooms With A View includes their Red Sea Cam featuring the Sheraton Soma Bay Resort Beach Bar, Crescent Beach Restaurant, Red Sea, Egypt, the Sheraton Cairo Hotel and Casino located on the west bank of the River Nile as well as the Le Meridien Pyramids Hotel & Spa revealing a stunning first-hand view of the great Pyramids of Giza, both shown in the links posted below.

The Kite Junkies website at kitejunkies.com by by El Sheikh, Egypt’s first and only Kitesurfing Center offering certified IKO training courses in Nabq features a live webcam broadcast overlooking the launching and landing area of the Nabq Lagoon kite beach.

EarthCam Networks Egypt Cam features a breathtaking view from the luxurious Iberotel Hotel surrounded by its ancient history and beauty consisting of miles of natural beaches. Click the link posted below to enjoy an enchanting and relaxing first-hand view of the Iberotel Palace pool and beach location located off the coast of the Sharm El Maya Bay known for its tropical waters and a popular area for scuba divers around the world.

The online active webcam directory World in Cams is renown for providing a clean easy-to-use interface allowing visitors to their website www.worldincams.com to seamlessly browse through a wide variety of cameras located worldwide. Images displayed via the World in Cams database are effectively linked to their selective source pages found on Webcams.travel as well as to the profile of each respective owner.

World in Cams via their Webcams, Africa, Egypt features a live broadcast taken from the Sheraton Luxor Resort located in the quiet and secluded eight acre of luxuriant tropical gardens in the center of Luxor.

Giza Pyramids Webcam in Egypt
This webcam gives a view of the famous Giza Pyramids in Cairo, Egypt. One of the 7 wonders of the world.