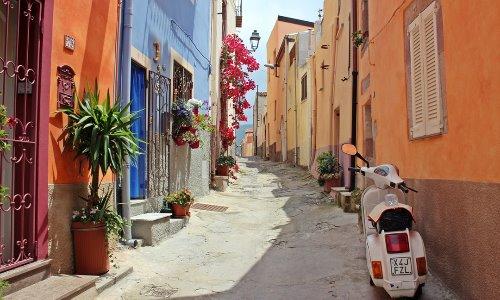 Officially the Italian Republic Italy is a unitary parliamentary constitutional republic in southern Europe sharing its northern border with Switzerland, Austria, Slovenia and France and is more or less established by the Alpine Watershed surrounding the Venetian Plain as well as the Po Valley. The southern region of Italy consists entirely of Mainland Italy and the two largest Mediterranean islands of Sardinia and Sicily.

Additionally included within Italian territory is the islands of Pantelleria, which lies thirty-seven miles east of the Tunisian coast sixty-two miles southwest of the island of Sicily, and Lampedusa, seventy miles from Tunisia, North Africa one hundred and nine miles from Sicily.

Italy’s sovereign states the Vatican City and San Marino are both enclaves within Italy, whereas the Italian commune Campione d’Italia is an Italian exclave within the Swiss canton of Ticino, which lies separated from the rest of Italy by the mountainous regions.  Italy consisting of a total area of 116,347 square miles and known for its mostly temperate climate has with a population of over sixty million and is recognized as the fifth most populous country throughout the European region. Italy has the fourth largest economy within the European Union, third within the euro area and ninth in the world in its Gross Domestic Product.

▪  For centuries and even today Italy’s largest city and capital Rome has been the religious and political hub of Western Civilization, accepted as the primary seat of both Christianity and the Roman Empire.

▪  Archeological diggings throughout Italy has discovered a Neanderthal existence which dates as far back as the Paleolithic period more than 200,000 years ago predating the arrival of modern Humans some 40,000 years ago.

▪  The modest agricultural community of Rome was conventionally established in 753 BC, growing for centuries to become a vast empire stretching from Provincia Britannia to the Persian borders and sweeping over the entire Mediterranean basin merging Roman and Greek cultures into a unique civilization. As a result Western civilization for the next thousand years would be deeply influenced by Roman Imperial legacy, shaping the Modern World until its gradual decline during the late 2nd century AD when the Empire was split into two parts in 395 AD.

▪  Italy after the decline of the Roman Empire was captured by the Ostrogoths under Theoderic the Great who established a kingdom in Italy during the late 5th and 6th centuries then later under the Byzantine Emperor Justinian the Great and then by the Lombards which marked the beginning of the end of political unity in Italy for the 1,300 years that followed. In the late 8th century, the Lombard kingdom was absorbed by Charles I into the Frankish Empire which aided in the formation of central Italy’s Papal States. Prior to the 13th century Italian politics was solely governed by the relations existing between the Holy Roman Emperors and the Papacy which resulted in the majority of Italian city-states aligning themselves with the Guelphs and Ghibellines factions supporting the Pope and Holy Roman Emperor.

▪  With the monarchy abolished by constitutional referendum in June 2, 1946 Italy has since then been a unitary parliamentary republic. The current Italian President and head of state since 2006 is Giorgino Napolitano elected for a seven year mandate in a joint session of the Parliament of Italy.

▪  Italy’s parliamentary government is founded on e proportional voting system governed by a bicameral legislature divided into two houses, the Senate of the Republic which meets in the Palazzo Madama and the Chamber of Deputies meeting in the Palazo Montecitorio.

▪  As the founding member of the European Union and the North Atlantic Treaty Organization (NATO) Italy was admitted into the United Nations on December 14th 1955 and is recognized today as an active and strong supporter of several international organizations including the Central European Initiative, the General Agreement on Tariffs and Trade/World Trade Organization, the Organization for Economic Co-operation and Development and the Council of Europe.

Hosted by the Lookaway website, SkylineWebcams provides an ideal solution for increasing tourist satisfaction and business efficacy. Online viewers to the website are offered a first hand view of some of the most suggested locations worldwide where they get to know many of the most beautiful snowy mountains, breathtaking beaches and natural landscapes.

Below is a link taking you to a Panoramic view of the coast located in-between the town and commune of Gallipoli located in southern Italy and Santa Maria di Leuca featured by Skyline Webcams.

Earth TV is known for providing millions of daily images captured from a network of permanently installed motion-controlled broadcasting webcams used to produce a a number of programs offered to live broadcasters worldwide. Shown in the link posted below, the website features a live stream taken from the earthTV camera in Venice, Italy, showing a breathtaking view above the water and the gondolas (flat-bottomed Venetian rowing boat) on the canal, the famous Palazzi, the Rialto Bridge as well as boat traffic and pigeons.

RomeExplorer as a part of the Fisheyes Group of travel and tourism websites in Italy is renown for providing a wide range of internet solutions to hotels throughout Italy. Through a system of installed live-broadcasting webcams visitors to the RomeExplorer website can experience the natural beauty and landscape of Italy via a number of locations such as seen in the webcam at the Hotel Croce di Malta in Florence posted below.

The recently restored Hotel Metropole Bellagio, situated in the center of the Italian town of Bellagio and the only Hotel with a direct view of Lake Como features a network of live-broadcast webcams offering online viewers a remarkable 360 degree panoramic view of the breathtaking Lake Como as well as views of the San Martino Church located high upon the of the Villa Melzi gardens.

This site has two webcams – one of Riva Del Garda Varone – Upper Gardalake, Italy. Gives a view of Mount Baldo and shows current weather. The other shows a wider view Mount Baldo and Lake Garda.

The Bagno55 webcams are located in Rimini, Italy at a hotel resort on the beach. There are a few webcams to choose from – one with a view of hot tubs, another of an outdoor cafe and another of the beach. Images update every few seconds.

The webcam of Col Raiser provides the magnificent view from the Alpine Hotel Col Raiser. On display are inter alia the mighty Langkofel and below the ski area Ciampinoi with its beautiful slopes and dense forests.

This webcam gives a view of Casarina Holiday Apartments in Gravedona, San Carlo. This little bungalo sits right next to famous Lake Como in Italy… the lake that George Clooney loves to be seen at.

This webcam is located in Riva Del Garda, Italy and shows a park and walkway near the ocean. Also shows current weather conditions.

This webcam shows Torre Vado nel Salento in Italy. See the famous landmark next to the ocean as well as boats coming in and out of their docks. This is a Mobotix M22 webcam.

This webcam is located in Italy and gives a view of Greve in Chianti. See a statue and are where people walk and buildings on the side.

This webcam is located in Augusta in the region of Sicily in Italy. It shows a marina with boats and the current weather conditions.

This webcam is located in Italy in the Riviera Adriatica, Abruzzo, Italy. It is a remote conrol webcam titled Europe Garden. You can pan, tilt and zoom and choose preselected location such as Piscina, Silvi Marina, Parco Marino and more. See the ocean and more.

Here you can see several webcams in Italy as well as current weather conditions. Where is it? Well, it says Meteo, Sismo, Situazione Corrente, Fulmini.

This webcam gives a live view of a beach resort in Termoli, Italy.

This webcam gives a view of Florence, Italy (Firenze) from the top of the Kraft Hotel. See Florence center and Brunelleschis Dome.

This cam lets you see what appears to be a parking lot in Sermide, Italy perhaps located outside of the offices of Sermidiana Magazine.

This webcam is located in Bellaria di Rimini, Italy and has three views from Hotel Paris. Includes two of the swimming pool and one of the hotel lobby.

Live webcam located in Pisa, Italy gives a view of the famous Leaning Tower of Pisa one of the famous landmarks wonders of the world. Image updates every six seconds. Also see a bridge and busy walkway full of tourists.

This webcam is located in Sicily and gives a view of a tennis court or pool next to a beach at Hotel Mediterraneo. Resort is in San Vito Lo Capo, Italy. Image updates every 5 seconds.

This webcam gives a live view of a wine field somewhere in Italy. Watch as grapes are grown throughout the year and are transformed into tasty wine.