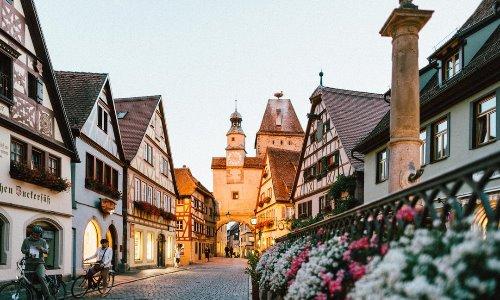 Officially the Federal Republic of Germany, Germany today is recognized as a federal parliamentary republic located within the western-central region of Europe consisting of 16 known constitutional states each retaining limited sovereignty. Germany’s largest city and capital is known as Berlin. Spanning across a total area of over 135,000 square miles Germany is recognized for its mostly temperate seasonal climate.

With a population of about 80 million Germany is the most populous member state within the 28 member states of the European Union as well as one of the primary economic and political powers throughout the European region and a notable pioneer in several cultural, technical and theoretical areas.

▪  Since the classical antiquity both northern Germany and southern Scandinavia has been occupied by a vast number of Germanic tribes. Before AD 100 the region Germania was documented by the Romans. Sometime during the Migration Period also known as the barbarian invasions which occurred from about 376 to 800 AD corresponding with the decline of the Roman Empire, Germanic tribes migrated southwards establishing kingdoms throughout the most of Europe. These German territories at the beginning of the 10th century established a central component of what was later to become the Holy Roman Empire. Northern German regions however formed the center of the Protestant Reformation during the 16th century. Engrossed during the Napoleonic Wars between 1803-1815, the increase of the pan-nationalist political idea, Pan-Germanism within the German Confederation led to the subsequent unification of many of the German states in 1871 forming the German Empire which was dominated by the historic state of Prussia.

▪  Following the German Revolution of 1918 and 1919 and the later military surrender in World War I, the German Empire was succeeded in 1918 by the parliamentary Weimar Republic resulting int he loss of territories in the peace treaty signed on June 28 1919 between Germany and the Allied Powers known as the Treaty of Versailles. In spite of Germany’s success in the fields of science and culture during this period, the country experienced a significant amount of political and economic instability which escalated during the severe worldwide economic depression during the 1930’s.

▪  It was the seizure of power of the Nazi Regime otherwise known as the Third Reich in 1933 which eventually resulted in World War II and the Holocaust. Following the end of World War II in 1945 Germany was divided by the occupation of the Allied Forces, later evolving into two separate states known as East and West Germany. Germany was later reunited in 1990 resulting in the teardown of the Berlin Wall

▪  Germany today by nominal Gross Domestic Product (GDP) has the fourth-largest economy and the fifth-largest by purchasing power parity (PPP). Recognized as a global pioneer in a number of technological and industrial sectors, Germany is the world’s third-largest importer and exporter of goods and services.

▪  Germany as a developed country is renown for maintaining an exceptionally high standard of living, attributing to a comprehensive social security system which included the oldest health care system known worldwide.

▪  Renown for its political history and affluent culture Germany has been home to several influential inventors, musicians, artists, philosophers and scientists.

▪  One of the founding members of the European Community in 1957 later known to become the European Union in 1993. Germany is part of the Schengen Area, and since 1999 has been a member of the eurozone. Acknowledged as a world power Germany is a also member of the Council of Europe, the G8, the OECD, NATO and the United Nations.

The Webcam Galore website offers online viewers a via a live-stream webcam a first-hand view of the early 14th century City Hall of Aachen and the square located in front of the market within the heart of Munich, Germany.

The online website of feratel media technologies AG is widely recognized as one of the leading providers of tourism information systems. Acknowledged as the originator of the panoramic camera, the company with over 400 camera locations offers viewers with a vast amount of weather data, images and live-video broadcasts to local television stations taken from a number of locations throughout Europe.

The link posted below taken from their website shows a live broadcast taken from one of their webcams located within the largest city of the German state of Bavaria known as Munich.

Recognized worldwide as the predominant shopping centers for local residents and visitors of Munich, the LUDWIG BECK contains seven floors dedicated to the lifestyle of fashion and beauty offering the shopper with a new discovery with each visit.

Visitors to their website can view live images taken from the central square of Marienplatz in the heart of Munich, Germany showing the prominent tourist attraction the Rathaus-Glockenspiel as well as the Aachen City Hall.

Opened on September 15, 2004, the Edelweiss Lodge and Resort located in Garmish, Germany offers visitors a chance to unwind in one of their spacious guest rooms decorated with custom made upholstery, rustic furniture accompanied with a spectacular view of the Alpine Mountains. Visitors to weather and webcam section of their online website can view from a number webcams located at the resort live panoramic views overlooking the heights peak of the Wetterstein Mountains in Germany known as the Zugspitze, the Alpspix AM Osterfelderkopf as well as the Panoramberg Wank.

Oberkirch Webcam
This webcam overlooks Oberkirch, Germany and appears to show a small castle and the town below from a view on top of a hill. Image updates every 15 minutes.

Krov Germany Webcam
This webcam is located Krov, Germany and appears to show outside of a home or apartment on the streets of a small town or neighborhood.

Moselle Valley Webcam
This site has two webcams in Germany – one titled Mosel bei Bernkastel-Kues which shows a river and bridge and beautiful valley. Another shows the streets and shops at Bernkastel Kues.

Frankfurt Germany Weather Cam
This camera gives current weather conditions in Frankfurt, Germany as well as a webcam pointing at a town square area in Frankfurt.

Bonn Germany Webcam
This webcam gives a view of a bridge and river Rhein in Bonn, Germany. is an AXIS LIVE View 211 Network Camera.

FINO Offshore Windmill Farm Webcams
This is a pretty cool set of webcams that show the FINO offshore windmills somewhere in Germany. Called Forschungsplattformen in Ord. There are 4 different webcams. Get a close up of the windmills, helicopter pad and more.

Kuhlungsborn Germany Webcam
Live webcam gives a view of Kuhlungsborn, Germany and weather conditions near the Baltic Sea. Haus Bartelmann is in the view which I believe is a hotel or bed and breakfast.

Random Germany Webcam
Here is a random webcam located somewhere in Germany. I have no idea where but gives a view of what looks like an apartment or motel and a street right next to it.