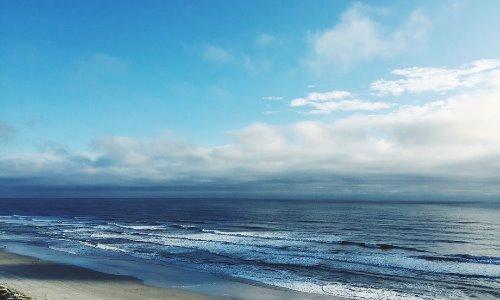 Daytona Beach located in Florida is known as having beaches where in certain locations one is allowed to drive on the beach. The hard pack sand in those areas allows enough traction for vehicles to function on the sand in those designated areas.

The footage shown in the video below is of one person’s SUV ride through Daytona Beach in October of 2010 during Florida’s Wings and Waves air show event.  During the show the Air Force Thunderbirds and the Navy’s Blue Angels fly above the skies for spectators. However the footage did not capture the actual event. No announcements have been made in regards to the status of this year’s event.

The web camera shown in the link below is from a stationary camera and provides views of the oceanfront, the beach and an array of buildings. The area of the beach which is seen on the video is one of the designated areas in which parking is allowed.

The beach which is located within the Volusia County is known as having over sixteen National Attractions such as Turkey Run car show, Bike week, Spring Break, Ocean walk Shoppes and a variety of NASCAR sponsored events. A historic landmark which also draws an audience is the Abbey which is also known as the Rhodes House or the Thompson General Store.

The Atlantic Ocean Palm lounge area of the Inn is being shown in the webcam footage. The family owned and operated Inn overlooks the ocean and has been opened for over ten years. In addition to the sun deck that is shown in the link below the Inn which is located on the Daytona Beach offers oceanfront rooms and a swimming pool.

The Inn is welcoming to families with children. The Main Street Pier which is located nearby provides resources such as fishing, rides and games. There is also an arrangement of events and festivals scheduled each year to entertain visitors such as The Museum of Arts & Sciences and Culture and Culinary inspired festivals.

The Sunglow Pier located in Daytona Beach is home to the Sunglow Fishing Pier & the Crabby Joe’s Deck & Grill. The restaurant which includes a bar and dinning that provides a view of the ocean sits halfway down the pier. People whom have gone fishing at The Sunglow Fishing Pier have reported as catching an assortment of fish such as a variety of Sharks, Trout and Whiting’s.
After the city of Daytona was incorporated on the 22nd of April in 1960 a building was started and the addition of retirement communities, miniature golf course and resorts began to increase.

State Route 40 and Interstate 95 is located in the state of Florida is featured in the link below. The camera is pointed at traffic that is traveling Northbound. In the United States Interstate 95 is the main interstate highway located on the east coast. State Route 40 runs through the central area of Florida.
Florida is bordered by the Gulf of Mexico, Georgia and Alabama. It sits adjacent to the Atlantic Ocean. Tallahassee is the state’s capital and climates ranges from tropical to sub-tropical atmospheres depending on what area you are in within the state.