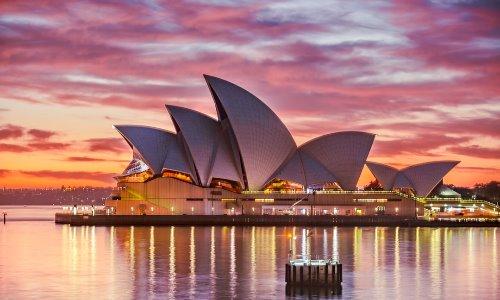 Colloquially referred to as Oz and Officially recognized as the Commonwealth of Australia, the continent Australia is comprised of both the Australian mainland and the island known as Tasmania as well as several other smaller islands. By far the sixth-largest country in total area Australia neighbors to the north the regions East Timor, Papua New Guinea and Indonesia, to the north-east Vanuatu and the Solomon Islands and to the south-east New Zealand.

Australia’s landmass consists of over 2,941,000 square miles on the Indo-Australian Plate and is surrounded by both the Pacific and Indian oceans. Separated from Asia by the Timor and Arafura seas Australia with the Coral Sea located off the coast of Queensland and the Tasman Sea bordering New Zealand is also the smallest continent and often referred to as the world’s largest island.

In spite of the fact that most of the continent is semi-arid or desert, Australia is known for its richly diverse habitats ranging from its tropical rainforests to its alpine heaths and as such is acknowledged as a harboring the majority of the Earth’s species and thus considered to enjoy a level of extreme biodiversity.

Australia’s North Bondi Beach features a live webcam located on the balcony of the North Bondi RSL club overlooking the southern end of the world renown Bondi Beach. Click on the link below to enjoy a firsthand view of the Bondi beach to check out the weather and surf.

The Great Barrier Reef in Australia features a number of webcams including one located underwater capturing Australia’s marine life by a reef. The Web cams shown in the link provided below were set up by the Australian Institute of Marine Science and features live videos from the Hardy Reef, AIMS Wharf, Bowling Green Bay, Davis Reef, Lizard Island and the Agincourt Reef.

Here you can view several different webcams from the Port of Melbourne, Australia. Four cams located at the shipping management center show ships in the port and views of Melbourne. You can also see cams from Point Lonsdale Lighthouse.

This webcam gives a live view of Bondi Beach in Australia. Watch people laying out in the sun or riding and walking on the sidewalk. Excellent views of this popular beach in Sydney, Australia.

This webcam is located in Elwood, Victoria, Australia and gives a live view of the ocean, boats, marina and more courtesy of St Kilda Boat Sales. Excellent quality with streaming video.

Beautiful view of Mount Beauty in Australia from the Bogong Moth (sounds like a Godzilla villain) motel.

This webcam gives a live view of Goolwa Wharf in Goolwa, Australia. See the Murray River flowing into the ocean, a park and a railroad track. Keep an eye on it and you may spot a train passing through. This is a Mobotix M12 webcam.

Gives a live view of a street and intersection in Port Douglas, Queensland Australia. See palm trees, foliage, traffic and pedestrians. You might even spot a bird or two. Road on webcam leads to Four Mile Beach. You can also view another webcam that shows inside Zinc Restaurant.

This is an amazing webcam that gives a view of a rain forest in Cairns, Australia. Watch cableway cars coming and going from Skyrail. Also catch a glimpse of Barron Falls. Webcam has streaming video.

Live webcam gives a view of the skyline in Sydney, Australia. Camera updates every 10 minutes. Also be sure to watch time lapse videos made by the webcam.