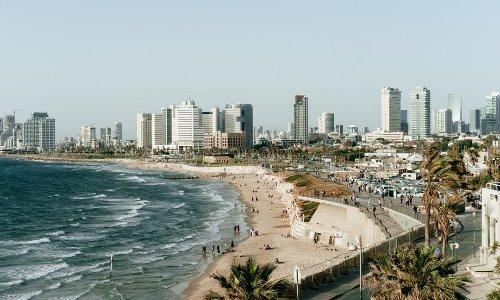 Israel, officially recognized as the State of Israel is a Middle Eastern country located along the south-eastern shore of the Mediterranean Sea in the territory of Western Asia.

The State of Israel today shares land borders with the Lebanese republic in the Northern region, the Syrian Arab Republic in the northeast, the Hashemite Kingdom of Jordan and the State of Palestine on its eastern border consisting of the West Bank and Gaza Strip in the southwest, as well as the Gulf of Aqaba and Egypt at the southern border.

The United Nations General Assembly on November 29, 1947 put forward by accepting and effecting of the United nations Partition Plan for Palestine. Notably on May 14, 1948 David Ben-Gurion, president of the Jewish Agency for Palestine, and Executive Head of the World Zionist Organization proclaimed the establishment of a Jewish state in the Land of Israel later to be known as the State of Israel which was in effect made independent as a result of the termination of the legal commission governing the administrating of territories within the Mandate for Palestine on May 15, 1948. The following day armies from bordering Arab countries occupied Palestine later conflicting with Israeli forces.

Since then Israel has been involved in a number of wars with its neighboring Arab states, later occupying the West Bank sometime in-between 1967 and 1982, and later sections of South Lebanon around 1982 and 2000, the Golan Heights as well as the Gaza Strip. Today Israel has taken possession of these regions as well as Eastern Jerusalem by the signing a peace agreement with Jordan and Egypt, however the border with the West Bank shared with Palestine even today remains a source of conflict resulting in numerous attacks on both sides by Palestinian and Israeli forces.

▪  The State of Israel today categorizes itself as a Jewish and Democratic State and subsequently the only homeland for Jewish people in the world.

▪  While Tel Aviv which is considered to be Israel’s financial centre, Jerusalem located on the plateau in the Judean Mountains and one of the oldest cities in the world today and the regions most populous city and appointed capital internationally is not recognized as a region of the State of Israel.

▪  The population of Israel according to the Israel Central Bureau of Statistics in 2014 was estimated to be at over 8 million people, 6,11,000 or at least seventy-five percent of which are of Jewish descent, 1,686,000 designated as Arabs and settled Muslims and the remaining minorities including Sub-Saharan Africans, Samaritans, Black Hebrew Israelites, and Maronites. Remarkably Israel’s Coastal Plain on the shores of the Mediterranean Sea is home to more than half the nation’s total population.

▪  Israel is today recognized as having the highest standard of living and human development across the Middle eastern region and the third highest in Asis as well as a high level of life expectancy globally when comparable to a vast number of other countries.

▪  The belief in the “Land of Israel” or Eretz Yisrael, the land promised by God to the three Patriarchs of Jews around the early second millennium BCE according to Hebrew Instructional Teaching has been a sacred notion to the Jewish people for centuries and even today.

▪  It has been documented according to a number of extra-biblical sources that sometime during the 11th century BCE the first Kingdom of Israel was founded subsequently ruling for over four hundred years and although the southern Kingdom of Judah as well as a large number of Phoenician city-states became subject to Assyrian rule, the Kingdom of Israel in addition to the Philistine city-states fell in 722 BCE.

▪  Israel’s sovereign territory, not including its territories occupied during the 1967 Arab-Israeli War consists of roughly over 20,000 square kilometers or just over 8,000 square miles, two percent of which is made up of water. Nonetheless Israel is such a narrow state that the sea zone prescribed by the United nations Convention on the law of the Sea in the Mediterranean Sea is measured at twice the area of the entire country.

▪  In spite of its seemingly small size Israel is known for a variety of geographical characteristics, such as the the southern inland fertile plain of the Jezreel Valley, the mountainous range of Galilee, the Negev desert region, Mount Carmel and the Golan Heights in the north.

Recognized as the most important site to the Jewish people, the Kotel often referred to as the Western Wall is the last remnant of the ancient Jewish Temple. Linking generations of Jews from across the world, the Western Wall is renown for a place to turn in prayer as Jews can often be seen writing notes to God and placing them in-between the prehistoric stones used to build the wall.

The Live Kotel Cam website features a live video stream taken form a number of locations offering viewers a first hand view of the Kotel Western Wall including, The Prayer Plaza, The Wilson’s Arch and the Western Wall Plaza shown in the links posted below.

Israel’s largest metropolitan area and second most populous city Tel Aviv is featured in this Live Traffic Webcam of Central-West Israel. Viewers by visiting the link posted below are able to get a first hand view of the live weather and traffic conditions in the Tel Aviv city centre Gush Dan, Israel.