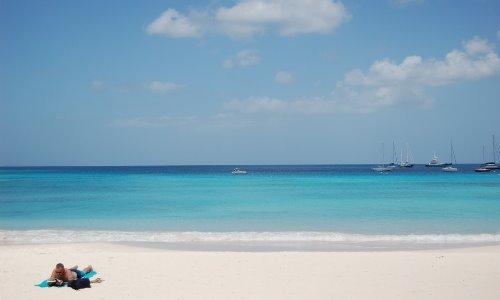 A sovereign country in the Lesser Antilles the island of Barbados is 21 miles in length and 14 miles in width covering a total area of 167 square miles. Located in the western region of the North Atlantic at about 62 miles east of the Caribbean Sea the island is positioned outside of the principal Atlantic Hurricane Alley.

During the late 15th century the island of Barbados was visited by Spanish navigators and claimed for the Monarchy of Spain first appearing on a Spanish map in the year 1511. Barbados before the Spanish navigators was visited by the Portuguese in 1536 who left the island unclaimed, leaving only an introduction of wild hogs for an adequate supply of meat for further visits and the only sign that they had ever been on the island. Visited by the Olive Blossom, the first English ship in 1624, the island of Barbados was claimed by the English in the name of King James I and was colonized by the first English settlers in 1627 later becoming an English and subsequently a British colony.

Barbados in 1966 was recognized as an independent state and a member of the Commonwealth of Nations with Queen Elizabeth II as its reigning constitutional monarch, and having a royal line of succession with other realms. The island of Barbados although being considered as an Atlantic island is accepted as a member of the Caribbean and classified as one of the foremost leading tourist destinations in the world. Next to Canada Barbados in 2011 according to the Corruption Perception Index of Transparency International was ranked second in the Americas and 16th on the global scale.

Facts about the Island of Barbados

Located in the parish of St. Peter, Barbados, one of the most touristed beaches on the west coast of the island of Barbados is the Mullins Beach. The webcam provided by the Royal Westmoreland Barbados and Treasure Beach Hotel offers online viewers a breathtaking view of what many have considered to be the perfect holiday vacation spot in the Caribbean.

A very popular hangout for snorkelers, the beach is located in a cove where the waters are clear and calm offering a superb location for diving and watching wildlife.

The Dive Shop Webcam in Barbados

This webcam is located in St. Michael, Barbados and gives a view from the Dive Shop Ltd. Here you may see people and friends and family boarding boats and current weather conditions.

This site has two different webcams from Royal Westmoreland resort in Barbados. One gives a vidw of Mullin Beach, another of the golf course. You can change views and also see their beach bar.