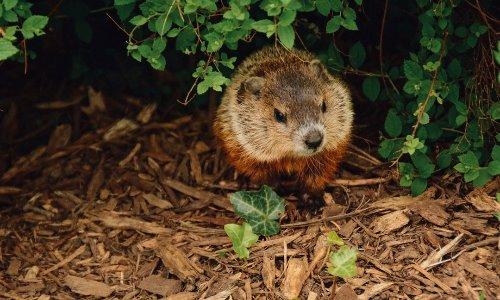 One of 14 species of marmots and the bane of just about every gardner, the groundhog commonly referred to as the woodchuck or whistle-pig is a lowland creature with a feast-or-famine lifestyle known for gorging themselves decimating many a plot voraciously feeding during the summer months to stock pile large reserves of fat for the winter months. The groundhog after the first winter will return to their underground burrow and hibernate until spring using their stored fat to sustain themselves. The groundhog can be widely found in the northern regions of the United States, Canada, Alaska and even extending as far as southeast Georgia.

The largest member of the family of Sciuridae, (squirrel) in its geographical range, the average groundhog will measure between 16 to 26 inches in length, 6 inches in height and often weighing in between 4 to 9 pounds. However in many geographical regions consisting of an abundant supply of alfalfa (a perennial flowering plant in the pea family used by the groundhog for food) and fewer natural predators, the groundhog has been known to grow as large as up to 30 inches and can weigh as much as 31 pounds.

In spite of their heavy set appearance and given their nature to frequent areas where woodlands will meet an open space such as in fields, streams and roads, groundhogs can climb trees and are also known as excellent swimmers. The groundhog’s short yet robust limbs and thick curved claws are best used for burrowing and can move as much as up to 5,500 pounds of soil when digging. Remarkably the groundhog’s spine unlike other sciurids has a curve shape much like that of a mole and its tail is also much shorter at about 1/4 of its full body length. Adaptive to their temperate habitat the groundhog is covered with two layers of fur.

The first is a dense undercoat grey in color while the second which is seen as a longer coat consisting of long guard hairs giving the groundhog its unique frost like appearance.

In an effort to control the groundhog’s rapidly increasing population they are often subject to being hunted as a sport. However its tendency to reproduce in large numbers has allowed the groundhog to mitigate the depopulating effects.

Facts about the Groundhog

▪  Groundhogs are mostly herbivores and will mainly eat wild grass, berries and other agricultural crops. And though they may eat grasshoppers, grubs, snails and other small insects they are not considered omnivorous as other sciuridae. Much like the squirrel, the groundhog will sit in an upright position when eating nuts however unlike the squirrel they do not burry them for future use.

▪  The groundhog uses its burrow for sleeping, raising their young and for hibernating. Though several groundhogs will occupy a single burrow, they are mostly solitary marmots. With up to 46 feet of tunnels buried as deep as 5 feet underground, the burrow of a groundhog is quite large and can have anywhere between two to five entrances allowing for a means of escape from a predator. It is for this reason that the groundhog is considered as such a grave threat to gardeners, and even more so to agricultural and residential development given their ability to damage farming equipment and even compromising building foundations.

▪  As one of the few species known for its true hibernation, the groundhog will build a separate “winter burrow” in a wooded or brush area just for this purpose. The burrow which is dug below the frost line provides a steady temperature much above the freezing temperatures during the winter. The groundhog will generally hibernate from the months of October to March or April, however when in more temperate regions they will usually hibernate for as less as three months. The groundhog must be at its maximum weight to survive the winter hence the storage of a large amount of body fat.

▪  Groundhogs are known for breeding during their second year, though few have been reported breeding just within the first year. The groundhog’s breeding season occurs after hibernation and will extend from early March to the mid and latter part of April. After mating groundhogs will remain paired throughout the gestation period which can last up to 32 days.

▪  In the state of Ohio, United States, the Ufferman Site which is said to be the location of a village of the Cole culture, who inhabited the area during the Woodland period was revealed as a result of groundhogs burrowing underground.

▪  In tribute to the groundhog, Groundhog Day is celebrated yearly on February 2nd in the United States and Canada and involve early morning festivities to watch the groundhog emerge from its burrow to predict the weather.

On February 2 at Gobbler’s Knob the Prognosticator of Prognosticators, Punxsutawney Phill again appeared to make his annual prediction.

Home – Groundhog Day
The Official Website of Punxsutawney Phil the Groundhog. This is the place to watch the official Groundhog Day ceremonies in streaming video. Also view archived videos from the past.

Welcome to Punxsutawney Weather Cam
This is a live weather cam of Punxsutawney, PA. Check out the weather to see if the groundhog will see his shadow or not and predict whether there will be 6 more weeks of winter. See parts of the town of Punxsutawney where the movie Groundhog Day was filmed!

Live Video and Control
Groundhog Day webcam – stage right. Remote control gives you a view of the crowd as they will celebrate to see if Punxatawney Phil sees his shadow.

Live Video and Control
Groundhog Day webcam with remote control, zoom, pan and tilt. This one lets you zoom around on the crowd that will be watching the Groundhog day festivities.