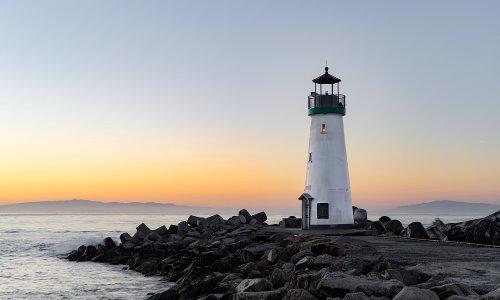 Most lighthouses are seen as a building or tower structurally designed to emit light rays from a network of lamps and lenses to be used as a navigational aid for mariner pilots out at sea or sailing on inland waterways.

Lighthouses are typically used to indicate safe entries to harbors, hazardous shoals, reefs, dangerous coastlines, as well as a guide in aerial navigation. The Lighthouse;  once widely used by marine pilots has since then experienced a decline in the number of operational lighthouses primarily due to the vast expense of maintaining the structures coupled with the subsequent availability of more modern navigational and electrical systems.

▪  Before the evolution of well defined ports, fires burnt on hilltops were used as a means to aid in the navigation of mariners by improving visibility. Due to this helpful and acceptable practice;  placing a fire on a platform quickly led to the origination of the lighthouse.

▪  Unscathed by history; the Tower of Hercules at A Coruna as well as the ruins of the Roman lighthouse located in Dover Castle England bear a true perception into the construction used in ancient lighthouses.

▪  The turn of the 18th century marked the modern era of lighthouses, as construction of lighthouses thrived with the flourishing levels of transatlantic commerce. With the breakthrough in structural engineering and state-of-the-art lighting equipment, larger and more industrial lighthouses were built including those unsheltered from the sea. This resulted in the function of the lighthouse making a shift towards providing a visible warning sign for marine pilots against shipping peril as commonly seen with rocks and reefs.

▪  Sailing through the English Channel a hazardous shipwreck experience for marine pilots due to the Eddystone Rocks resulted in the first lighthouse built by Henry Winstanley which comprised of an octagon wooden structure, fastened by 12 iron upright bars fixed in the rock fully exposed to the open sea. Between 1756 to 1759 the lighthouse was rebuilt by civil engineer John Smeaton thus taking a significant step forward for the designs of future lighthouses, enduring in its use until 1877.

▪  Burning coal or wood pyres for some time had been the source of illumination for lighthouses until the invention of the Argand lamp by the Swiss scientist Aime Argand in 1782 later revolutionizing the illumination of the traditional lighthouse with a now steady and smokeless flame. The Argand lamp was seen as using olive oil, vegetable oil, whale oil and coloza as a means of fuel supplied by gravity feed from a container installed overhead the burner. The very first Argand lamp was constructed 1784 by Matthew Boulton, in collaboration with Aime Argand later becoming the standardized lamp used for lighthouses for more than a century.

▪  Early lighthouse structures relied on ground glass occasionally tinted about the wick. Later lighthouses however adopted the use of a thorium dioxide mantle hung over the flame producing a steady bright light.

▪  The first lighthouse tower to successfully use en electric light was the Victorian South Foreland Lighthouse on the South Foreland in St. Margaret’s Bay, Dover, Kent, England in 1875. Powered by a steam-driven magneto these carbon arc lamps designed by prominent lighthouse engineer John Richardson Wigham were the first to implement a principle of using gas illumination for lighthouses. An improved version of his gas “crocus” burner was used at the Bailey Lighthouse on the southeastern part of Howth head in Dublin, Ireland and was seen as thirteen times brighter than any luminous object ever developed.

▪  In 1901 the British monetary theorist and inventor Arthur Kitson developed the vaporized oil burner which was subsequently refined at the Corporation of Trinity House of Deptford Strond, England by David Hood. The vaporized oil burner used fuel vaporized at high pressure, burning to heat the mantle and producing more than six times the brightness of conventional oil based lights. Throughout the 1900s to the 1960 the vaporized oil burner was seen as the predominant form of light source used in lighthouses at a time when electric lighting became dominant.

Situated at the tip of the Hook Peninsula in County Wexford, Ireland and undoubtably one of the oldest intact and operational lighthouses today, the Hook Lighthouse has been awarded by the editorial firm Lonely Planet as the no.1 Flashiest Lighthouse in the World. The Hook Lighthouse & Heritage Centre in addition to offering guided tours of the lighthouse 800 year structure has an online website featuring two live webcams, one looking in an Eastern direction towards the Saltee Islands and the other looking West across the Waterford Harbor estuary to Dunmore East.

Founded in 2009 by Canadian Ralf Pickart, and a division of QVISTO Inc, Nova Scotia Webcams is renown for their webcam installations offering 24/7 HD quality images used for traffic monitoring, tourism marketing, as well as a number of ongoing construction projects.

Via their online website visitors are able to get have a first-hand view of Nova Scotia’s renown landmark the Peggys Cove Lighthouse shown in the link posted below.

Via their online website located at www.nps.gov/index.htm the National Park Service features a live stream of the Cape Hatteras Lighthouse with views taken from the Museum to the Sea,