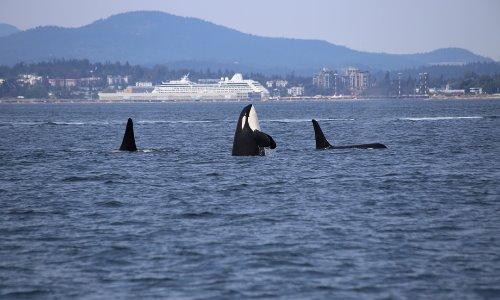 Often referred to as the orca whale or blackfish, the killer whale as a member of the dolphin family is widely known as an apex or super predator at the top of their respective food chain having teeth rather than traditional baleen plates found in most whales allowing them to be fondly referred to as wolves of the sea.

Killer whales are generally found across the vast oceanic regions from the bitterly cold Antarctic to Arctic zones to more tropical seas. In spite of the fact that some independent populations of species have been found to be highly selective in their choice of food, the killer whale conversely has ben observed to display a more tactical diversity in its diet. While many of the species will traditionally feed on existing fish, others will tend to stalk a variety of oceanic mammals including seals, dolphins, walruses and on occasion larger whales.

When hunting, the killer whale has been known to group themselves into phalanxes swimming quickly towards floes of ice containing their prey. During this approach the whales will change their direction before impacting the ice creating a wave to known the prey off the ice and into the water.

Viewed as an exceptionally social member for he dolphin family, the populations of killer whales found today are mainly comprised of family groups based on a close kinship with the mother or other female linage representing one of the most stable genus of any species of animals. When hunting, the killer whale exercises an advanced and highly innovative approach when stalking its prey often displaying selective vocal behaviors indigenous to individual family groups, passed on from one generation to the other in what many marring biologists refer to as culture manifestations.

Although there have been reported incidents of killer whales in captivity injuring and killing their trainers at a number of marine theme parks, the killer whale is traditionally not considered as a direct threat to the existence humans. Scientific studies conducted at a number of universities worldwide have reveled the killer whale as having a strong and almost identical characteristic according to traditionally domestic customs earning them the reputation for being ruthless killers to emotional spirited animals.

User controlled camera 5 in the link below is located on the Race Rocks Jetty west of Victoria in the Strait of Juan de Fuca. Their live webcam allows viewers a live broadcast of one of the main routes travelled by a vast number of killer whales as they enter and leave the Pacific Ocean.

Located at SeaWorld in San Diego, California, the San Diego Orca Webcam operates daily between the hours of 9a.m through to 5:30 pm Pacific Standard Time. Viewers can watch a live stream of the killer whales via this Shamu Cam or replayed footage of the day’s activities at midnight.
View San Diego Orca web cam.