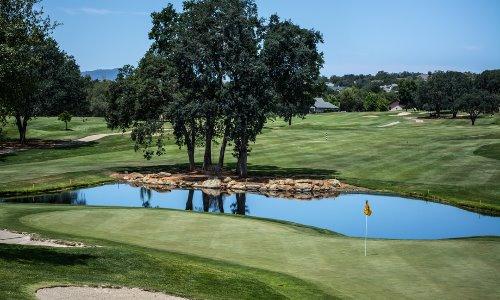 The game of golf is a competition sport played with precision by using a club to hit balls into a series of holes with as few strokes as possible. One of few ball games played on a non standardized playing area golf is played on course arranged with nine or eighteen holes each of which must contain a tee box set off by two markers showing the bounds from which each player must begin, and a putting green consisting of the actual hole.

In-between the tee box and the putting green are various types of standardized terrain as hazards, rough and fairway. For each golf course, every hole is unique in its design and layout. Moreover the grass levels on a golf course are also varied for increased difficulty as well as allow for putting.

Golf is played among players by competing for the lowest number of strokes known as stroke play or for the most individual holes won, halved or lost, known as match play. Though variations of match play such as “skins” have been frequently played during televised events, at all levels of play the stroke game is the most played.

▪  Although modern golf may have began in 15th century Scotland, the ancient origin of the game is still the subject of much debate. However there are some historians who will attest that the game traces back to the Roman game paganica where players would use a stick to hit a ball stuffed with feathers. It is theorized that pagancia which was widely played throughout Europe during the first century BC later evolved into the game of golf played today. Many have cited the game of chuiwan which dates back to as far as between the eighth and fourteenth century ancient China as the precursor to modern golf. Other historically played games which may have developed into the game of modern golf include, the game of cambucha played in England, the Persian game of chaugan, and kolven which was played annually in Loenen, Netherlands.

▪  The first documented report of the game played was in 1457 Scotland when the game was banned by James II as an unwanted distraction to learning archery. In 1502 the ban on the game was lifted by James IV who had gotten himself a set of golf clubs between 1503 to 1504. One of the world’s oldest golf courses, the Old Course at St Andrews, a public course in St Andrews, Fife, Scotland is considered a site of expedition and the “home of golf” to many golfers.

▪  The first record of a standardized 18 hole golf course was in 1764 at St Andrews when members modified the existing holes from 22 to 18 holes.

▪  The Old Golf Course in Musselburgh Links, East Lothian, Scotland is recognized by Guinness World Records as the world’s oldest golf course. Musselburgh Links is today publicly owned and managed by the East Lothian council area of Scotland and has 9 holes and is a par 34. Evidence suggests that the game of golf was played there as early as 1672 and it is believed that in 1567 Mary, Queen of Scots may have even played there. Musselburgh is one of three golf courses known for staging the oldest of four major championships in golf, the British Open during the 1870s and the 1880s.

▪  In 1888 golf was first demonstrated in the United States by two Scotsmen from Dunfermline, John Reid and Robert Lockhart who began by setting up a hole in an orchard. This led to John Reid that year founding the first golf club in the United States, the St. Andrews Golf Club in Yonkers, New York.

▪  In 1774 the oldest remaining rules of the game were collated for the Company of Gentlemen Golfer, subsequently renamed The Honorable Company of Edinburgh Golfers, which played at Leith Links, Edinburgh, Scotland. Today the rules of the game are standardized produced and interpreted jointly by The Royal and Ancient Golf Club of St Andrews and the United States national association of golf courses, clubs and facilities, the United States Golf Association (USGA). On the back cover of the official golf rule book is written … “Play the ball as it lies, play the course as you find it, and if you cannot do either, do what is fair”.

▪  Golf clubs are traditionally characterized into three basic types, Woods, Irons and Putters, with a fourth class known as hybrids which evolved from a combination of Woods and Irons. Hybrids have generally been used by golfers as a replacement for low-lofted irons for offering a similar distance yet allowing a higher angle of launch while more forgiving.

▪  Each golfer during a stipulated round is allowed a maximum of fourteen clubs in their bag. Although each club must be constructed in accordance with and “conforming” to the set regulations as stated within the rulebook; the choice of the clubs is left to the player’s discretion. Golfers who violate the rules are generally disqualified.

▪  Although they are usually seen as spherical white balls, golf balls come in various colors and contain minutely pock-marked dimples which are used to reduce aerodynamic drag thus allowing the ball to travel farther.

▪  Golfers are known for wearing shoes (golf shoes) with plastic or metal spikes which are used to increase traction allowing the golfer to drive longer and gain more accurate shots.

▪  Golf’s major championships include four annual men’s tournaments; The Masters, the U.S. Open, The Open Championship and the PGA Championship.

These golf course webcams allow you to visit your favorite golf courses around the world virtually. Also useful to check weather conditions or see how busy a golf course is before you hit the greens.

Asolo Golf Club Webcam
This golf course cam is located at the Asolo Golf Club in Cavaso del Tomba Italy. Gives you a nice view of the green and fairway as well as patio of the clubhouse. Includes current time and temperature.

Pro Mini Golf Webcam
This is an excellent webcam located at a Pro Mini Golf Course in Myrtle Beach, South Carolina, home to the PGA of miniature golf and Hawaiian Rumble and Hawaiian Village courses. This is a Live view – AXIS 211W Network Camera.

Pebble Beach Golf Course Cams
This site has three live golf webcams from Pebble Beach Resorts in California. Watch from the 18th green, first tee or see a view from the lodge.

Golf Gastein Webcam
Watch people playing golf at Gastein Golf Course near Salzburg, Austria. You can also get a nice view of the mountains in the background.