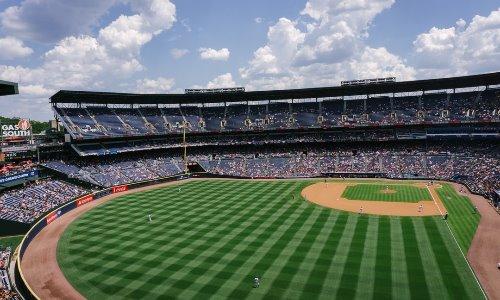 The game of baseball is traditionally played between two teams each consisting of nine players using a bat and a ball taking turns batting and fielding.

The offensive often referred to as the bating team will attempt to score points by using the bat to hit the ball tossed by the pitcher before running in a counter-clockwise direction on three bases before reaching the home plate to complete the run and score a point.

Players on the while batting will consecutively take turns hitting the ball against the defensive team including the pitcher and fielders who will attempt to prevent the batting team from scoring by outing the batters in a number of ways. The batter at any point may stop on any of the three bases and then advance depending on his batting teammate’s hit. The game of baseball constitutes of a total of nine innings with each team allowing one turn at batting starting with the home team giving the visitors the option to bat first. The game at the end of the nine innings will declare the team with the most runs the winner.

Within Canada and the United States professional Major League Baseball is governed by a rule which divides the teams into two specific leagues known as the American and the National League each consisting of three divisions of Central, East and West. The champion of the major league division is resolved during an elimination tournament known as the playoffs traditionally held at the end of the regular baseball season or World Series. In Japanese baseball today the top level players are currently split between the Pacific and Central Leagues whilst in Cuban baseball it is currently between the East and West leagues.

▪       The earliest form of baseball was played in England during the middle of the 18th century and later brought to the North American region by immigrants who later developed the game which by the late 19th century was noted as the national sport of the United States of America and today widely renown in North, Central, South America as well as Canada, Eastern Asia, Europe and the Caribbean.

▪       A 1344 French holograph contains a picture of religious clergymen playing a traditional team sport known as  choule in which a bat called a soul was uses to hit a leather ball suggesting one possible theory that France may have been the origin of baseball.

▪       The first acknowledged reference to baseball played in America was during 1791 in Pittsfield, Massachusetts forbidding the game from being played nearby the town’s recently constructed meeting house. During 1796 a form of the game was renowned enough that it was allude to a book written by a German scholar and educator Johann Gutsmuths on popular leisure activities. This version of the game as catalogued by the German educator consisted of two teams each allowed three attempts to hit the ball, however only one out was required to retire the team.

▪       Prior to being known as baseball the sport was formerly known as town ball, round-ball and base-ball. However it was not until 1845 when a member of the New York City’s Knickerbockers club known as Alexander Cartwright that a process of standardizing and developing a number of rules was implemented. This in effect created a number of rules such as the use of a smaller and harder ball, underhand pitching as well as a number of other practices.

Oregon State University since 1907 has recognized the Goss Stadium at Colman Field as the home venue for the Oregon State Baseball Team. Prior to the rehabilitation of the venue in 1999, the park was officially known as the Coleman Field. Today the Goss Stadium at Coleman Field holds a maximum capacity of 2,300 and comprises of a concession area and lobby, rest room facilities, storage area, dugouts, and a special section set up for the media personnel to broadcast their reports.

The University via their website broadcasts a live stream overlooking the Goss Stadium baseball field shown in the link below.

The ABC11 AccuView Weather Stations broadcast a live stream via a number of webcams designed to accumulate and report the current weather conditions of a particular area per minute. Located in North Carolina these high definition webcams allow viewers to access the most recent information and live video streams of the existing weather conditions in their local area by visiting the link below.

The construction of the El Paso ball field which began in the spring of 2013 is scheduled for completion in April 2014 at which the park is expected to be opened to the public. The ballpark upon completion is planned to consist of the state-of-art facilities and home venue to the San Diego padre’s baseball team.

The City of El Paso via their website broadcasts a live video stream of the construction site of this downtown ballpark from a numb of angles consistently updated on a 24 hour basis including controllable features such as zoom and an interactive calendar.