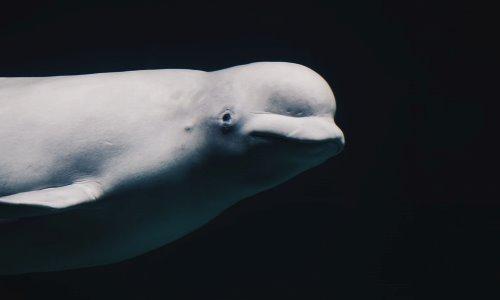 Beluga whales are highly socialized mammals which are found to live in groups called pods. These creatures of the sea are also nurtured and raised in captivity by humans. The video footage given below shows two beluga whales from Sea World Orlando interacting with humans.

Intelligence level of these mammals is very high, because of which they have the ability to interpret the prime motives of the humans. After understanding that there is no threat involved, these whales interact freely. Beluga whales are very calm and friendly creatures and rarely show violence in wilderness.

Vancouver Aquarium is located in Stanley Park in Vancouver, Canada. This public aquarium is home for 70,000 animals from over 6,000 species. With a total space of 2.1 acres, the aquarium has turned this place into a popular tourist attraction ever since its inauguration on June 15, 1956.

Not just an aquarium, this facility also has a marine research centre that works on conservation and protection of marine animals. A total of 166 aquatic displays have been distributed among several galleries which are in turn divided according to specific environment. The Canada’s Artic gallery shelters all beluga whales in Vancouver aquarium. Popularly quotes as the “Guardian of the sea”, these white whale graces the cold waters of Artic and Sub-Artic oceans.

A fully grown Beluga whale has a size between that of a dolphin and a whale. Besides being highly sensitive to sounds, these whales are known to grow over 5 metres. Vancouver Aquarium, Canada shelters a couple of beluga whales. Lot of people from around the globe come to watch the 25 year old Aurora and her daughter Qila leisurely wander around its big pool. Best viewing hours are from 6 am to 8 pm. The marine science centre educates and inspires people to fight against the injustice caused to these mammals. Currently, there are 7 Canadian based beluga whale population out of which, 4 are endangered and suffer from of global the harmful consequence warming.

The aquarium conducts many research and education programs for the visitors in order to teach them how vital it is to conserve these magnificent creatures of the sea.

The Georgia Aquarium is a site built for the purpose of sheltering and feeding a vast variety of oceanic as well as fresh water animals. With a total number of about 1 20 000 animals from over 500 species, the building makes use of 32 000 m3 of water to keep these aquatic animals in good condition. The aquariums most popular specimens comprise of whale sharks, dolphins, belugas, manta rays and bottlenose dolphins.

Outside Asia, this aquarium is the only facility which is house for whale sharks. There are 6 galleries in the aquarium which are divided as per the specific environment required for its inhabitants. The Cold Water Quest gallery features animals and mammals from the polar region and is home to 4 beluga whales. With the help of sophisticated digital web cams, the aquarium streams live videos and snapshots of beluga whales graciously circling the exhibit. These whales search for food at sea beds as they primarily feed on bottom-dwelling animals. Making use of their thick lips and powerful lungs, beluga whales detaches the animal simply by sucking it in.

Cook Inlet has been home for a few hundred beluga whales for many years. This region comprises the 180 mile stretch of beaches ranging from Gulf of Alaska to Anchorage. By comparing the data’s recorded over the span of ten years, scientists have confirmed a gradual decline of 0.6 % in population every year. If left on its own course, the survival of these whales is seems to be very difficult. By using the World Wide Web as a platform, the aquarium intends to increase awareness to people regarding the declining population of Beluga whales in the Cock Inlet region.

In association with Artic Watch Lodge, the Canadian museum of nature has taken the initiative to set and stream live videos of Wild Beluga Whales from the remote Canadian Artic Islands. The water of Cunningham River flowing through Somerset Island, Nunavut is used by around 2000 whales during their migration period. They travel in groups of hundreds and mingle to exploit the ocean floors for warmth and food. Evidently, they also use the estuary beds to shed skin by brushing against them.