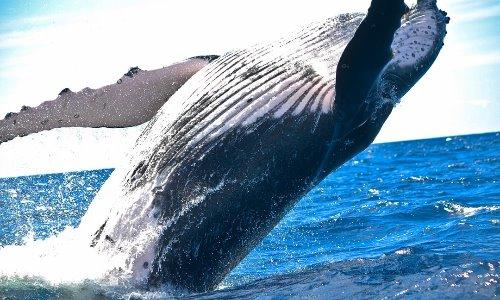 Yet the largest creature in the world tends to feed on some of the smallest creatures in the sea: krill. Some blue whales have been known to live for over 100 years.

#1. The mouth of the blue whale acts like a filter. Through plates and bristles, it can sort out krill, plankton, and other small creatures from the water as it is swimming. Then the blue whale expels the water out of its mouth and repeats the process.

#2. Blue whales are known to swim at depths as low as 500 meters. This makes it one of the deepest diving mammals that we know of on our planet right now. It often dives down deep in order to find food since it needs to eat about 4 tons of plankton and krill on a daily basis to support its size.

#3. The blue whale is also one of the loudest animals on the planet. Although we cannot hear all of the frequencies of their language, the sounds of a blue whale can be heard over 1,600 kilometers away. Blue whales use a series of moans, pulses, and groans to navigate and communicate.

#4. Because of its sheer size, the blue whale has very few predators in the oceans today. If a pod of orcas is large enough, it may consider taking on a smaller blue whale during a hunt. Some larger sharks have also been observed attacking blue whales.

#5. Before the use of crude oil from the ground, blue whales were hunted for the whale oil that could be burned in lamps and other products. Nearly brought to extinction, it is believed that there may be as few as 10,000 blue whales left in our oceans today.

#6. Blue whales have a breeding cycle only once every three years and the gestation period is about 1 year. This means a female blue whale will typically have just one calf, which can weigh nearly 3,000 kilograms at birth, every four years.

#7. Many blue whales are often seen swimming either by themselves or in pairs. When a group of three or more swims together, this is referred to as a pod.

#8. The blue whale is believed to spend summers in the arctic and winters near the equator in order to maximize feeding opportunities.

Blue whales are too large to keep in captivity. They are also very rare to see in the wild. The best opportunity to view them is through an Arctic Ocean webcam like these.

There are several cams online that have captured this large creature in its natural habitat. The cams show the blue whales living together in a pod.