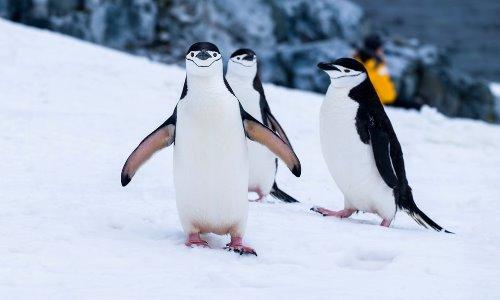 The penguin recognized as part of the Spheniscidae family are classified as a members of aquatic, flightless birds known to primarily habitat in the Southern Hemisphere, particularly in the region of Antarctica. Penguins superbly adapting to an aquatic life use their dark and white layer of feathers as a form of camouflage against a predator. A leopard seal or orca when searching for food looking above has difficulty distinguishing between the the reflective surface of the water and the belly of the penguin.

Additionally protected by the dark plumage on their backs which serves as a form of camouflage from predators above. Consequently it is theorized that the wings of the penguin useless for flight in the air over time evolved into flippers used to maneuver their bodies through the water. Penguins are known to mainly feed on fish, squid, krill and many other marine organisms caught while underwater.

▪  With an average height of about 1 m and a total weight of over 77 lbs the emperor penguin is the largest known species of penguin extant today.

▪  The little blue penguin which stands at around 40 cm in height and just over 2 lb. in weight is the smallest known penguin species living today.

▪  The world first penguin was discovered in the Southern Hemisphere by European explorers during the 16th century who named the bird great auk due to its similar appearance to the great auk typically found in the Northern Hemisphere. Notably both birds do not share any relation.

▪  While swimming underwater the penguin displays a similar motion to a bird’s flight in the air, preserving a layer of air in-between their smooth plumage ensuring their ability to float in the water as well as acting as a form of insulation when in the cold water.

▪  The average penguin can dive at a rate of over 7.5 mph, however it has been reported that some penguins have been found to dive at velocities of up to 17 mph.

▪  Penguins are known to move by either waggling on their feet or sometimes sliding along their bellies across the snow by tobogganing which conserves their energy yet still allowing the bird to move quickly. Simultaneously using both feet the penguin can also jump considerably if they need to move across rocky or steep terrain.

▪  The penguin’s ability to drink salt water is made possible by their supraorbital glands which serves as a filter for removing the excess sodium from the bloodstream and excreting it in the form of a concentrated liquid from their nasal passage.

▪  For the most part with the exception of the Fiordland and yellow-eyed species penguins are known to bred in large colonies ranging from as few as just 100 penguins to as much as several thousand as seen in the chinstrap and macaroni penguins.

The California Academy of Sciences located in San Francisco’s Golden Gate Park is renown for its active participation in the Species Survival Program for African penguins initiated by the American Zoo and Aquarium Association who has been working towards the conservation of penguins living in the wild. Founded in 1853, the Academy has continued to explore, shed light and sustain life of the penguin population threatened by the competition existing from oil spills, commercial fishing operations, predation by wild cats and the removal of guano used by industrial farmers.

The Academy’s Penguin exhibit is brought to you via three Live Penguin Cams featuring a number of penguins native to the South African and Namibian coasts in a naturally recreated environment shown in the link posted below:

The Edinburgh Zoo and Highland Wildlife Park located in the United Kingdom and owned by the Royal Zoological Society of Scotland is home to over 70 Gentoo penguins managed by the European Stud Book program.

Located at 886 Cannery Row, Monterey California, the Monterey Bay Aquarium Splash Zone & Penguins exhibit features a number of African black-footed penguins also known as the jackass penguin native to the cold water currents along the South African coast.
Visitors to their website can view the African black-footed penguins via a live Penguin Cam showing the resident penguins in a naturally recreated habitat.

Aquarium of the Pacific Penguin Webcam
The Aquarium of the Pacific recognized as southern California’s largest aquarium is acknowledged for its vision to create an aquarium committed to the preservation and development of Nature by increasing social interaction among people. The aquarium, home to more than 11,000 animals and over 50 exhibits earns at least 1.5 million visitors each year.

The exhibit known as the June Keyes Penguin Habitat houses the first penguins ever to be included in the Aquarium’s collection and includes a crawl-in space allowing visitors to experience a feeling as though a part of the exhibit.

Online visitors to the Aquarium of the Pacific website can view a live broadcast of the South American Magellanic Penguins from their penguin exhibit via a number of webcams showing the penguins at the edge of the rocky beach, as they dart through the water of the aquarium as well as a penguin nest box webcam showing the penguins tending to their nests and young during the breeding season.