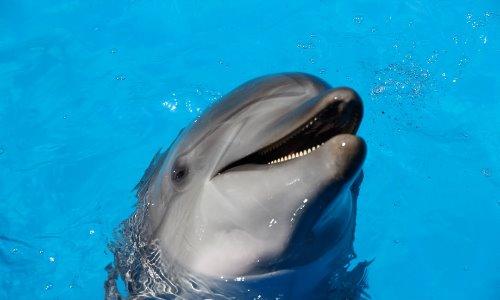 Dolphins are among the most intelligent species to be found on earth. Apart from being smart, these mammals prefer being highly socialized with an average pod size reaching as much as 1 000. Regarding their behaviour towards humans, they are very friendly and interactive. The following video shows three dolphins that follow movements of person. These charming species are very curious and try to figure out what that person was holding in her hand.

Established in 1972, the Clearwater Marine Aquarium was started for the sole purpose of rescuing and rehabilitation of various marine animals, including dolphins. Located in Clearwater, Florida the aquarium is set on the city’s beach for better vision and easy of mobility. The organization comprises of dedicated volunteers who are eager to play their part in safe guarding and preserving this diverse marine life. The crew try finding animals in need of medical attention and bring them back to the base for recovery. Most of these animals are found in disappointing conditions of which 90% are due to the direct influence of humans. There have been cases where crews have found animals trapped in fishing nets and other debris. Clearwater and Marine Aquarium is now home for 4 Atlantic bottlenose dolphins, 3 North American river otters, 4 green sea turtles and many other sea animals.

Located in Key Largo, Florida, Dolphin cove is an aquarium cum marine wildlife centre which conducts activities like boating and swimming with dolphins. The visit becomes even more exiting with a company of well trained and knowledgeable staffs. Trainers casually play with the dolphins and teach visitors on how to confront these friendly creatures. Dolphins can be found swimming in the natural lagoon that opens to the Florida Bay. This offers great chance for visitors to witness their behaviours in their own natural habitat. Everyone gets the opportunity to touch and play these dolphins as they leisurely circle them. Other activities available in Dolphin Cove are shallow water swims and snorkelling which are part of Dolphin Swim Program.

Underwater Explorers Society Grand Bahamas Island is an organization located in Lucaya, Bahamas. UNEXSO comprises of a society that offers tourists first-hand experience with the dolphins and other under water marine animals. As for exploration is concerned, the organization also has facilities for scuba diving and boating programs! The company of certified and professional scuba divers makes the aquatic interaction more profound. Apart from viewing dolphins, there are other fun activities to do such as viewing sharks, rays, reefs and exploring hidden wrecks.

This is the only place to offer so many activities for underwater category alone. Specially trained scuba instructors are allotted for each division so that tourists can gain maximum knowledge about a particular skill set during their stay. The categories are Dolphin dives, Reef dives, Shark dives and Wreck dives. And not just tourists, photographers from around the world come to take pictures of its fascinating and rich underwater marine life.

What started as a Hollywood movie underwater studio set in 1938 has now transformed into an exclusive family attraction for interacting with dolphins. Back in those days the set was called as the Marine Studio and was extensively used for all underwater video footage. As years passed by, many people saw this location as an opportunity to learn more about marine animals. Later, the studio was renamed as Marineland Dolphin Adventure. Now open to the general public, the newly transformed 1.3 million gallon facility is so designed such that animals can get maximum swimming space and scientists can have various viewing points. Rather than watching them perform, guests can get down in water and interact with dolphins personally. This gives them a first-hand experience like never before. And when it comes to conservation, the Marineland Dolphin Adventure society finds it their main goal to enhance marine conservation and animal care.

This dolphin webcam comes to you from the Clearwater Marine Aquarium in Florida and is amazing! They have multiple views and a streaming video pan, tilt and zoom remote control panel. PTZ. You can also see Sea Turtles.

Dolphin Webcam at the Minnesota Zoo

This is one of the best dolphin cams I have seen. Located at the Minnesota Zoo, this has a nice view with streaming video. It is like being right at the aquarium. Watch dolphins swim, play and maybe even see the zoo keepers feeding them. Awesome

This dolphin webcam is located at the Shimoda Aquarium in Japan. The cam can be remotely controlled so you can pan, tilt and zoom.

This is an excellent dolphin webcam that is located at Kolmarden Djurpark in Sweden. Camera updates about once a second and lets you see several dolphins in a huge aquarium with crystal clear water. Awesome! (also known as Delfiner, Delfinarium, Delfin)