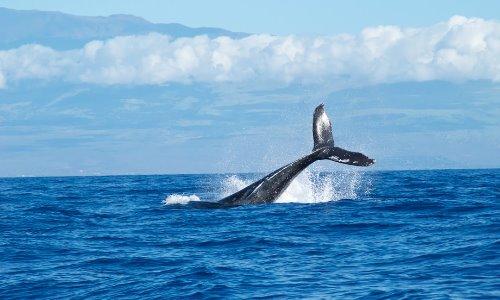 Ocra or Killer Whales are black coloured whales with white chest and belong to the Oceanic Dolphins family. They are known in the wild for their strategic and fierce hunting tactics. But humans should not be frightened on grounds of their predator instincts.

As far as these whales are concerned, they are very friendly and are not known to have claimed lives of humans in the wild. The video below shows how these misunderstood mammals of the ocean interact with humans; who are dear and close to them. Call it curiosity or attachment, but these creatures clearly seem to enjoy the presence of people and cameras.

Known as the “Guardian of the sea”, the Beluga or White whale graces the cold waters of the Artic and Sub-Artic oceans. A fully grown Beluga whale has a size between that of a dolphin and a whale. Besides being highly sensitive to sounds, these whales are known to grow over 5 metres.

The Vancouver Aquarium in Canada shelters a couple of beluga whales. Lot of people from around the globe come to watch the 25 year old Aurora and her daughter Qila leisurely wander around its big pool. Best viewing hours are from 6 am to 8 pm.

The marine science centre educates and inspires people to fight against the injustice caused to these poor mammals. The aquarium conducts many research and education programs for the visitors in order to teach them how vital it is to conserve these magnificent creatures of the sea.

Part of the Oceanic dolphin family, the Killer Whales are toothed mammals that are found in almost all oceans, stretching its existence from the icy cold polar waters to the tropical seas. Also known as the Orca Whale, these natural hunters are considered as apex predators as they hunt for all kinds of oceanic animals.

Although individually specific on choosing their diet, the various animals they hold prey are fishes, walrus, sea lions, seals etc. Orca Live is an organisation that aims in conservation of these beautiful mammals of the ocean. The members of this organization make use of the internet to relay live images and sounds of Orcas from their natural habitats near Hanson Island. With this step towards enlightenment, they believe, viewers will realize the grave dangers these species face and play their part in conservation of natural wildlife. This live feed will also serve as an environmental education tool.

Shamu was the name given to the first Orca killer whale that was put up on the SeaWorld show during the late 1960s. Ocra Shamu died in 1971, but the name continued and was given to several other orca whales that followed on. The cam link given below is from SeaWorld San Diego, California.

Blue Whales are the largest known animal ever to have existed. Weighting over 150 tonnes, these giant mammals can grow as long as 30 metres. The distribution pattern of this species stretches from the warm tropic oceans to cold polar seas.

Some groups are known to migrate long distances to their breeding grounds. Despite being so large, blue whales have a dietary that is rather ironic to its size as they only survive on various species of krill’s. Surprisingly, Killer Whales are the only natural predators of Blue Whales. Studies reveal that around 25% of the total blue whale population have scars resulting from Orca attacks.

Launched in 2004, ‘livescience’ is an appealing source of information on technology and their implementation on conservation of wildlife. The footage shows a blue whale feeding on a swarm of krill’s from a critter cam attached to its body.

Humpback whales are gigantic mammals found in the oceans all around the world. This follows from the fact that they migrate distances as far as 25 000 km each year. These whales are known to feed in the polar waters only during the summers.

They gain weight and then move to tropical seas during winters in order to breed and give birth. They live on krills and some other small fishes. As can be made out from its name, these whales have a distinctive stocky body with a hump which they make use in performing acrobatic stunts. Popular among whale watchers, their sightings are recorded around the coasts of Australia, USA and Canada etc.

Captain Dave’s Dolphin & Whale watching Safari provides one of the best experiences and close encounters to whales and various other kinds of oceanic wildlife. Located in Dana Point, CA, the company owns a hi-tech sailing catamaran that makes daily trips to the ocean.

The excursion plans on showing dolphins and Whales along with some other occasional appearances of bottlenose, seals and sea lions. Another thrilling experience is the underwater viewing Pod that presents an opportunity to meet these sea creatures, up close and face-to-face.

Grey whales are likely to appear between the months December to April, and that for Blue Whales is from May to November. Common dolphins show up in large number while whales are encountered only a couple of times.

Whale Watching TV is so far the best whale webcam I’ve seen. Here you can have a virtual whale watching excursion from the comfort of your home. You can watch four different webcams showing different view points of view – even underwater! They claim to be the ONLY place in the world where you can watch whales. See Blue Whales and dolphins in streaming video. View archived video clips and receive updates via Twitter so you know when each trip is. Awesome stuff!

This whale webcam is located at the Vancouver Aquarium in British Columbia. You can watch Aurora, a beluga whale and her baby beluga whale located in the Arctic Canada habitat in streaming video.