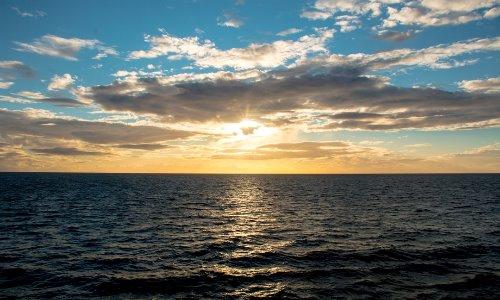 The world ocean or open sea is commonly viewed as the connected body of salt water accounting for more than 70 percent of the total surface of the planet Earth today. The ocean mitigates of the Earth’s climate conditions and is also recognized for its importance by playing an active role in the sequence of events key to sustaining life on the planet consisting of the carbon cycle in addition to the nitrogen and hydrologic cycle.

The scientific study of the ocean or oceanography since ancient times dates as far back as to the voyages of the British explorer, navigator cartographer and captain in the Royal Navy Captain James Cook who travelled the Pacific ocean between 1768 and 1779. The term “sea” when used in the geographical study of lands, the inhabitants, the phenomena and features of the Earth have for some time been simply used to referred to smaller sections of the ocean partially surrounded by land and having no known coastline or seaport, for example as seen in the Sea of Japan, while the term “ocean” is used to describe the names of the five largest bodies of water known for including the Atlantic Ocean, the Pacific Ocean, the Indian Ocean, the Southern Ocean and the Arctic Ocean.

The ocean today is an abundant source of food mostly consisting of fish. In addition the ocean contains a variety of seaweed, mammals and shellfish which are also harvested for food within the open seas or acquired as a food source through the process of aquaculture, otherwise known as aqua farming. Notwithstanding this fact the harvesting of this renewable food resource to the point of diminishing returns has become a major issue of debate.

The ocean today is actively used as a means of transportation by shipping companies, maritime trade for shipping large quantities of goods, generation of electricity, extracting raw minerals such as offshore drilling and deep sea mining, and Naval warfare. Additionally the ocean is used for a wide range of leisure and sporting activities such as scuba diving sailing, surfing, recreational boat fishing, powerboat racing and swimming.

Throughout history the ocean has played an important role in the culture of mankind, with notable literary appearances such as in the Western classical traditional book, Odyssey written by the renown author Homer;  in the figurative art form known as maine art which uses the sea as an inspiration, in theatre, in classical music and even in the cinema.

Facts about the Open Sea

▪  The sea is home to a wide variety of ecosystems and marine habitats, including algae, fungi, bacteria, protists, animals and viruses spanning across its glimmering sun lit surface to its colossal deep and dark regions.

▪  Recognized for its rich abundance of sodium and chloride ions, the sea is additionally known for containing small concentrated but deposits of potassium, sulphate, magnesium and calcium.

▪ Seawater was once thought to have originally been released by the degassing of liquified rock from the Earth’s volcanoes over 4 billion years ago. However recent studies have theorized that much of the ocean may have been formed from comets.

▪  The salinity of the ocean increases with its depth, being significantly lower closest to the surface and at the openings of large rivers, and much higher across the ocean depths.

▪  The twice-daily rise and fall of ocean level is commonly referred to as the ocean tides. These tides are primarily as a result of the Earth’s rotation and the gravitational impact of the Moon orbiting the planet. During each tidal sequence, at any given location the water rises to its maximum height which is referred to the area experiencing a high tide then later receding to its minimum level observing what is generally categorized to as a low tide.

▪  The deepest known location in the open ocean is recognized as the Mariana Trench. The Marina Trench which spans a total length of over 1,600 miles across the seabed, with an average width of about 42 miles and its deepest point almost 7 miles below the ocean surface is located just off the arc-shaped archipelago within the north-western Pacific Ocean known as the Marina Islands.

Operating one of the world-leading Neptune and Venus cabled ocean observatories, Ocean Networks Canada is known for collecting biological, physical, chemical and geological data on the ocean is ways never before made possible.

The facility via a number of online webcams provide an inside view of the ocean seafloor from a number of locations across the Northeastern Pacific Ocean.

The Monterey Bay Aquarium Open Sea Cam offers viewers a once in a lifetime exhibit featuring one of the most diverse communities of open ocean animals ever seen in an aquarium. From the giant bluefin tuna, to the rare and amazing flower hat jellies, the aquarium allows visitors to their website a first-hand look into a mystifying and captivating world revealing life within the ocean.

View Into The Blue Underwater Webcams

View Into The Blue Underwater IP-based webcams are used by universities, researchers among a number of other agencies to inspect and monitor the underwater environment including ports of entry, waterways and marinas.

Their patented, CleanSweep self-cleaning IP network underwater webcams allow researchers and online viewers access to otherwise unseen images and data from a number of locations ranging from the depths of the ocean floor, to lakes, aquariums and even fish hatcheries.