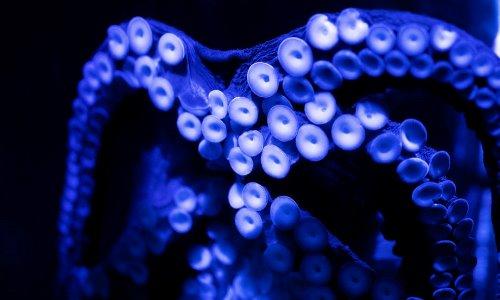 The octopus is found to mostly inhabit diverse regions of the ocean such as coral reefs, pelagic water zones that are neither close to the bottom nor near the shore as well as the ocean floor. When defending itself against a predator the octopus is known for implementing a number of strategies including the use of a camouflage and deistic displays, the discharge of ink, its ability to surge itself quickly through the water and its capacity to conceal itself.

As the octopus swims through the water, its eight arms can be seen training behind it. All species of the octopus are poisonous, however it is only the blue-ringed octopus known to habitat tide pools and coral reefs within the Indian and Pacific Ocean, from Japan to Australia that is known to be lethal to humans.

According to marine scientists the 300 species of octopuses known to exist today make up over one-third of the total number of cephalopod species.

Facts About the Octopus

▪  The octopus has a comparatively short life expectancy with some species living just up to six months. However larger species such as the North Pacific giant octopus are known to live for as much as five years when in an adequate environment.

▪  The leading cause of death among the octopus is attributed to the reproduction process. After mating, the male octopus can only life for just a few months with the females dying shortly after the hatching of their eggs. Death in the female octopuses is primarily due to the species lack of eating during the one-month period while nurturing their unhatched eggs. This results in the female octopuses eventually dying from a depravation of food. In a scientific study of the octopus it was discovered that by removing the two optic glands after spawning the female octopuses were found to experienced a cessation in their broodiness behavior which resulted in a resume of their feeding habits stimulating grown and subsequently an enhanced lifecycle.

▪  The octopus like other cephalopods breathe by pulling in water into its mantle cavity which then passes through its finely divided gills which appear as vascularized outgrowths sometimes in the inner or outer body surface.

▪  The octopus is a highly intelligent species often referred as the cleverest of all invertebrates and are constantly the subject of debate among biologists as to the precise extent of their intelligence. Problem-solving and maze experiments have shown that the octopus that the octopus possesses both long and short-term memory. However it is still unknown as to what the contributing factors are supporting this learning capacity. Notably young octopuses during biological studies have been observed to learn with almost no behavioral patters taught from their parents whom they have little or no interaction with. Nonetheless In many laboratory experiments octopuses can be educated to distinguish between patterns and shapes and have been observed to display what is generally referred to as observational learning ability as well as forms of play which involves the frequent releasing and catching of toys into a circular current within their aquariums.

▪  Occasionally an octopus will break out of their own aquarium and enter anther in search for food, and have even boarded fishing boats and unlocked holds to eat crabs.

▪  Most species of the octopus has the ability to eject a thick black-like ink if the form of a large cloud into the water as a defensive measure to reduce the efficiency of olfactory organs of their prey such as the keen sense of smell used by the shark when hunting; allowing the octopus to escape from a predator. This dark cloud if ink is primarily colored by the chemical known as melanin which is actually the same pigment known to affect the color of the hair and skin in humans.

Recognized the ninth largest aquarium in the United States by attendance the Seattle Aquarium accredited by the Association of Zoos and Aquariums is rated as the top five paid attractions within the Puget Sound region hosting over 22 million visitors since its opening in 1977 and educating more than 1.6 million students in marine conservation.

Featured in the Aquarium’s animal collection housed within the Pacific Coral Reef, one of six major exhibits is a live stream video of a giant Pacific octopus shown 9am-6pm Pacific Standard Time with Feeding Times 12pm and 4pm PST.

The online website of the Oregon State University Hatfield Marine Science Center located in Newport Oregon features two webcams offering visitors to their website with two separate views taken from both inside and outside of the tank. Currently visitors to the website can watch archived footage showing 2 previously housed octopus nicknamed Velma who was released on August 20, 2014 and Raven who was released on March 18, 2014 by clicking on the link provided below.

This octopus cam shows you a giant Pacific octopus and has live streaming video. Watch the octopus swim around and see people in the background watching him. There is also a camera that allows you to watch the feeding times – 1:00 pm on Mondays, Thursdays and Saturdays.

This giant octopus webcam comes to you from the Smithsonian National Zoological Park in Washington, DC. See the octopus swimming in the aquarium and museum visitors walking by in streaming video.