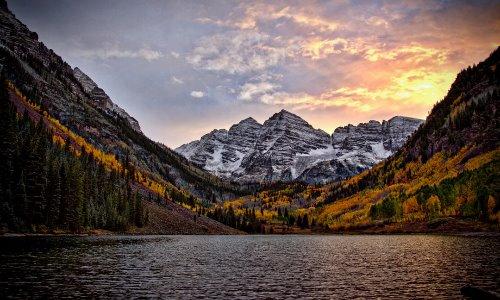 The state of Colorado received its name from the Spanish named Colorado River (Rio Colorado). United States President Ulysses S. Grant on August 1st 1867 signed a declaration allowing Colorado entry into the Union to be recognized as the 38th state of the United States of America. Colorado having become a state during the centennial year of the Declaration of Independence for the United States the state was nicknamed the Centennial State.

Eastern Colorado is known for its vast farmlands consisting of several small farming communities known for producing wheat, corn, oats and soybeans. The territory is additionally known for its expansive livestock including a number of hog farms and cattle ranches primarily sustained by the irrigation water from the Arkansas River fond within the South Platte as well as a handful of other streams and subterranean springs such as artesian wells.

The Arapahoe Basin Ski Resort located in Summit County, Colorado and home to more than four hundred thousand visitors per year is covered in over three hundred inches of snow during the winter season. The Arapahoe Basin to most Coloradans is popularly referred to as “The Legend” containing one of the longest seasons for skiing in the United States from October to June.

The Resort contains several webcams providing online viewers with a live broadcast featuring a number of locations including the Snow Plume Refuge, the Mid-Mountain/Black Mountain Lodge, the Beach/Bottom of Pali and a fe others by clicking on the link provided below.

Beaver Creek Resort initially designed to welcome skiers of all levels was first opened to the public on December 15th 1980. Since then the facility has played host to a number of major events including he World Ski Championships in 1989 in addition to seven consecutive years of hosting the Prey World Cup and Audi Birds of Prey to a vast audience consisting of hundreds of professional skiers and spectators.

Beaver Creek via its website hosts a number of webcams with a live video stream allowing visitors an in-depth look at the surrounding areas including the Family Ice Arena, BC Ranch and several other locations by visiting the link below.

Webcams are updated per five minutes, between 6:00am through to 3:55pm daily.

Located in western Colorado, United States, the Black Canyon of the Gunnison National Park containing 12 miles of the 48-mile canyon of the Gunnison River is a National Park operated by the National Park Service. Visitors to the park are allowed access from three specific locations. The first and more developed entrance point is found some 37 miles east of Montrose and slightly wet of the Blue Mesa Reservoir. The second entrance known as the south rim entrance is located 15 miles east of Montrose and the third entrance or north rim entrance which is generally closed during the winter months is found 11 miles south of Crawford.

The park contains two webcams providing online viewers with a live stream from Gunnison Point and Grizzly Ridge shown in the link below.

Royal Gorge Bridge Webcam
This is an awesome webcam that gives a view of the Royal Gorge Bridge and park located in Canon City, Colorado. If you have never been, it is a must see landmark. You can walk or drive over the bridge and ride a tram to the bottom of the gorge if you like. If you are standing on the bridge it is pretty scary… look through the cracks and you might barely be able see tiny white water rafters below.

Boulder Colorado Webcam
This webcam gives a live view of Boulder, Colorado and the Rocky Mountains in the background. It is an Live view – AXIS 211M Network Camera with a large image that updates every second.