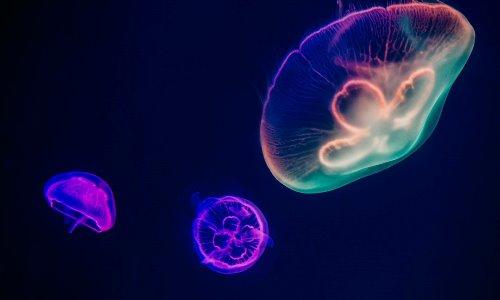 Easily identified as a free-swimming marine organism consisting of a jellylike umbrella-shaped bell and dangling tentacles the jellyfish is acknowledged as the oldest extant multi-organ animal believed to have roamed the seas for possibly seven hundred million years.

The jellyfish often referred to as jellies are recognized as the foremost non-polyp form of organism of the taxonomic rank phylum Cnidaria. The jellyfish pulsates its jellylike umbrella-shaped bell for moving through the water, while its tentacles are used to sting and capture its prey. Jellyfish can be commonly found from the depths to to the surface waters of every body of ocean worldwide, however a few species have been known to inhabit freshwater areas.

The popular name jellyfish ever since 1976 has frequently been used when referring to other organisms known for sharing a superficial resemblance to the jellyfish such as in the case of other members of the phylum form of free-swimming planktonic carnivores today known as comb jellies.

Despite the fact that some biologists will include the term phylum Ctenophora when commonly referring to the jellyfish, others are known to be more partial the use of the broad term gelatinous zooplankton to jointly describe the jellyfish along with other soft-bodied organisms generally found within the water column. Additionally the term jellyfish is considered by many scientists to suggest a meaning known to be incorrect as the jellyfish due to its true nature cannot be classified as a vertebrae, let alone a true member of the paraphyletic group of fish. As such most aquariums today known for containing jellyfish exhibits will generally use the increasingly popular term jellies when referring to organisms in this taxon.

Facts about the jellyfish

▪  Large groups jellyfish are known to gather in a relatively small area is commonly referred to as a bloom. Another collective term used to describe the ability of the jellyfish to stay together in groups seen in only a few species such as the Aurelia genus of scyphozoan jellyfish, the moon jelly is a swarm.

▪  Very few species of jellyfish have specialized circulatory, central nervous, digestive, respiratory, or osmoregulatory systems. The stalk-like shape seen hanging down from the underside, with the mouth at its point leading to the gastrovascular cavity is known as the manubrium and is recognized as the area where the jellyfish digests its food and absorbs the nutrients.

▪  Due to its thin skin which serves as a means of oxygenating its body via diffusion the jellyfish does not require a respiratory system and although they are known to have a limited amount of control over their bodily movement they can navigate through the water using contraction-pulses of their hydrostatic skeleton bell-like bodies.

▪ The body of a jellyfish depending on the species will generally contain between ninety-five to ninety-eight percent water.

▪  Most jellyfish see via light-sensitive organs known as ocelli (generally pigmented), which do not form distinctive images but instead detect light shining on the water surface so as to determine up from down. Other species of jellyfish such as the box jellyfish are known for having a more advanced vision consisting of twenty-four eyes, two of which allow the species to distinguish color variations, along with four small sensory parallel structures making the box jellyfish one of the few creatures supposedly having a 360-degree view.

▪ The average jellyfish will range in size from a bell height and diameter of one to two millimeters not including its mouth parts and tentacles. The smallest of which is known as the creeping jellyfish which has a bell height of 0.5 millimeters and short tentacles used to crawl around on the bottom of rocky ponds and seaweed. Notably the creeping jellyfish cannot be seen without the use of a microscope and reproduce asexually by fusion which involves the jellyfish by splitting themselves in half.

▪  Jellyfish given enough food will spawn daily when reaching adult size. In nearly all species of jellyfish, spanning is primarily controlled by the availability of light which will result in the entire population of jellyfish spawning just about the same time of day, which is generally at dawn or dusk. Jellyfish are usually seen as either male or female, as well as occasionally hermaphrodite and can reproduce both sexually and asexually by releasing sperm and eggs into the nearby water, where the eggs are later fertilized, maturing into new jellyfish. There are however a few species of jellyfish such as the moon jellies which observe the sperm will swim into the mouth of the female, fertilizing the eggs within her body, subsequently remaining there during the early stages of development.

▪ Characteristic of all Cnidaria the jellyfish will sting its prey or defend itself by using an explosive cell containing one giant secretory organelle known as a cnidocysts. Simply touching a jellyfish can provoke millions of these cnidocysts to pierce the skin and insert venom. Coming into contact with a jellyfish even if that jellyfish is beached and dying can become an uncomfortable experience often requiring medical assistance. The sting effects of the jellyfish can range from mild to severe pain and possible death as seen in the case of the especially toxic Irukandji jellyfish.

The LiveAnimals TV website is known for their love and appreciation of nature and animal wildlife. Committed in their efforts to aggregate and broadcast live webcam videos of a wide variety of animals to viewers worldwide as a form of recognition and support, the website features a live Jellyfish Web Cam powered by explore.org showing the moon jellyfish otherwise known as the west coast sea nettles recorded in the video link posted below.