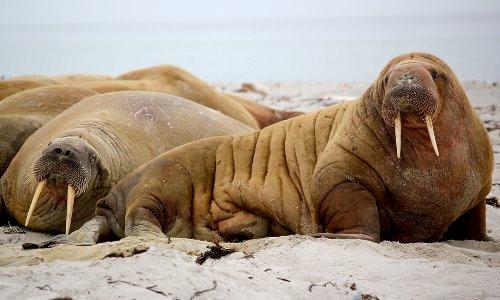 Classified as the only extant species in the Odobenide family and the Odobenus genus, the walrus is a large marine mammal found in the Arctic Ocean of the North Pole and subartic seas of the Northern Hemisphere.

Both female and male adult walruses can be easily recognized by their large tusks, whiskers and their large cinnamon brown colored unwieldy bodies. Adult males found within the Pacific can weigh between 3,700 to as much as up to 4,400 pounds while males native to the Atlantic will often weigh an estimated 10 – 20% less.

Female walruses in the weigh about two-thirds as much as males. A female walrus in the Atlantic region will often weigh about 1,230 pounds while a Pacific female will weigh an average of 880 pounds.

Walruses are known to mostly habitat shallow waters and underwater land masses where they spend much of their time on the frozen seawater searching for clams, mussels and other organisms found within the benthic zone (the ecological region at the lowest level of an ocean or lake).

Considered as a “keystone species” within the Arctic marine regions walruses are social animals who for centuries have played an important role in the cultures of the earliest inhabitants of the North America’s central and eastern Arctic who were known to hunt the walrus for its bone, fat, meat, skin and tusks.

This tradition which has continued throughout the 19th and early 20th century by American and European sealers and whalers has resulted in a significant decrease in the population and near extirpation of walruses in the Arctic region. Since then the outlaw of commercial walrus harvesting has resulted in a somewhat rebound of the walrus population.

Nonetheless the populations of walruses in the Atlantic and regions of the Laptev Sea still remain at low levels as Chukchi, Yupik and Inuit peoples continue to kill in walrus in small numbers. The worldwide population of the walrus is estimated at about 250,000 individuals with the Pacific walruses accounting for more than 200,000.

Facts about the Walrus

• A walruses hide generally accounts for 20% of its total body weight. In 1909 on the uninhabited archipelago known as Franz Josef Land in the Arctic Ocean a walrus hide weighing 1,100 pounds was collected. The following year a man by the name of Jack Woodson shot a 16 ft male walrus and harvested its hide weighing 1,000 pounds.

• Walruses were traditionally hunted for their meat, which when preserved serves as an important source for nutrition, their flippers which were fermented and kept until spring as a delicacy, their oils which was rendered for light and warmth, their skin which was used to make rope and boat coverings and their tusks which were used to make tools and handcraft materials. While some of these traditional uses have given way to modern technologies, the walrus meat remains an important source of food and their tusks when carved and engraved a crucial art form.

• Tusks among walruses are relatively longer and thicker in males than females and are generally no more than about three feet in males and approximately two and a half feet long in females. A walrus uses its tusks for fighting and to show dominance in social groups. They are also used to dig holes in the ice as well as to aid the walrus in climbing out of the water onto the ice. Notably Atlantic walruses have relatively shorter tusks and slightly flattened snout than Pacific walruses.

• Walruses tend to socialize and group themselves in large numbers and will haul out in separate herds of males and females during the non-breeding season. In herds stronger males will establish their dominance through treats made involving their tusks and bodily aggression. This generally occurs between the two largest walruses in the group.

• Walruses will mate from January to March with males gathering in the water forming large groups around estrous females to engage in competitive vocal displays. A female gestation period can generally last up to 16 months at which she will spend the first three to four months of the early stages of embryonic development with the blastula suspended. It is theorized that this delayed implantation is to make the best of the ecological conditions of the mating and birthing season to ensure the survival of the newborn. After the mating season and during the late summer and fall, Pacific walruses often tend to migrate in large groups consisting of thousands of individuals from the Bering Sea into the Chukchi Sea making their way through the narrow Bering Strait.

• Due to their large size walruses have two natural predators: the polar bear and the killer whale. Though the walrus does not make up a significant component of neither predators diet both are likely to prey on walrus calves. That said a polar bear will seldom attack a walrus directly as most attacks generally end up protracted and exhausting. And though walruses have been known to successfully defend themselves when attacked by a killer whale, killer whales will regularly attack walruses and have been observed on many occasions successfully killing a walrus.

The Indianapolis Zoo houses two of the 19 walruses found in the United States. A veteran adult female named Aurora and a male Pacific walrus calf named Pakak who was found stranded off the Northern Alaska coast in 2012. The Zoo which features a Walrus webcam allows online viewers to watch their walrus exhibit by clicking on the link provided below.