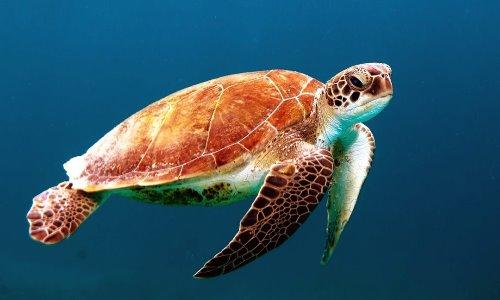 As a reptilian member of the Chelonii family, the turtle is distinguished by a type of bone like shield shell developed from their ribs. Most species of turtles can be found in either fresh-water or sea-dwelling habitat and as such are referred to as part of the chelonian order. The turtle being the oldest member of the Chelonii family is known for including both the living and extinct species with the earliest known member dating as far back as over 220 million years.

Although turtles like other reptiles are generally observed as cold-blooded, due to their varying internal temperatures according to the surrounding environment they are often classified as ectotherms. Yet while this characteristic is generally applicable to the majority of the order, the high rate of metabolism of the leatherback sea turtles allows this particular species to display a body temperature somewhat elevated to its surrounding water.

Turtles are known for breathing through the air and although many of the species can be found living in or around water do not lay their eggs in an underwater environment this particular trait has allowed the family to be categorized along with other reptiles, mammals and birds as amniotes.

▪       In the United States all members of the chelonian family including tortoises and terrapins are often referred to as turtles whilst in Great Britain the word turtle is reserved for sea-dwelling species and seldom used for tortoises.

▪       The largest known chelonian living today is the leatherback sea turtle. The leatherback sea turtle’s shell has been known to reach a full length of more than 6 ft with the species sometimes weighing as much as 2,000 pounds. In light of this fact the largest chelonian ever encountered was the Late Cretaceous sea turtle of the extinct Archelon ischyros genus which was observed to be as long as almost 15ft.

▪       The smallest turtle to date is known as the South African speckled padloper tortoise measuring no more than 3 inches in length and a total weight of 4.9 ounces.

▪       A turtle’s shell is primarily composed of two layers, an upper shell which is known as the carapace and a lower shell encasing the belly referred to as the plastron, both joined together at the sides by a series of bone like formations known as bridges. The turtle’s inner shell however consists of an estimated 60 bones which include sections of the backbone and ribs preventing the turtle from ever crawling out of its shell. Most turtles are known for having their outer shell covered in a layer of horn like scales or scutes made from fibrous protein forming part of their outer skin which is known for adding strength to the shell by overlapping the ridges in-between the shell bones. Other species such as the short-shelled and leatherback sea turtles are known for their leather shin covered shell.

▪       Most species of turtles spend a large portion of their lives on land eyes fixed looking down at objects in front of them. However some species of aquatic turtles such as the soft-shelled and snapping turtle have been observed with their eyes positioned closer to the top of their head allowing the species to hide themselves from a suspected predator by submerging their bodies in shallow water without the eyes and nostrils.

▪       Sea turtles are known for possessing salt producing tear glands found near the eyes which are used to remove any excess sodium from its body taken in from sea water previously consumed.

▪       Due to the appearance of an exceptionally large amount of photoreceptor cells within the retina of the eye, turtles are theorized to have excellent night vision.

▪       Unlike other reptiles the turtle cannot extend their tongue to catch food but rather will use the tongue as a means to facilitate the swallowing of their food.

This webcam funded by the Florida Keys Tourist Development was installed on a privately owned beach located on the Lower Florida Keys Big Pine Key to allow environmentalists to watch the hatching of the loggerhead sea turtles as they emerged from their nests. Online viewers by visiting the link posted below will be able to access a recorded video featuring the hatching of the third nest of the loggerhead sea turtles.

Texas A&M Galveston University’s new Sea Life Facility currently houses several species of recovering sea turtles to be released to their natural habitat in the Gulf of Mexico. This facility although primarily developed to function as a marine research will additionally serves as a recovery resource in support for at risk of injured turtles. The Texas A&M University at Galveston new Sea Life Facility allows online visitors to the website to watch a live video of the turtles from their outreach center by visiting the link posted below.

The South Padre Sea Turtle Cam powered by Sea Turtle Inc was formed specifically to aid in the protection and restoration of the Atlantic Ridley Sea Turtle. This Sea Turtle webcam funded by the South Padre Travelodge and Southpadre.com allows online viewers to watch the resident Sea Turtles in their tanks featured in a live 27/7 video stream of the Sea Turtle education, rescue, rehabilitation and research facility.