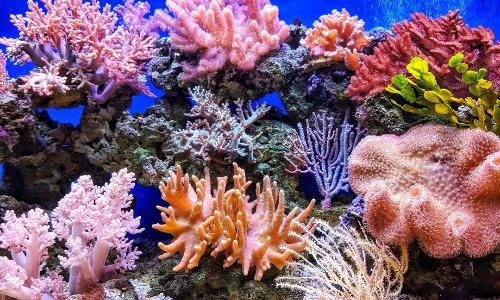 Preserved by calcium carbonate structures deposited by corals; coral reefs are recognized as diverse underwater ecosystems which are built by colonies of microscopic marine animals containing a small amount of nutrients. Most of the coral reefs seen today have been formed from a hard stony substance secreted by certain marine coelenterates forming an external skeleton known for consisting of polyps, which over time clusters into a group creating the coral reef. These polyps are known to belong to a family of marine animals know as Cnidaria of which both the jellyfish and sea anemones are also members.

However unlike the anemones, the coral secretes a hard salt like exoskeleton which serves to protect and support the coral polyps.

Forming some of the planet’s most productive ecosystems, coral reefs offer a highly complex and diverse marine habitat that is known for supporting a wide variety of other marine organisms. Some types of coral reefs which are generally found just below tide level will have a mutually beneficial relationship with swamp forests. During the high tide the coral reef will protect the swamp forest from strong currents which would naturally erode the sediments in which the trees are rooted. While the forests in return will protect the coral reefs from large influxes of soil, fresh water as well as any other pollutants which could be harmful to the coral reef.

• Generally referred to as the “rainforests of the sea” the variety of species found living on a coral reef is far greater than in any other shallow-water marine ecosystem, ideally making the coral reef one of the most diverse ecosystems ever encountered on the planet.

• There are three main types of coral reefs; The Atoll reef which exists as a uninterrupted barrier reef stretching the entire distance around a lagoon without a central island. The Barrier Reef which can be seen detached from the island or mainland by a deep passage or a lagoon.And the fringing reef which is directly attached to the shoreline or bordering within a channel or lagoon in-between.

• Coral reefs occupy less than 0.1% of the Earth’s ocean surface which is about half the size of France. Yet they are known to support an estimated 25% of all known marine species including crustaceans, cnidarians, echinoderms, mollusks, sponges, fish and worms

• The Florida Keys National Marine Sanctuary home to more than 500 known species of fish and an innumerable amount of other types of marine life with it’s extensive reef tract protects over 50 species of coral including the federally protected Elkhorn and Staghorn corals.

• Coral reefs are known to grow best in agitated, clear, shallow, sunny and warm waters. And can even flourish in an environment which offers very few nutrients. However they are mostly found at shallow depths in tropical waters. But can also seen on a smaller scale at greater ocean depths and in cold water.

• Corals are known to reproduce both asexually and sexually. Throughout it’s lifetime a single polyp will use both its reproductive nodes. As such corals will reproduce sexually by either external fertilization, or internal fertilization. The coral’s generative cells can be found on a tissue layer that radiates inward from the lines of the coral’s digestive cavity. Although some adult male corals are hermaphroditic in their nature others exist as either male or female. However there are a few species of corals which are known to change their sex as they mature.

• Delivering an ecosystem service to fisheries, protection of the shoreline and the tourism industry in many countries, the global economic value of coral reefs is estimated somewhere between USD$ 29 to 375 billion.

• Exceedingly sensitive to changes in the water temperature coral reefs are recognized as highly delicate ecosystems. As such they are constantly in danger from blast and cyanide fishing, climate change, oceanic acidification, sunscreen use, not to mention corrupt practices of land-use such as water pollution and agricultural runoffs which are known to contain toxic pesticides known to promote excess growth in algae which in turn is harmful to the coral reefs.

• Scientists today have made the approximation that over one million species of plant and animals are related with coral reef ecosystems.

Consisting of over 7000 known islands, the Philippines today is recognized as home to the richest biodiversity of tropical marine life. Supporting more than 2000 species of fish and over 500 species of coral, the Philippines is acknowledged as a primary target and hotspot for scientific research. The Philippine Coral Reef live Webcam exhibit shown in the link posted below replicates just some of the variety of marine life found within this natural resource.

The Pacific Reef which houses more than 60 species of coral reef offers viewers a live broadcast into the complex group of a true living Coral Reef. Viewers by clicking the link posted below can view brilliantly colored Clownfish and Tangs swimming along the Coral Reefs as Snails and Hermit Crabs crawl slowly on the floor. The Pacific Coral Reef Webcam exhibit which is a part of the North Atlantic to the Pacific Gallery is hosted at the National Aquarium inBaltimore, United States and can be seen best during the hours of 8:00 a.m to 10:00 p.m Eastern Time.

Undoubtably the Aquarium’s largest exhibit, the Aquarium Of The Pacific contains more than 1000 marine creatures in over 350,000 gallons of water representing the lush and world renown area known as the Blue Corner which is located off the coast of Palau in the western Pacific Ocean. You can watch the Tropical Reef Habitat by clicking the link posted below to view one of the most beautiful and diverse sites and possibly catch a diver on cam feeding the fish or cleaning exhibit.

ReefCam offers viewers a first-hand view from the diver’s perspective of the marine life while remaining in the comfort of your own home. The Grand Cayman ReefCam shown in the link posted below made possible by a grant made to the Teens4Oceans program of the Dates Family Foundation located in Denver, Colorado in the United States shows a live broadcast taken from the coral reef cleaning station off the Grand Cayman Island coast.