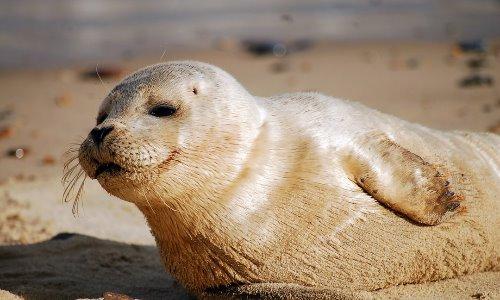 Pinnipeds commonly referred to as seals are a diverse group of fin-footed semiaquatic marine animals found all over the world. Members of the order Carnivora there are 33 extant species of pinnipeds of which the closest living relatives are bears, and musteloids.

Seals according to the species will range in size. From the Baikal seal having a length of just over three feet and a weight of about 99 pounds to the southern elephant seal with a total length of over 16 feet and weighing in at over 7,000 pounds.

Although widespread, most species will prefer the habitat of the cold waters found in the Northern and Southern Hemispheres. Seals known for their amphibious lifestyle will spend most of their time in the water and will occasionally go ashore when molting (shedding of their skin which takes place once a year), mating,  give birth to their pups or to escape from aquatic predators such as killer whales and sharks.

They will migrate over vast distances when extreme changes in habitat occur such as changes in ice cover or during the warm phase of the El Niňo Southern Oscillation which occurs in the central and east-central equatorial Pacific.

Hosting nearly one million visitors annually the Toledo Zoo features a wide range of fun activities, including several animal webcam exhibits. The zoo which is home to both a Grey and a Harbor seal allows online viewers to watch a live video as shown in the links posted below.

EarthCam Networks in a joint effort with the Western Alliance for Nature conservation founded to protect threatened habitats offers online viewers a breathtaking opportunity to view a colony of California Harbor Seals give birth to their pups. Viewers by way of this live webcam can watch as these seals raise their offspring while teaching them how to dive and swim.

The Live Animals TV Seal Webcam is a joint effort between the Friends of the Elephant Seal and the California State Parks. The webcam which is located on the Pacific Coast of California in-between San Simeon and the Piedras Blancas Light Station shows a pod of elephant seals who have come ashore to grow new hair and skin (molt) as well as females who have returned from their two month foraging trip after giving birth to their cubs.

This live video is made available by way of Ustream Networks and can be viewed by visiting the link posted below.

See more webcams that let you take a look at various seals in their natural and captive habitats in the wild and at zoos around the world. Seals you may see include common, elephant, harp, leopard, gray, Antarctic and more.

This webcam is located at Donna Nook Nature Reserve in the UK and gives you a view of grey seals.

The Ano Nuevo Island webcam use to be home of the best Elephant Seal webcam on the Internet, but it is currently down. However, you can view archived video by following this link.

See the famous California Sea Lions at Pier 39 in San Francisco at the K dock. You may have to check back from time to time to get a good show. Some time ago most of the sea lions mysteriously disappeared. Not sure if that mystery has been solved yet. This cam can be remotely controlled, too.

These seal cams may or may not work – keep checking to see if they do. If so, you can see Harp seals and Logy Bay.

This seal webcam comes to you live from Moody Gardens Aquarium in Galveston, Texas. Watch harbor seals swimming and playing in their habitat.