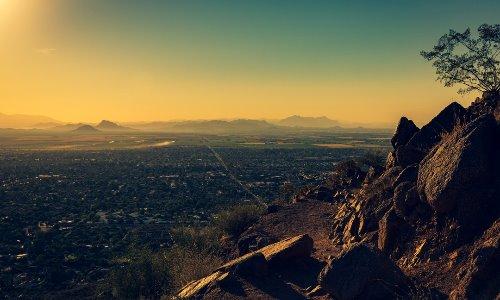 The video featured below is from a motorist as they commute through Phoenix congested highways. The motorist is shown as they travel at 16mph through the stop and go traffic. The freeways current system is comprised of routes I-17 and I-10 and a variety of highways such as SR 85 and SR 51.

The South Mountains is located in the southern area of Phoenix, Arizona. The mountain spreads throughout central Arizona and is on public land that is considered to be sacred. Located on the land is also South Mountain Park which is the United States largest city park. The park is also known as a popular urban park and one of the world’s largest urban parks. The Park was referred to as Phoenix Mountain Park and the Salt River Mountains until it was sold and expanded by the city of Phoenix.
The webcam link shows aerial footage from a camera located in the South Mountains in Arizona.

ADot stands for the Arizona Department of Transportation were created in 1974 after the AZ Department of Aeronautics combined with the AZ Highway Department. The agency manages the state of Arizona highway system.  The agency responsibilities also include the management of the municipal airports the areas public transportation.

Downtown Phoenix
Visitors and locals of Phoenix flock to the downtown area for its many features such as the area employment opportunities, skyscrapers, cultural and arts institutions. The downtown area is also famous for its prominent banking and finance regional headquarters such as Midfirst Bank, JP Morgan Chase, Wells Fargo US Bank, Compass Bank and Bank of America.

The link below is to a street cam located in the downtown area of Phoenix. Shown in the footage is intersection as well as a no parking sign, tall buildings and traffic lights. 7th Street thru 7th Avenue is considered as the downtown area as well as the surrounding area of Central Avenue and Washington Street.

The Salt River Bridge is located in Arizona was built originally in 1920. The bridge load-bearing superstructure was made of truss which is why it is defined as a truss bridge. As of 1996 the new Salt River Canyon Bridge (Apache Bridge) was constructed. The bridge overall length is 380 feet with a main span of 57 miles and has a concrete and steel arch. The bridge runs across the bottom or the Salt River Canyon.

The video below is of the Salt River Bridge. The Salt River is an Arizona stream that stretches approximately two hundred miles with an estimated 13,700 square mile drainage basin.

The webcam footage below is of aerial views from the Camel Back Mountains. Views of buildings, mountains, and sky conditions can be viewed in the footage. The recreation area is a popular attractions for those in the area to hike and rock climb.

Two strenuous hiking trials can be found in the area which ascends over 1,200 feet and a red sandstone rock formation referred to as the Praying Monk. Sitting approximately 30 miles the Praying Monk is used for rock climbing and has been said to remind people of a silhouette of a man that is kneeling in prayer.