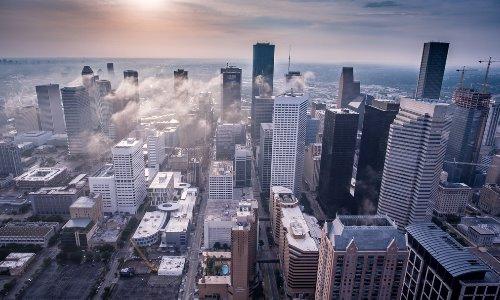 In 2009 it was reported that commuters in Houston, Texas spent on average a whopping 58 hours stuck in traffic. This placed the city in 4th place for the worst congestion located in the country.  Houston was described in a 2010 U.S Census’s report, as the 4th largest city in both the located within the United States and the state of Texas. Founded in 1836 Houston is the home of the world largest research and healthcare institutions.

The video below of is of a motorist capturing his morning commute. The morning radio announcer can be heard in the background supplying traffic condition updates. As the radio announcer reported it is 7:22am and currently there is a traffic jam due to a wreck on the Southwest freeway.

The Hardy Toll Road runs throughout the central area of Houston, Texas right below the Harris County line. The Hardy Toll Road is named after the Hardy St which is located close by the road.
The footage located in the link below is from The Houston TranStar traffic camera at the Hardy Toll Road at Rankin Ramp Plaza. The road speed limit is 65 miles per hour.  Four lanes can be seen on the footage with two lanes heading in both directions. The toll center can be viewed on the left side of the video.

IH-10 Katy at Taylor Traffic Camera
Interstate Highway 10 is the largest and longest freeway in North America which is does not request a toll and is under a single authority. The highway is maintained under the Texas Dept. of Transportation. Named after its connection to Katy from Houston, the Katy Freeway was added sometime in the nineteen sixties. In the year of 2004 the Katy Freeway began to undergo construction to cover the increasing amount of traffic that traveled throughout the freeway.

The highway over path ramp can be seen to the right of the video. The ramp connects with the West Sam Houston Toll way.

Montrose a city located in Houston Texas was established in the year of 1911. The culturally diverse neighborhood is welcoming to pedestrians. On October 18 in 1989 due to an apparent need to make museums more accessible the area was officially designated as Houston’s Museum District.

The web cam belongs to Jackson D. Myer a photographer from St. Catharines, Ontario, Canada. The camera which updates every min. is located on the top of a roof in the residential area of the Houston’s Montrose neighborhood. The camera footage consist primarily of skyline views. Buildings can be seen in the distance.

Located at Union Station the Minute Maid Ballpark opened in 2000 in downtown Houston Texas. Home of the Houston Astros baseball team the field has a retractable-roofed stadium which is called the Astrodome. This was the first of its kind in Houston which features AstroTurf throughout the field.
The webcam featured in the link below is stationed on a rooftop. A parking garage structure can be seen on the left of the camera footage. When the Astros win a game or when a home run is made from an Astros player a train runs along the length of the wall beyond the left field. The field also contained sixty three luxury suites and over five thousand club seats.