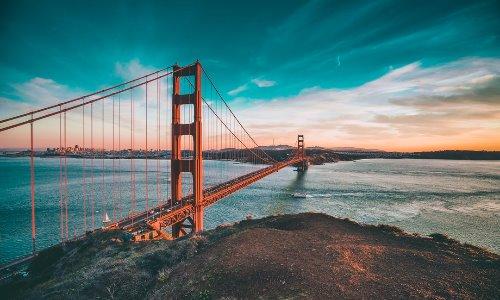 The city of San Francisco was founded by Spanish colonists on June 29, 1776, who upon landing built the Mission San Francisco de Asis in recognition of the founder of the Franciscan Order St. Francis of Assisi subsequently establishing the Presidio of San Francisco Royal Fortress of Saint Francis at the Golden Gate on September 17, 1776.

Notably the only consolidated City-County, San Francisco, California is recognized today as the cultural center and primary commercial center of the San Francisco Bay Area, San Jose-San-Francisco-Oakland as well as Northern Carolina.

With a total area of about 46.9 square miles on its northern end of the San Francisco Peninsula with an estimated population density of 17,867 per square mile, San Francisco, California is seen as the most densely settled city in the state of California and second in the United States to the city of New York.

▪  San Francisco’s earliest evidence of human habitation dates back to the as far as 3000 BC to a group of Ohlone people known s the Yelamu who resided in a few small settlements prior to the arrival of the Spanish explorers.

▪  Gaining its independence from Spain in 1821 the San Francisco became subjected to Mexican rule ending the missionary structure which resulted in the privatization of land.

▪  On July 7,1846 California was claimed for the United States by Commodore John D. Sloat. Yerba Buena two days later during the Mexican-American War was claimed by Captain John B. Montgomery which saw the region formerly known as Yerba Buena on January 30 the following year renamed to San Francisco.

▪  The California Gold Rush between 1848 through to 1855 following the discovery of gold by James W. Marshall at Stutter’s Mill saw a wave of treasure hunters increasing the population growth during that period from 1,000 in 1848 to over 25,000 by December the following year transforming San Francisco into the largest city on the West Coast.

▪  With California gaining its statehood the United States military established Fort Point at the southern side of the Golden Gate and a secondary fort on the Alcatraz Island to ensure the security of the San Francisco Bay.

▪  The San Francisco plague of 1900 through to 1904 was the first ever experienced North American plague outbreak.

▪  Much of the earthquake activity experienced in San Francisco today is attributed to the nearby San Andreas and Hayward Faults and although the city has consistently improved its building codes requiring previously constructed buildings to be seismic retrofitted with the necessary components many of the smaller structures today still remain vulnerable to earthquake damage.

Hosted by Sacramento headquartered Caltrans District 4 website viewers are able to watch from over a thousand traffic cameras monitoring freeway sections across San Francisco, California realtime traffic conditions within the area including current traffic along several highways such as the I 80 SAS Tower and the S680 at PineValley.

Owned and managed by the COX Media Group, the Oakland, California state licensed channel 2 KTVU station has continually served the San Francisco public with the latest in web resources, news broadcasts and traffic conditions in the local area.
Viewers to their website can view the current traffic conditions from the Bay Bridge Caltrans Cams as well as from a number of KTVU traffic cams by visiting some of the links posted below.

The California Department of Transportations commonly referred to as Caltrans in a joint effort with EarthCam networks allows online viewers a breathtaking view of the San Francisco, California Golden Gate Bridge.

Recognized as one of the many Wonders of the Modern World by the American Society of Civil Engineers visitors to the website can view the the iconic bridge and current traffic conditions from a controlled webcam by heading to the link provided below.

Viewers to the Presidio Parkway website can watch a live video stream of the current Presidio Parkway Construction Project from a range of construction cameras offering viewers with three distinctive views in addition to having access to retrieve archived calendar pre-recorded footage.
By clicking on the link below visitors to the website can share, save and watch from a series of time-lapse video streams showing the up-to-date progress refreshed every 15 minutes.

San Francisco Museum of Modern Art Construction Cam
The San Francisco Museum of Modern Art in corporation with EarthCam networks allows viewers by  visiting the link below a current update on the Museum’s expansion progress taken from a live webcam overlooking the 235,000-square-foot construction site from Howard Street refreshing every 15 minutes.

Established in 1992 Map West Inc. mapwest.com website recognized as one of the most prominent publishers for Travel Information and Visitor Guides for the San Francisco area provides online viewers with a live streaming video taken from an webcam overlooking the Alcatraz Island, once recognized for housing some of the most notorious criminals in American history.