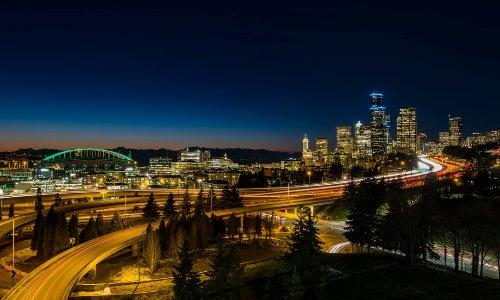 It is estimated in 2012 that 634,535 people resigned Seattle, WA which is the largest city in the Pacific Northwest region. The major gateway for trade with Asia, Seattle is the 8th largest container handling port within the United States.

The video link features traffic along 9th and James in Seattle, Washington. The footage is being filmed from inside of a moving vehicle traveling Northbound. There is slow moving traffic due to an. electric trolleybus which can be seen two cars in front of the narrator’s vehicle. Few cities in North America offer the option of electric trolley buses to their residents.

The traffic camera is facing toward two lanes of incoming traffic and one lane for traffic heading in the opposite direction. Spokane Street Bridge can be seen to the left of the footage.  Also known as West Seattle’s low-level bridge is considered a concrete double-leaf swing bridge containing separate 480 feet long sections.

The bridge extends over Duwamish River which connects Harbor Island to West Seattle. In 1992, The Spokane Street Bridge received an award by the American Society of Civil Engineers for the achievement of Outstanding Engineering. In 1997 the bridge was also featured on the Discovery Channel’s show Really Big Things.

The traffic camera featured is pointed to the left of the276.62 mile highway consisting of multiple lanes of traffic traveling in both directions.  The location featured is along the cities weigh station. The checkpoint is set up on the highway to inspect the weights typically of trucks and commercial vehicles.
The road in Seattle is known as one of the busiest in Washington with an estimated 240,000 vehicles that reportedly travel throughout the highway daily.  Highway I-5  passes through the Olympia Airport. It is stated that I-5 is the only interstate to traverse throughout the entire North-South region on Washington.

The traffic web camera in this video is placed above the busy multi-lane highway. In the video traffic can be seen traveling both north and south bound. Between E. Pike and E. Pine lies not only the oldest black church in Seattle but the first African Methodist Episcopal Church. The church was established in 1891.

Along the streets of E. Pine Street mezzanines, which are used by local coffee houses to add additional seating arrangements for patrons consume a portion of the streets sidewalk. Sidewalk seating in the area provides patrons views of NW downtown attractions such as the Space Needle.

The video featured camera is pointed in front of three lane of incoming traffic. A Do Not Enter Sign can be seen to the left side of the video. The camera is placed in the back of a traffic light which is facing toward the road featured in the video.

The camera is positioned above the traffic which can be seen traveling in both directions of the busy streets.  The Tacoma Narrows Bridge took only two years to be constructed and collapsed four months after it was opened to the public on July 1, 1940. Ten years after the collapsed that occurred on November 7, 1940 the bridge was re­-opened using some of the current bridge items.

Originally the bridge was designed to consist of only two shallow lanes because it was expected to have light volumes of traffic. Items such as an articular reef were used in the construction of the newer bridge as a remembrance to the original.