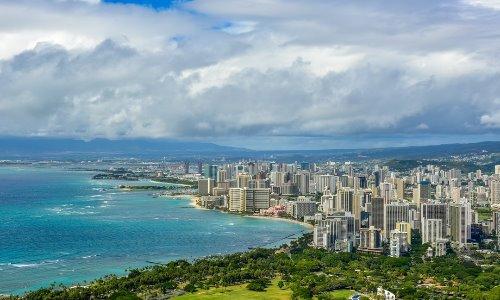 The word Honolulu means “sheltered bay” or “place of shelter” in the Hawaiian language. Honolulu is located on the island of Oahu and is known worldwide as a major tourist destination.

The video below is footage from multiple camera locations throughout the island of Honolulu during the morning rush hours. Dillingham & Kalihi, Likelike & Kam IV RD, King & Houghtailing, Kal Hwy & Ainakoa and several locations on Hwy H1 can be seen on the video.

The video covers several areas where traffic is highly congested. With over one million registered motorists Honolulu current preferred mode of transportation is by way of car which is can be proven by the touch and go traffic. One bicyclist can also be seen.

1. Due to Honolulu’s daily traffic congestion problems, the idea to implement a rail system first was introduced in the 1960’s, however funding was not approved until the year 2005. Thou many believe that the rail system would be beneficial there have been controversy over the rail line which was the dominant issue for local politics leading into the 2008 Honolulu elections.
On February 22, 2011 a ground-breaking ceremony to signal the beginning of construction was held. In October of that same year the Mayor of Honolulu, Peter Carlisle went on the record to say that after the completion of the rail system it will take an estimated 40,000 vehicles off the roads each weekday in 2030.

2. On average Honolulu drivers spend about 58hrs in traffic a year.

3. As of 2012 an annual Inrix Inc. declared Honolulu among the nation’s top 10 cities for worst traffic placing them at number two.

4. In the first three months of 2013 traffic went up by four percent. It is believed that the unemployment rate has a lot to do with the amount of traffic that can be seen especially during typical rush hours.

5. In 1994 Jeremy Harris attempted to implement bus rapid transit which is a high performance public transport bus service which aims to combine bus lanes with high-quality bus ‘stations’, vehicles, amenities and branding to achieve the performance and quality of a light rail or metro system with, the flexibility, cost and simplicity of a bus system.

The video features several locations around the Honolulu area where there is a constant flow of traffic. H-1 which is officially known as Interstate H-1 can be seen from different areas on the traffic cam footage. Interstate H-1 which is an east-west highway begins near the Campbell Industrial Park in the town of Kapolei, Hawaii.

Hawaii highway’s numbering reflects the order in which routes were funded and built. The portion of Interstate H-1 which runs through downtown Honolulu was opened in 1953 as the Mauka Arterial. It was added to the Interstate system after Hawaii became a state on August 21, 1959.

The traffic camera in the link below is facing towards incoming traffic on Salt Lake Blvd & Ala Lilikoi St. Salt Lake Boulevard is the main street in the Salt Lake’s suburban neighborhood of Honolulu, Hawaii on the island of O’ahu.

The Highway is a long surface route that loops around different parts of the island, continually changing route numbers along the way, and shifting from state to county jurisdiction and back again. Farrington Hwy & Laaloa Street is part of The Bus HEA route with several stops along the way.

The sixth camera listed which on the link below is facing towards incoming traffic features the Kam shortened for Kamehameha Hwy & Kaahumanu. The Kamehameha Highway was named after King Kamehameha the Great, who conquered and unified all the Hawaiian Islands in the late 18th and the early 19th centuries.

The Highway begins near Kailua on Oahu’s windward (east) coast, heading north as state route. The Kamehameha Highway is one of the main highways serving suburban and rural O’ahu area in the state of Hawaii. The Highway which extends 31 miles follows the coastline through He’eia and the main commercial district of Kaneohe. This segment of the Highway was formerly known as Route 836.

The traffic camera which is located on the two-lane Ala Moana Boulevard is facing southeast towards Diamond Head’s incoming traffic. Ala Moana which in Hawaiian means “path by the ocean” is the commercial, retail and residential district of Honolulu, Hawaii. Also known as Richards Street Ala Moana Boulevard turns into Nimitz Highway.