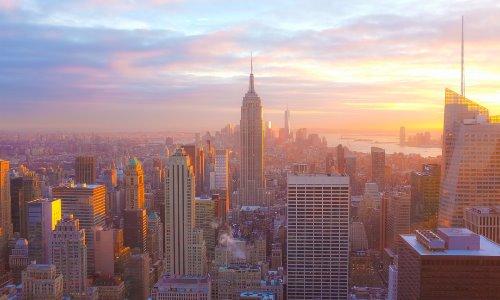 New York City is famous for its traffic.  The video below features the intersection of 32-87 Steinway Street in Astoria, New York diagonally from Rite Aid. The video shows two lanes of traffic flowing in both directions.

There is on street parking on both sides of the street with an outside parking lot which appears to be open to patrons of the business next door.  At the beginning of the video it shows traffic at a stand-still due to a black sedan making a left hand turn into the outside parking structure. This causes some motorist to leave their vehicles to apparently view the cause of the backup. Tight spaces in both directions generated delay in the flow of traffic in this video.

1. It has been estimated that on a typical Tuesday night, about 13,000 cabs travel south from the Upper East Side to a destination between 14th Street and Canal Street; on Saturdays, about three times as many cabs (38,000 on average).

2. Manhattan traffic is at its lowest four days a year allowing motorist to get to their destination faster on New Year’s Day, Christmas, Memorial Day and July 4th.

3. In the year 2010 it was recorded that Thursday, Nov. 13 was the slowest weekday of the year with an average speed of 7.5 mph, which is about the speed of the typical jogger in Central Park. With the exception of holidays such as New Year’s Day, Christmas, Memorial Day and July 4th it was recorded in that same year the fastest weekday at a speed of 11.7 mph was on Monday, Sept. 28.

5. In 2010 The New York Times did an article about the average daily speed of taxis in New York during the week. The article stated that Wednesdays are the slowest at 9.3 MPH, while Sundays are the fastest at 11.5 MPH

1st Ave at 124 St Web Cam
The link below features a live web cam located on 1st Ave at 124 St in east Harlem New York. There are four lanes of traffic traveling Northbound and a street sign posted suggests that the speed limit is 30mph.

One can also assume due to the numerous buses that travel along the far right lane of this intersection that this is part of the Metro Bus route. The street points towards the highway and has one street light located on both sides of the Road which appears to maintain constant traffic but is not as congested as other areas of New York.

The webcam which is located in the median and is positioned towards incoming traffic traveling Southbound on this four lane Road. There is a painted median dividing the four lanes of traffic which is used for left turns and has two medians with trees, benches, and pedestrian paths. It is located in the west-central portion of New York City’s borough of Brooklyn.

The Parkway extends over a distance of about five miles and runs roughly parallel to Coney Island Avenue. Four lanes of traffic facing in the opposite direction can also be seen to the far right. The parkway also has two small parallel side streets.

Because of the large amount of people whom flock to this area at any given time you can find numerous taxi cabs at any given time in this location. This area also features crosswalks to allow pedestrians to safely cross what is known as the world’s busiest pedestrian intersection. The stepped red roof shown of the TKTS booth also provides seating for various events.

There are two lanes of traffic heading Southbound and a third lane for motorist to make left turns. On the right side of the road there is room for on street parking. Since 1985 once a year the Muslim Foundation of America organizes a Muslim Day Parade event that includes a gathering of Muslims at the corner of Madison Ave and 41st Street for Zahur prayer.

Referred as both I-95 and US 1 The Cross Bronx Expressway is considered as a major freeway in the New York City borough of the Bronx. Known in New York as the first highway built through a crowded urban environment it has been expressed that the highway has severe traffic problems and has been blamed for worsening the decay of neighborhoods in the South Bronx.

The Expressway which has a commercial vehicle restriction prohibits trucks to travel thru it Begins at the eastern end of the Alexander Hamilton Bridge. The street cam is positioned diagonally above the expressway which contains a total of four lanes for north and south bound travelers.