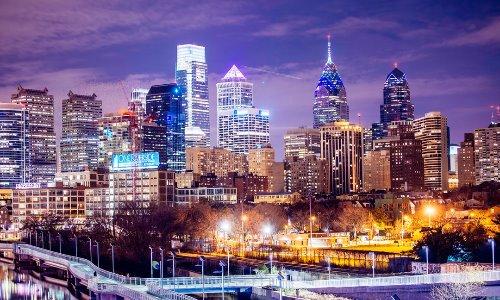 The fifth most populated city in the United States, Philadelphia which is also known as Philly is located in the state of Pennsylvania. Philadelphia has an estimated population of 1,547,607 as stated in a 2012 study performed by the Censes Bureau.

The word Philadelphia is Greek, which when translated to English means Loving Brother. This is where the popular nickname The City of Brotherly Love originated from.
The below video was captured from the intersections of Sansom and Broad Street which is located in the busy downtown area of Philadelphia, PA. Congested streets can be seen in the video as motorist and pedestrians both try to share busy roads.

I-95 at Girard Ave Exit Camera

Interstate 95 is a major route in the city of Philadelphia and is fifty-one miles long. Girard Avenue runs east-west through Philadelphia extending throughout several areas such as Kensington, West Philadelphia, Fishtown and Port Richmond. Trolley, train and subway service is available to those traveling to the area.

The traffic camera footage is of Interstate 95 at the Girard Ave Exit. Girard Station is considered as a popular commercial strip. The station services students of Temple University University who live in the Philadelphia Regency houses. The Philadelphia Zoo which sits along Girard Avenue was the first Zoo located in the United States.

Theodore Roosevelt Memorial Boulevard travels through the North and Northeast areas of Philadelphia and turns into a divided 12 lane highway. State Farm Insurance located at Red Lion Road has deemed the two intersections located on Roosevelt Boulevard as the countries 2nd and 3rd most dangerous intersections.

The camera footage features footage from PA-63 at US-1 (Roosevelt Blvd). The camera is capturing traffic as it travels eastbound on “the Boulevard” thou traffic can be seen traveling in both directions.  Roosevelt Boulevard is notorious for the amount of pedestrian casualties that occur each year especially during the warmer weather seasons.

The George C. Platt Bridge runs throughout S.W Philadelphia over the Schuylkill River. The bridge is named after George Crawford in the year old 1979. Crawford was a hero from the Civil war. On a daily average the bridge carries 56,000 motorists.

The footage located in the video link below shows motorist traveling westbound on the 4 lane bridge. A $42.8 million 3 year project to do repairs and maintenance work on the bridge began in June of 2011. Construction is due to be completed approximately in June of 2014 and will allow safe transportation for both vehicles and pedestrians who utilize the bridge.

Amongst being the second and currently the last bridge that was named after a female the Betsy Ross Bridge was named after the creator of the 1st American Flag. For the typical motorist under the age of 65 traveling on bridge one way toll fee charges are set at $5.00. Those with vehicles that weight exceeds 6,999lb are required to make payments in cash in the amount of $7.00 per axle.
The camera footage below shows southbound views of the Betsy Ross Bridge. The bridge is connected to NJ Route 90 and stretches 8,485 feet long. As of 2000 the 8 lane bridge lost 2 of their lanes changing it to a 6 lane road.

The Philadelphia International Airport also known as the PHL is the largest airport located in the state of Pennsylvania as well as the Delaware Valley. Considered as the 12th busiest airport in the world due to the number of aircraft movements, flight destinations include locations within the United States, Canada, Europe, Latin America, the Middle East and the Caribbean.

Video footage is provided by Action News Sky 6 Cams of sky views of the Philadelphia International Airport. In 2006 a total of 31,768,272 passengers used the PHL for their travels which was an increase from previous years. These increases have caused delays and congestions issues requiring additional parking spaces to be added to the current 17,000 parking spaces.