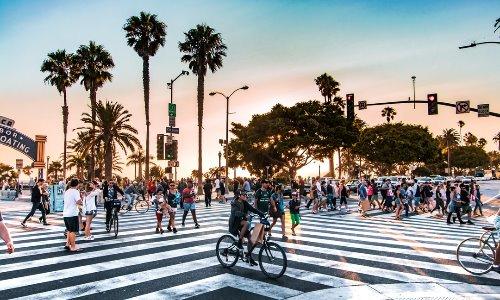 Located in the Southern region of California, Los Angeles was founded by Spanish governor Felipe de Neve in September 4, 1781. After the Mexican war of Independence in 1821 the entire state of California was a part of Mexico. It was not until California was purchased as part of Treaty of Guadalupe Hidalgo was California considered as a part of the United States in 1850.

The video footage featured in the link below was taken on January 11, 2013 and features traffic throughout Inglewood and Marina Del Rey, California. The footage is being taken from the inside of a vehicle that is traveling North on 1-405. The freeway averaged 374,000 daily communicators in 2008 which is the highest in the nation.

The area shown in the web cam is overlooking runway 25 at the Los Angeles Airport.  The LAX (Los Angeles International Airport) is the main airport in Los Angeles. In 2006 the LAX was also declared as being the sixth busiest commercial airport worldwide and was ranked the third busiest airport in the USA.

The VNY (Van Nuys Airport) which is also located in Los Angeles is known as one of the world’s busiest general-aviation airports.  The web cam link provides views of planes such as Air Tahiti and Virgin Airways as they land on the runway.

The link below features five lanes of traffic heading Southbound.  Traffic can also be seen traveling in the opposite direction on the right side of the Interstate. Manchester Avenue begins near the Pacific Ocean then crosses into Inglewood in the city of Los Angeles. Route 110 is divided into 2 segments and is connected by Interstate 110.

Port of Los Angeles and San Pedro connects with Pasadena and Downtown Los Angeles. The increase of traffic in the Los Angeles area has ignited plans to preserve and restore the Pasadena Freeway as a historic landmark.

Cam 102 which is shown in the link below features the McClure Tunnel which passes through Highway 1. East Los Angeles which is located east of downtown L.A. Pacific Coast Highway  is considered a part of Santa Monica, California. There are a total of four lanes. The two lanes are divided by a cement dividers and traffic can be seen traveling in either direction. The tunnel is next to a large building on the right side of the screen as well as a sign above the tunnel. To the left of the tunnel the Tongva Park is being constructed.

I-10 at Western Ave Web Cam
Camera 121 which is featured in the link below features six lanes of incoming traffic and several lanes of traffic heading in the opposite direction. Western Ave is a major four lane street which begins near the Pacific Ocean and is west of Downtown LA. It passes north through Inglewood, South L.A, Lomita, Gardena, Torrance and Baldwin Hills. Eventually Western Avenue ends north of Franklin Avenue in the Hollywood Hills.

Interstate 10 is located in the south east-west area of California and is divided into 4 portions: Santa Monica Freeway, Rosa Parks Freeway, Redlands Freeway or the San Bernardino Freeway.

Downtown L.A Web Camera
The link below features skyline views of downtown Los Angeles which was founded in 1789.  Downtown L.A is known for its theaters, parks, movie palaces, fashion district, government buildings, skid row and other well-known public places. It has been estimated that there is approximately 30,000.00 residents in the diverse neighborhood. With added commuters during the day the population expands to more than 200,000.00 people throughout the downtown area.

Several skyscrapers can be seen in the webcam footage as well as overhead views of the downtown streets. Little Tokyo which is located downtown is comprised of 9% of the Japanese population in Los Angeles.