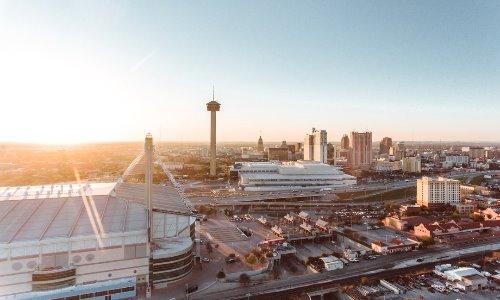 The video in the link below features two congested two-lane highways going in both directions. The motorist in the video can be seen traveling pass signs stating Baptist Univ. Exit 168. Baptist University located in San Antonio was founded in 1947 by then time missionary Paul Siebenmann.

A popular tale that first originated after several deaths occurred in San Antonio in 1836 was of a young boy with blonde hair who is known to appear each February. The boy has been reported to appear in a window upstairs in an area above ground where there is no area to stand on.

Harry Wurzbach was the 1st republican from Texas to be elected for multiple terms since Reconstruction. Wurzbach was Texas 14th congressional representative from 1921 – 1929. He also represented the office in 1930 and was the only Republican from Texas who served in office during this time until his death.
The link below features Interstate Highway 10 at Wurzbach which was named after the republican. Interstate 10 runs east-west at the border of the state of Texas. It was required that the Interstate Highway be split into multiple levels with 3 lanes in each direction to accommodate the abundant flow of traffic heading into the downtown area of the city.

The Alamo which is also referred to as Mission San Antonio de Valero, is a past Roman Catholic fortress compound and mission and the landmark of the Battle of the Alamo. The Battle of the Alamo which occurred sometime in 1836 was built by Antonio de Olivares whom was a Spanish priest. The landmark was created into a museum that is located in what is now considered to be the Alamo Plaza District of Downtown San Antonio, TX.

The video footage below features the now Alamo Mission museum. It was recorded that as of the ear 2002 over 4 million visitors visited the Alamo earning the historic site the title of one of the most popular historic place in the United States.

University of Texas at San Antonio

The video link below features the outside areas of the University of Texas at San Antonio. Traffic can be seen traveling throughout the roads. The University of Texas at San Antonio covers a variety of accredited programs such as Education, Human Development, Business and Architecture. The College of Business was nationally ranked by Hispanic Business, Princeton Review and Business Week. The University business school is 1 of the 40 largest located within the United States.

Downtown San Antonio is the city central business center and is considered as the “urban core” of Greater San Antonio. The area population exceeds 2 million individuals. The “Downtown Loop” which is also referred to as the “Central Loop” consists of a three highways which forms a rectangular route which extends throughout the city.

The video featured below features the intersection of Navarro & Houston which are located in the Downtown area of San Antonio. The views are from the six floor of the South Texas Building. This area is considered as the heart of the city with a variety of attractions such as The Palm, theaters and Fat Tuesday.

JW Marriott San Antonio Hill Country Resort
Founder John Willard Marriott is the Chairman and CEO of the Marriott International which is classified as a luxury hotel chain. The JW Marriott is located twenty minutes away from the International Airport located in San Antonio. The resort has over 1,000 rooms including 85 suites with spacious rooms, bathrooms with custom designed furnishing.

The link below features skyline views of the JW Marriott San Antonio Resort that includes a meeting and event space which is 265,000 square feet and is considered as the most expansive convention and event space in the region.