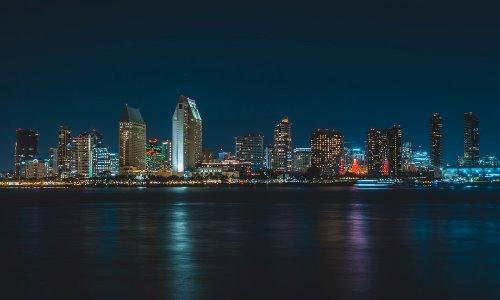 The city of San Diego California exists as one of the major cities within the Unites States of America found along the coast of the pacific Ocean in the southern regions of Los Angeles California adjoining the Mexican border.

Renown as the second largest city in California, San Diego boasts a fast growing population earning the region the rank of the eighth largest city located within the United States of America today and the birthplace of California.

The video link below shows a live broadcast from the Tom Ham’s Lighthouse downtown along the San Diego bay as well as the Bali Hai located on Shelter Island.

Via a live webcam on top of the Pink Palace located on 20th and Broadway facing a westward direction viewers are able to have a live view of the eastern section of downtown San Diego.

The California Department of Transportation (Caltrans) operates over a thousand webcams overseeing a vast number of roadway segments across the state of California through still images and live stream video.

Located on the Pacific Ocean the propertied beach of Del Mar consists of a total area of 1.8 square miles is considered as one of the most desirable beaches in the world with its sub-tropical warm dry summers and gentle winters. Streaming from a high definition pan, zoom and flash cam viewers are able to watch a live broadcast checking out the surf 20th street via Camzone networks.

Established over one hundred and twenty years ago, the Hotel del Coronado with its impressive style and elegance has been a spotlight of what a 5 star hotel should be featured in the video link below.