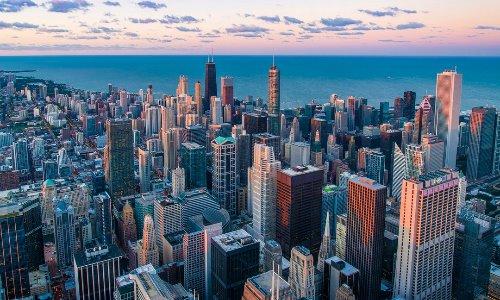 Throughout the downtown area of Chicago there are triple and double-decked streets. Views of the Chicago River can be seen from the eastern areas in downtown Chicago. Streets were elevated so that sewers can be installed to resolve drainage issues and eliminate mud that would form on the streets and properties.

The video below shows the traffic congestion in the downtown area of Chicago, Illinois. The Chicago Tribune published an article on the 3rd of April, 2013 stating that construction will take place over the course of the next four years to resolve congestions issues on the Circle Interchange. The expressway Interchange runs near downtown.

Originally named the Northwest Expressway; the Expressway was re named to John F. Kennedy Expressway one week after the assassination of the United States 35th elected president. The highway features includes a rapid transit line and reversible lanes. The lanes are primary controlled by the use of computers. Workers from within a control center overlook the highways status.

The link below shows traffic camera footage of the Kennedy Expressway and Keeler Ave provided by the Illinois Department of Transportation. Camera shots are refreshed every 5mins alternating between camera views from the northwest and southeast locations of the highway.

The one time tallest building in North America was created in 1973 in the downtown area of Chicago. The Willis Building is a 110 Story Skyscraper which was originally named the Sears Tower. Before it was sold in 1988 the building belonged to Sears Roebuck and Company it was then later renamed by the Willis Group Holdings in 1992. At that time it was given the name Willis Tower.

The camera shown in the link below is from the top of the Willis Building. It gives an overview of the downtown area from the top of the Tower. Visitors of the tower also have the option to visit the Skydeck Marketplace where some of the popular food’s that are native to Chicago can be purchased.

The live web cam featured in the link below sits by cross streets Clark & Addison as well as Waveland & South Avenues. Wrigley Field is contained within a residential area. Surrounding the field is a community area called Wrigleyville where locals are able to dine or grab a drink at the local bar. To the right of the footage stadium parking can be seen below the massive Wrigley Field Chicago Cubs sign.

Local Chicago station WGN-TV is co-owned with local paper the Chicago Tribune and local radio station 720 AM. The cable news is also produced by the Chicago Tribune at the facility which also owns 720 AM. The radio station is categorized as a Talk/News/Sport station and announces cases that involve child abduction, updates on areas that are undergoing a natural disaster and harmful local weather conditions. The station is the Chicago metropolitan resource for Emergency notifications.

The video shown in the link below is the parking lot of WGN-TV station and what appears to be a street along adjacent to the line of trees.