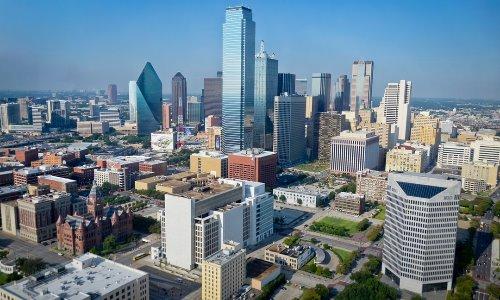 Seen with Forth Worth as one of the Texas major urban areas, the city of Dallas is ranked ninth among the metropolitan areas found within the Unites States of America. The city gained its prominence throughout history as it was recognized as a central position for the oil and cotton industries in addition to its location along several of the railroad lines.

The majority of Dallas infrastructure and population can be found within the county seat of Dallas County with some sections of the city found in within a number of other counties such as Rockwall, Collin, Kaufman and Denton. In a 2010 Census conducted by the United States Census Bureau, the population of Dallas, Texas was estimated at 1,197.816 with a projected increase to 1.241.162 by the year 2102.

Founded in 1841 and embodied in February of 1856 as a metropolitan area, the economy of the city of  Dallas, Texas today is primarily supported by its commerce, banking, computer technology, telecommunications, transportation and energy allowing Dallas to become a consequently centralized by a large concentration of several  of the Fortune 500 companies found within the United States.

▪  Like many of the known cities within the United States, Dallas was founded along a river. The city established along a “white rock crossing” of the Trinity River was thought to allow for the easy passage of wagons crossing the river prior to the introduction of bridges or ferries.

▪  Dallas, Texas is the main center of the largest metropolitan area found inland the United States with no known navigable link to the ocean.

▪  In 1873 Dallas was recognized as a central hub due to its location to a large majority of railroad lines within the area connecting it to the city of Houston and many of the other major cities within the Unites States.

▪  Before Spanish colonists claimed the region as a part of the Viceroyalty of New Spain during the 18th century, Dallas was inhabited by a confederacy of Southeastern Native American tribes known as the Caddo people. The area was also claimed by the French however a proper settlement was never established.

▪ Dallas has a total area of 385.8 square miles making up one-fifth of the larger Dallas-Fort Worth Metroplex area containing more than 25% of the Texas population.

▪  Forbes magazine in its September 2011 issue of “The Richest People in America” recognized the city of Dallas, Texas as home to a total of 17 billionaires, and subsequently ranked as 13th among the best known locations for building a business and career in their 2013 issue.

▪ One of the notable and historic events in the city of Dallas was the assassination of the late President John F. Kennedy on Elm Street on November 22, 1963. As his motorcade continued through the Dealey Plaza of downtown Dallas it is alleged that he was shot and killed by Lee Harvey Oswald from the upper two floors of the building which at the time housed the Texas School Book Depository. Since then the Depository has been converted into a historic museum in recognition go the accomplishments made by the former president during his life.

The Traffic Operations Division of the Texas Department of Transportation is acknowledged for actively monitoring the road groundwork including the placement of traffic signals, lighting, pavement markings and overall transportation structure of the Dallas, Fort Worth region.

The organization additionally responsible for the proposal and development of a variety of safety  measures geared towards reducing the number of road fatalities and injuries from motor vehicle accidents collects and supervises the analyzed crash data which subsequently used for the planning and implementation of several educational programs on highway safety in its promotion of safe motoring practices.

Via their website visitors are able to watch footage taken from a number of webcams showing traffic conditions in the Dallas Fort Worth area by clicking on the link provided below.

Licensed to the state of Dallas, Texas within the United States, the affiliated virtual and VHF digital channel 8 of the ABC television station through their online website allows visitors to gain access to a number of images taken form several traffic webcams located throughout the Dallas area by clicking on the link below allowing access to reported traffic conditions and possible accidents when planning their daily commute.

Located in Fort Worth, Texas, WXnation.com since February 27, 2002 has served as an active and current source for local weather, live cam and traffic conditions within the Dallas area through a series of easy-to-navigate online website pages. With a current link count of over 12,000, the website provides live streaming from several consistently updated webcams positioned in and around the Dallas, Fort Worth area.

The live webcam taken from the far north Fort Worth headquarters of WXnation.com shown in the link below offers viewers a North Easterly view overlooking Fort Worth, Colleyville Grapevine, Texas and Keller in addition to the reserved airspace for the Dallas-Fort Worth International Airport and the Fort Worth Alliance Airport.

Considerably the only live webcam view from the “Sniper’s Perch” this notable live webcam is provided by EarthCam Networks in joint partnership with The Sixth Floor Museum located within the Dealey Plaza. The webcam offers viewers a live HD video stream taken from the southeast window of the prior Texas School Book Depository where it is alleged that the first three shots that killed the late President John F. Kennedy and wounded then Texas Governor John Connally during the presidential motorcade on November 22, 1963 were fried from this very location.